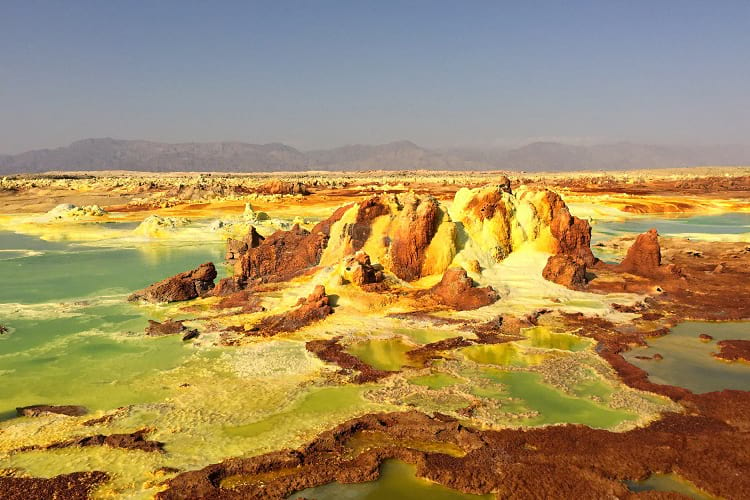 When we talk of places to visit in Africa, Ethiopia hardly ever makes it to the top of the list of the sought after places. Let’s not forget that Ethiopia is the birthplace of the human race, that fact alone should make it, if not the most, then one of the most popular tourist destinations in the world. But even that does not come close to make Ethiopia the most interesting place in the world. There is something else out there, what looks like a piece of an alien planet right here on Earth. What’s surprising is that this place has gone unnoticed for so long.

Dallol, situated in the Northern Ethiopian rift valley called Dalanik Depression, is home to world’s most extraordinary topographical features created by volcanic eruptions over time, the latest being in 2011. Caused by volcanic explosions of a different kind, Dallol crater was formed when the basaltic magma meddled with salt deposits and water which caused a large phreatic eruption. A phreatic eruption is when rising magma makes contact with the groundwater and the magma being extremely hot, causes the water to evaporate immediately. This led to a huge explosion of rocks, ash, water and steam as well as volcanic bombs (the molten rock gets cooled and solidifies before hitting the ground).

This volcano is surrounded by mountains of Sulphur, salt pillars, small gas geysers along with acidic hot springs and pools of acid separated by salt ridges. Put all these together and you get one remote uninhabitable place with one of the most bizarre and colorful landscapes in the world. A great variety of dazzling colors are seen at the site. White yellow, green and red ocher because of sulphur, iron oxide, salt, and other minerals. 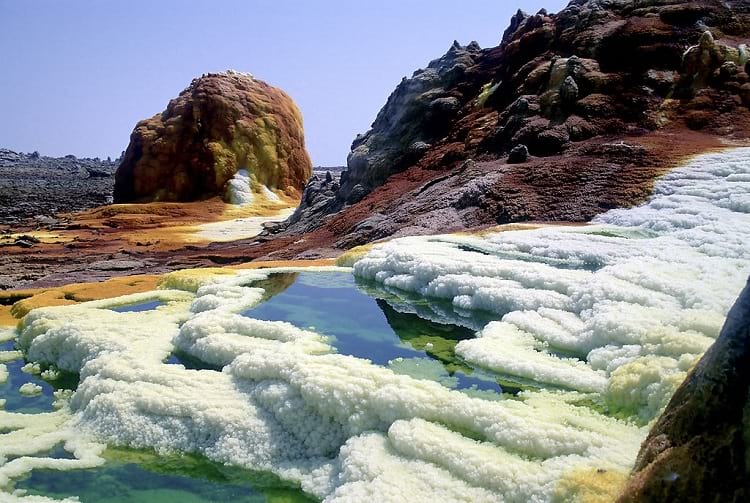 A great variety of dazzling colours are seen at the site because of acid, salt and minerals. (Hervé Sthioul / Wikimedia Commons)

A huge salt desert surrounds the volcano, the edges of which are covered with a swarm of fairy chimneys where gases have broken through. The hot springs of sulphur foam at boiling point. The salt from the Danakil Depression, which lies 410 feet below sea level, mixes with minerals like sulfur and iron, to create a terrain of extraterrestrial concretions. The site is embellished with geysers and chimneys throughout.

While the list of reasons for visiting Dallol if not long is interesting and colorful enough, the reasons to stay away from are equally interesting. It is not just the alien backdrop and the name which literally translates to disintegrated, that keep people from living here, Dallol also holds the record for the highest average temperature ever recorded for an inhabitable location.

Starting from 1960 to 1966, Dallol had the average temperature of 45°C. The environment is hostile to humans because of the unbearable heat and the possibly toxic fumes that fill the air. 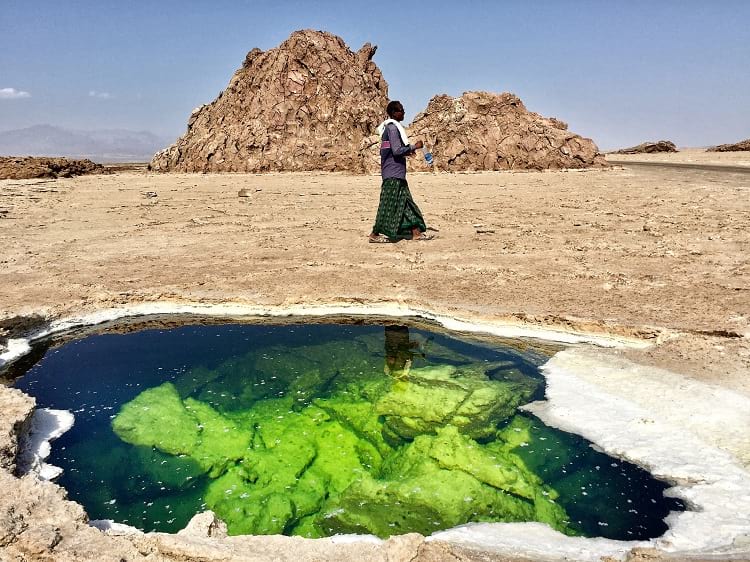 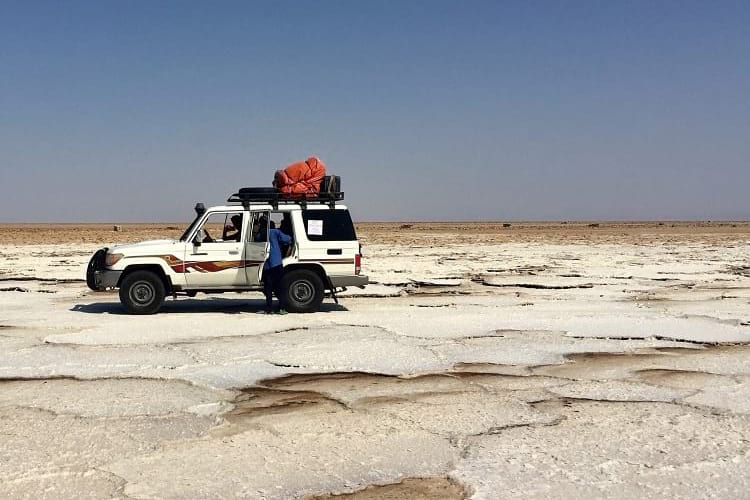 4×4 is the preferred mode of transportation to reach the required destination. (Michael Meraner / Flickr)

The fall of Haile Selassie, former emperor of Ethiopia in 1974, was followed by political instability accompanied by coups, uprisings, drought and famine in the country for a next few decades, discouraging tourists from visiting Ethiopia. The tension between Ethiopia and Eritrea does no favours either for the tourism in this region.

The number of people visiting this region every year is limited to just a few hundred. Reaching there is no easy task in itself even if you do away with all the safety concerns. You can either get there by hitching a lift on one of the camel caravans which passes Dallol, or you can rent a 4-wheel-drive from Mekele, a nearby town, which is a one day drive.

Maybe it is the isolation that has been enjoyed by Dallol has helped preserve the landscape for this long.