The Batu Caves are amongst the most famous natural attractions in Malaysia, composed entirely of limestone and being home to a diverse range of fauna. Additionally, they are renowned for housing the Batumalai Sri Subramaniar Swamy Devasthanam, a temple dedicated to Lord Murugan, within them. Every year, thousands of Hindu devotees from around Malaysia, India, and the rest of the world visit this temple and particularly during the famous Thaipusam festival in late January or early February. The most famous limestone caves in Malaysia

The Batu Caves are located approximately 12 kilometres to the north of Kuala Lumpur in Gombak district in Selangor in Malaysia. They are over 400 million years old and get their name from the Sungai Batu or Batu River that flows past the hill. For centuries, the indigenous Besisi people used these caves as temporary shelters while they were out hunting in the region. At other times, the caves remained uninhabited and became home to a diverse range of fauna.

In the 1800s, many Chinese arrived to settle and work in Malaysia. Around 1860, some of these workers discovered that there were extensive guano deposits—bird and bat droppings—in the Batu Caves. They began frequenting the caves to collect the guano; they used it as fertilizer in the fields to grow vegetables.

In 1878, the American naturalist, William Temple Hornaday, came upon the Batu Caves while he was out hunting. He was drawn to them by the smell of the guano and, upon going into the caves, was very impressed. He likened the largest cave to a grand cathedral. Around this same time, the British Colonial Authorities also took note and officially recorded the caves. 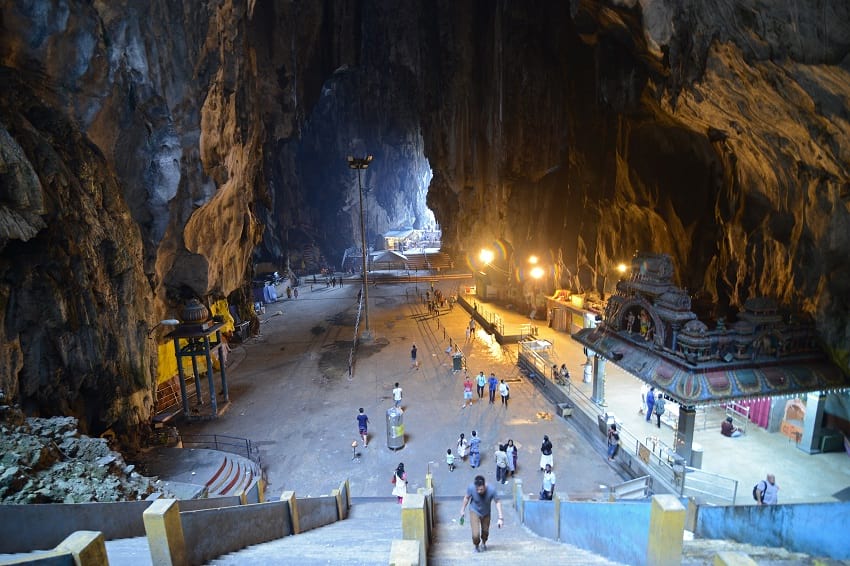 Steps leading to the inside of the cave. (Jorge Láscar / Flickr)

Rising to a height of nearly 100 metres above the ground, the Batu Caves Complex consists of three main caves and several smaller ones. The largest cave is known as Temple Cave and is at the top of the hill and you need to climb up 272 steps to reach it.  The other two main caves, the Art Gallery Cave and the Valluvar Kottam Cave or the Museum Cave, are at the base of the hill. There is another cave, known as the Dark Cave, en route to Temple Cave. Then there is a cave known as the Ramayana Cave that lies to the extreme left of the hill’s sheer wall. 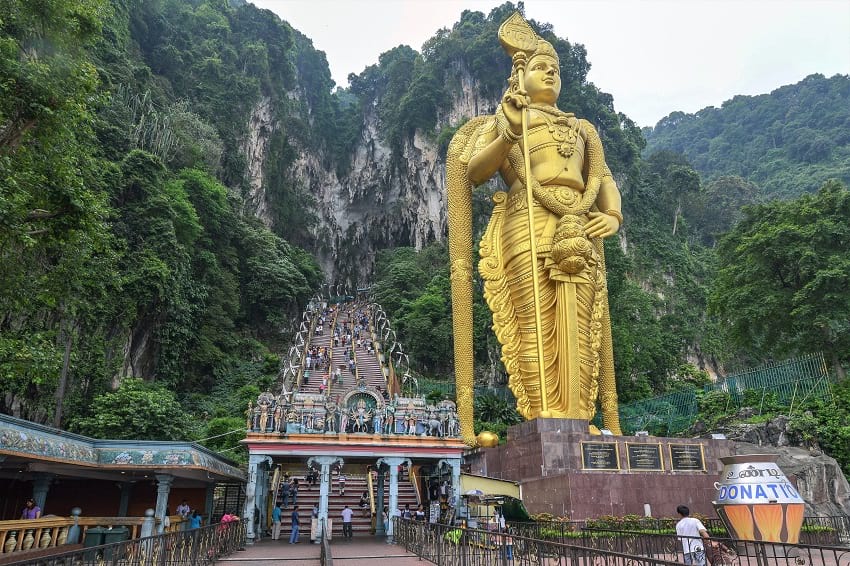 On the left are the 272 steps leading to the Batu Caves and on the right is the statue of Lord Murugan. (Jorge Láscar / Flickr)

There is another impressive statue, that of Lord Hanuman, the Monkey God and aide of Lord Rama, in front of the Ramayana Cave. This statue is 50-feet tall, and the temple authorities installed it on November 2001.

As William Temple Hornaday noticed on his visit, the Temple Cave has a level floor and perpendicular walls and a soaring roof that is open to the sky. It is 50 feet wide and 60 feet high, with the higher point of the roof rising up to 100 feet.

Thambusamy Pillai, an Indian trader of Tamil origin in Malaysia, noticed the vel-like shape of the entrance of the Temple Cave and decided to dedicate a temple to Lord Murugan. In 1891, he installed the murti of Sri Murugan Swami in the Temple Cave. A year later, in 1892, the Thaipusam festival was first celebrated there.

When the Temple Cave was first opened to Hindu devotees, they had to reach it by scrambling up the rocks strewn on the hill. In 1920, the Temple Authorities had wooden steps constructed to make it easier for the pilgrims to reach the temple. Later, they replaced these wooden steps with concrete steps. You can reach this concrete stairway via a zigzag bridge. The stairway has many landings, both to give a breather to the weary and the elderly. The stunning paint job to the steps leading up to the Batu Caves. (Marco Verch / Flickr)

The Valluvar Kottam, the Art Gallery, and the Ramayana Cave

These caves are well-known for their spectacular murals showing scenes from the Hindu epics, the Ramayan and the Mahabharata. Some of the murals show scenes from the lives of ancient Tamil poets and reproduce their poetic couplets. The murals are lit up with many colorful lights, creating a somewhat psychedelic effect. There are also several statuary exhibits. In the courtyard outside, there is a statue of a five-legged bull that once lived with a herd of cows on the temple grounds.

En route to the Temple Cave, there is pristine cave known as the Dark Cave. It leads into a two-kilometre network of relatively untouched caverns that are filled with stalactites and stalagmites. Formed over 2000 years ago, these form intricate formations that make for a dramatic sight. To preserve the cave’s ecology, the Malaysian Nature Society limits the visits to a few guided tours.

Many of the undeveloped limestone caves are home to the Trapdoor or Liphistius batuensis spiders that are on the verge of extinction. Naturalists believe that the only thriving population of these spiders is in the Batu Caves. There are also cockroaches, Eonycteris bats, fruit bats, long-tailed macaques, butterflies, and other diverse fauna in the caves.

While thousands of people visit the Batu Caves daily, their numbers swell to millions during the Thaipusam festival in late January or early February. During the festival, devotees organize a procession that begins in the evening from the Sri Mariamman Temple in Kuala Lumpur and arrives at the Batu Caves at dawn the following day. Many of the devotees then take a bath in the Sungai Batu river. They carry kavadis filled with milk offerings for the god, and some of these kavadis are huge, weighing more than 100 kilograms. 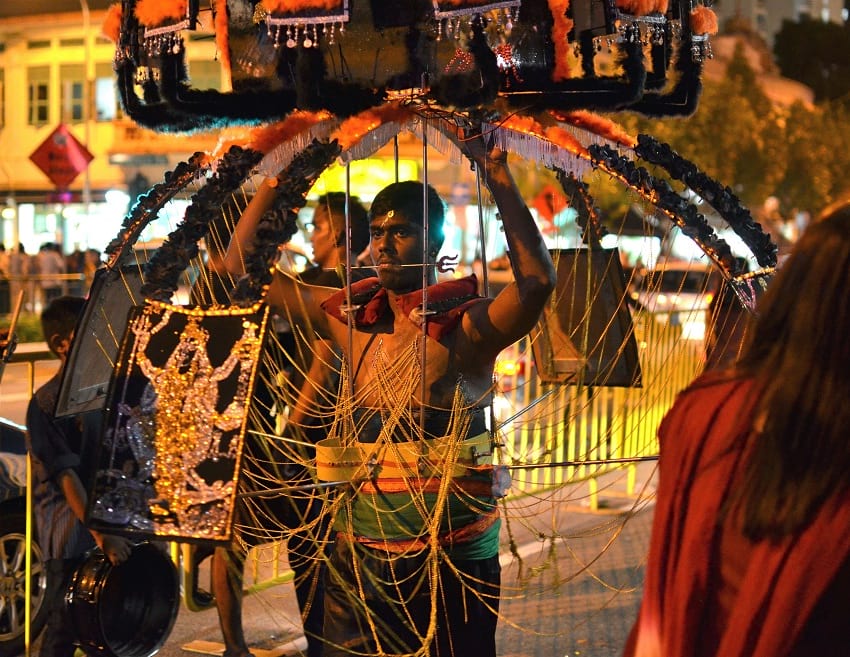 The kavadis are decorated with colourful flowers and peacock feathers, and the devotees carry them by balancing their ornate wood or steel frameworks on their shoulders. Many devotees pierce their skin, cheeks, and tongue with metal hooks and skewers that extend from these frameworks. They carry the kavadis in this manner all the way up the 272 steps to the Temple Cave. It is a way of showing their devotion to Lord Murugan. Additionally, devotees, who have had their wishes fulfilled by Lord Murugan, show their gratitude by shaving their heads and offering their hair to the god.

Enjoyed this article? You would also love “Cave of the Crystals: A Geological Wonder with Giant Shimmering Crystals“

Previous Article
ʻOumuamua: A Mysterious Interstellar Rock Discovered in Our Solar System
Next Article
Leonarda Cianciulli: The Ill-fated Correggio Killer who Made Soap and Cookies of Her Victims