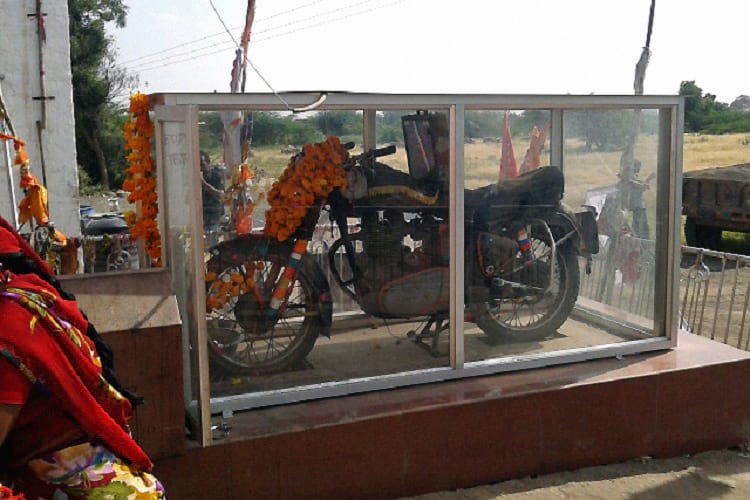 Trust the state of Rajasthan to give you soulful of the physical and the metaphysical world. Be it a brother-sister saint couple of Jeen Mataji temple at Sikar, or the ghost-ridden Bhangarh fort in Alwar, or the Saint Swaroopnath of Singhana who buried self, while still alive, to atone for having killed a cow inadvertently. The list is long and includes an aficionado of Bullet bike, named Om Banna who died in an accident at Pali. When the bike was lifted to a new location, it came back, mysteriously, to the accident site. Perplexed people in neighbourhood read divine intervention into it and made a temple, with a motorcycle as the presiding deity.

The accident resulted from the fog of the winter morning

It was a cold and foggy morning of 23rd December 1988. Om Singh Rathore, a young man, aged 21 years, decided to meet his friend and went out on his Bullet motorcycle. Heavy fog on way impaired visibility and he collided with a tree on the wayside. The impact was hard and the head injuries killed him on the spot. His bike rolled and fell into a close-by a ditch. Police were informed and the bike was shifted to a police station and rider to a hospital which declared him brought in dead (BID).

On day-2 of the incident, the motorcycle was found missing from the police station. The search conducted led to startling revelation. The two-wheeler, Royal Enfield Bullet, was found lying at the site of the accident. The bike was ferried back to the police station where it was kept with more caution. One, its entire fuel petrol was drained out. Two, it was bound with chains all around. Still, on day third, bike disappeared from the police station. Again, it was found at the same location where the accident happened. This to and fro, say the locals in the area, happened a few times more till the police handed over the bike to the family of diseased.

Bike returned even from its buyer in Gujarat

The bereaved family took possession of the bike and sold it to a man in Gujarat. But the translocation happened yet again. The Bullet bike was spotted at the same place in Rajasthan where the accident happened.

Transmigration of the motorcycle made it an object of worship

The locals of the area concluded that it was no ordinary motorcycle but one with some spiritual force behind it. As such, it was worthy of reverence and even worship. Accordingly, they approached the Banna family and requested that the motorcycle be handed over to them. They would make and temple in the memory of the biker Om Banna, and place the Bullet bike in the sanctum sanctorum of the temple. Events moved fast, and a temple came up close to the tree that felled the biker, leading to his death. Locals worship the bike and vouch for its spiritual dimension. Like, they say, the engine of a bike comes alive on its own. And then, after sometime, it gets switched off, automatically. Rumours suggest that those who pass by the temple without paying their respect, face a rough journey ahead. Maha Prakrami Singh, the son of the late Om Banna believes that the spirit of his departed father lives with his worldly bike. The spirit, he says is benevolent to bikers passing on the highway, and helps them when they are in any kind of trouble. 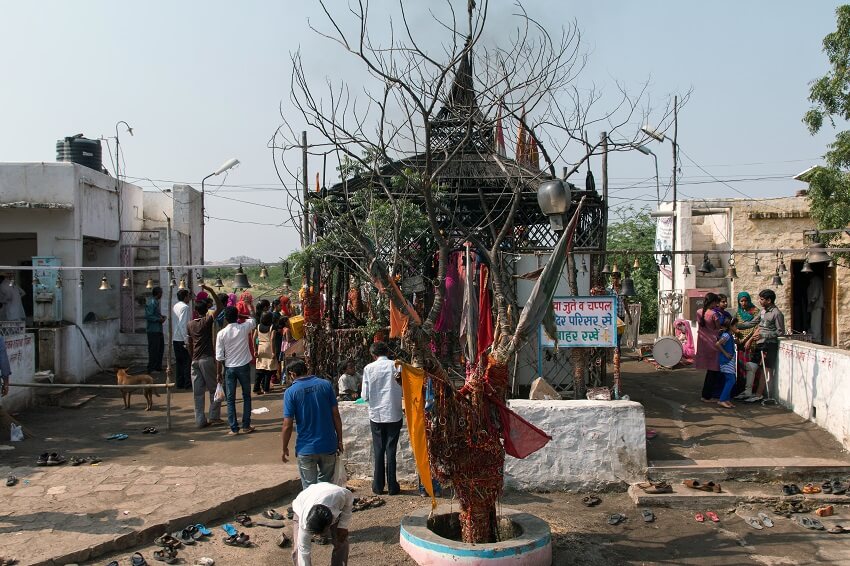 A good number of people visit the temple daily and the ambience inside and outside of the temple is like any holy shrine held in high esteem. Devotee burn incense sticks, offer bangles, flowers and scarves, and distribute sweets.

Located close to National Highway 62, Om Banna temple is approachable via Jodhpur, and through the Railway Junction, Pali.

Previous Article
Incredible Snake Island: One of the Most Uninhabitable Places in the World
Next Article
British Overseas Territories: Modern Remnants of a Colonial Past