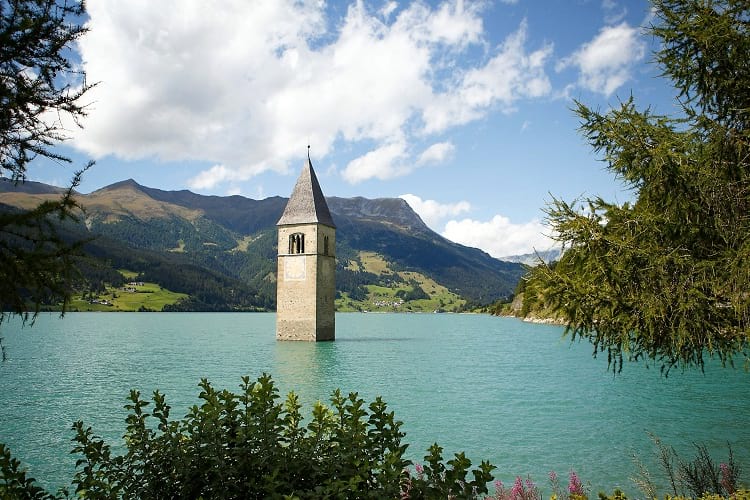 Lake Reschen, an artificial lake in South Tyrol, Italy, is known for carrying a submerged town at its bed. The only visible part of the submerged town is a steeple of a 14th-century church peeping out above the surface. The steeple can actually be walked towards during winter when the water freezes. The lake is considered the largest in the province due to its capacity of 120 million cubic meters, and its surface area of 6.6 sq. km. makes it the largest in the Alps. 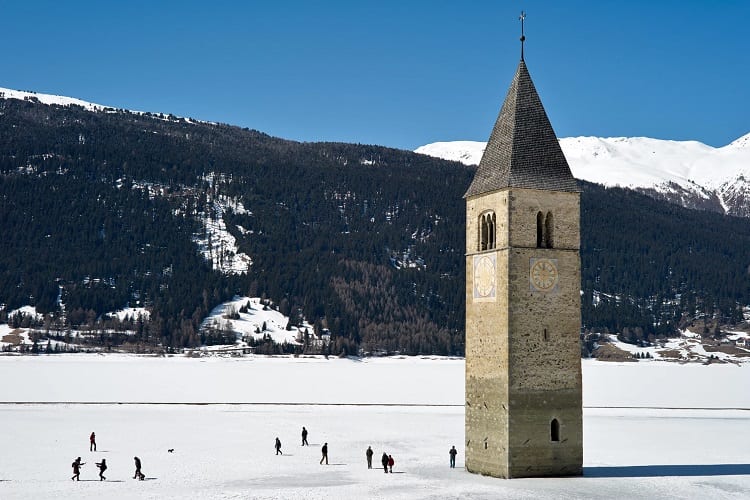 Planning for a smaller artificial lake started back in 1920, but in 1939 a new plan for a much bigger and deeper lake was introduced. The newer plan would merge two natural lakes, but it would mean submerging multiple villages. Construction for the newer lake began in 1940 but due to resistance from the locals and the development of Second World War, it was not completed for another decade until 1950.

In July 1939, the Edison Energia Company came up with a better plan for an artificial lake than the one in 1920. This newer plan aimed at a depth of 22 meters, and would merge two existing natural lakes – Reschensee and Mittersee. The plan would allow construction of a dam by creating this artificial lake for supplying electricity in the region. However, this would, unfortunately, submerge multiple existing villages which would include those of Graun, Reschen, Arlung, Piz, and Stockerhofe. Almost a decade later, after intense resistance from the villagers, the company received funding for construction of a dam that would help create the lake.

For the construction of this lake, over 150 homes were destroyed and over 1200 acres of land had to be submerged. An entire village and town with roads, shops, and schools are sitting at the bottom of the lake. At the time, church bell towers were the tallest structures because as a symbol they were supposed to be closest to heaven than any of the structures in the village. The lake was also not made so deep as to submerge the church steeple as well and hence is the only structure still visible over the surface.

The lake has attracted a lot of tourists, thanks to its unique focal point. The fact that the steeple is visible from an arm’s length distance during the winter when the lake freezes over is just an added bonus. The lake may have started to receive attention initially due to the church steeple that pokes out, but the area itself is now renowned over the world for activities that take place around it. Tourism agencies have tried to monetize on the lake’s uniqueness by providing fishing, ice-skating, snow-kiting, kite surfing, walking and cycling tours in or around the lake. 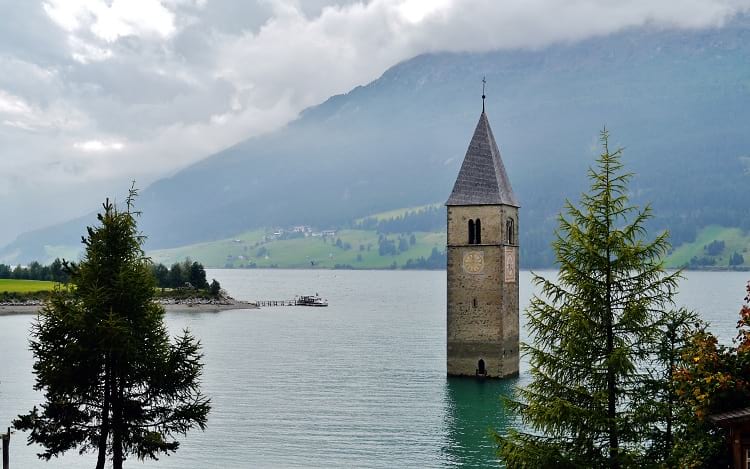 There are multiple creepy legends about the church bell tower still floating among the locals which get through to the tourists sometimes. The most popular one is the one where the church bells are heard ringing during winters. It is said that these bells are heard during the darkest of hours and the coldest of winters. This is creepy because the very bells of the tower were removed almost 70 years ago when construction for the lake began.