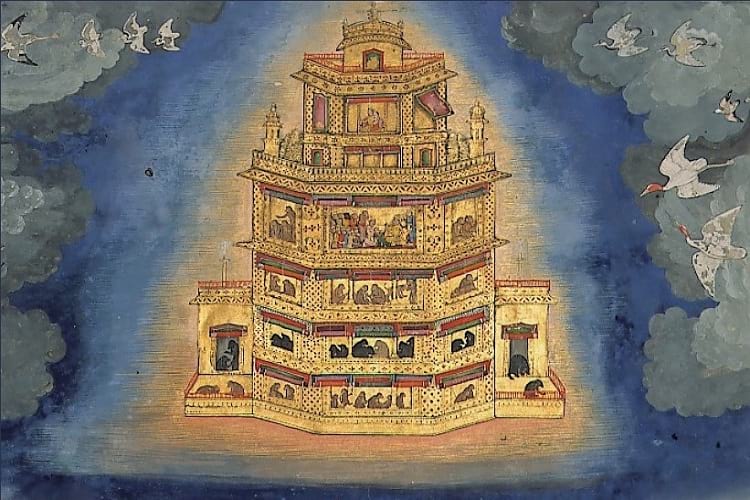 The Vaimanika Shastra is a Sanskrit text about ancient Indian flying machines or vimanas. While many ancient Indian scriptures mention vimanas and give elaborate descriptions of their workings, this is a more recent text that describes the ancient flying machines in detail. Yes, the Vaimānika Shāstra is not an ancient text. Or, at least, it is supposed to be by an ancient author, but comes to us through a modern medium. An Indian mystic Pandit Subbaraya Shastry claimed he had received the book as a divinity from the ancient sage Maharshi Bharadwaja and he then dictated it to his associate Shri G. Venkatachala Sharma. The dictation and transcription of the book lasted from 1918 to 1922. It was translated into Hindi in 1959 and into English in 1973.

The book’s focus is on the vimanas that were mentioned in many ancient epics like the Rigveda, Mahabharata, Ramayana, and others. According to the Vaimanika Shastra, these vimanas were not flights of fantasy of the ancient authors, but actual and aerodynamically viable flying machines. The ancient Indians not only knew how to fly, they also flew in highly sophisticated machines with many capabilities. Using mercury vortex engines, these vimanas could become motionless in mid-air and could make themselves invisible. When used in war, they could render the enemy forces unconscious and spy into the insides of enemy crafts.

The text includes information about piloting these vimanas and the aerial routes that could be taken. It mentions the food that could be eaten and the clothes that could be worn aboard the vimanas. It states the metals that were used to manufacture the vimanas and explains how these metals were produced. It describes mirrors fitted on the vimanas and their use in wars. It talks about different airplane machineries as well as different plant categories like mantrik, tantrik, and kritak. It also lists four planes – Shakuna, Sundara, Rukma, and Tripura – from the kritak category.

Origins of the Vaimanika Shastra

According to Pandit Subbaraya Shastry, Maharshi Bharadwaja is the real author of the work; it is indeed written as such. Apparently, Panditji was only the conduit for presenting the book to humankind. The verses would come to him in sudden flashes of inspiration and his associate Shri G. Venkatachala Sharma would then immediately transcribe them. This continued over a long period until the entire book was written. Sometime between 1900 and 1919, Panditji asked Ellappa, a draughtsman from an engineering college, to illustrate the manuscript with technical drawings of the vimanas.

Shri Shivkar Bapuji Talpade, who was a technical instructor at the J.J. School of Art in Bombay, became acquainted with Pandiji and created models of the planes with Panditji’s direction. He was unable to make them fly, however. Incidentally, Talpade was first modern Indian to build a flying machine that he named Marutsakha and flew on the Chowpatty beach in Bombay in 1895.

Panditji’s son, Shri Venkatrama Shastry, kept the original, illustrated manuscript after his father’s death in 1941, but Panditji’s followers distributed copies of the book amongst themselves and their circles. An Indian air force officer, Air Commander Goel, first read it in 1944, and apparently gave it to the Baroda University Library.

In 1951, a certain Shri Josyer founded the International Academy of Sanskrit Research and organized an exhibition of rare Sanskrit manuscripts at its inaugural event. Shri M.C. Krishnaswamy Iyengar, who knew Panditji, provided a copy of the Vaimanika Shastra for this exhibition and it generated a good deal of interest. Shri Josyer then contacted Shri Venkatrama Shastry and acquired the original manuscript. He translated it into English and made it available to the wider public.

Pandit Subbaraya Shastry was born in Hosur taluka in Madras District in an impoverished family. He was married by the age of eight, as was the custom in those times, and several years afterwards, his parents died and the responsibility of supporting his many siblings fell upon his young shoulders. The only way he could do this was by begging. For a brief while, his father-in-law took in the family, but then they had to leave and fend for themselves once again. In these dire circumstances, they contracted smallpox and Panditji lost his sisters and one of his brothers to this disease. He himself became gravely ill and his surviving brothers abandoned him.

He would probably have died if he hadn’t been rescued and treated by a certain Guruji Maharaj near Kolar in Karnataka. Under the Guruji’s care, he recovered from the illness and took his first steps in the realms of spiritualism and mysticism. He never received any formal schooling, but learned to read and write Telugu and Kannada while he was with Guruji.

When he had completed recovered, he went to Anekal and lived there with his wife and the son they adopted some years later.

It should be mentioned that Panditji was an individual with an unassuming and unpretentious disposition. Over the years, he developed a wide circle of acquaintances, including the Indian scientist Jagdish Chandra Bose, and none of these people ever cast a doubt on his intrinsic sincerity.

The problems with the Vaimanika Shastra

While it would be a stretch to call Panditji a trickster or a charlatan – since he never showed any such traits in his entire life and the people who knew him appear to have regarded him with nothing but respect – there are several problems with the Vaimanika Shastra that cannot be disregarded. In the first place, if it had really been an ancient text, it would have used ancient Sanskrit. The text, however, is in modern Sanskrit with a sprinkling of ancient terms.

According to many aeronautic experts, there are several practical problems with the planes depicted in the Vaimanika Shastra. Let us look at some of the planes: 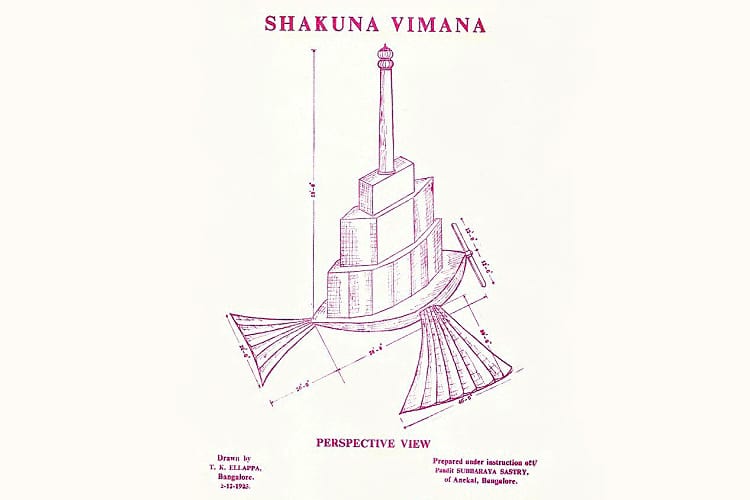 It is shaped like a bird and is made up of a floor board, a hollow mast, three hinges, four heaters, air suction pipes, heat engine, cylinder, piston gear, pumps, two wings, and one tail portion. The latter is apparently essential for lift-off. It is made of ‘raja loha’, an alloy made of several different materials, and has an 80-foot height and 56-foot length. The exact principles of operation are not mentioned, but the height and width dimensions of the vimana are likely to make it unstable. 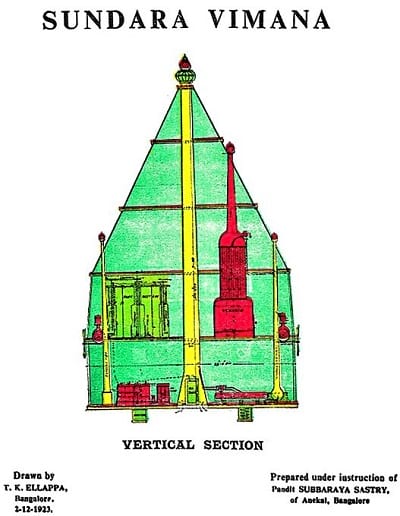 This is a cylindrical cone, three-tier vimana possessing a ground plate and an outer cover. It has a heater, an electricity generator, and five gas engines. There is also a metal pipe wind blower.

The electricity generator produces electricity by means of friction, heat, solar power, and water power; the text also mentions 16 ‘drona’ of donkey urine for electricity generation. The electricity vaporises oil. The vimana also generates steam. The steam and the oil vapor mix to produce 500 ‘kaksha’ heat which passes through a ‘shundala’ or elephant trunk pipe and creates propulsion forces.

The plane is supposed to lift off by sucking hot air from the bottom and releasing it from pipes at the top, which contradicts Newton’s Laws of Motion. If it manages to fly, however, it can, according to the text, cover 400 yojanas in one ghatika. 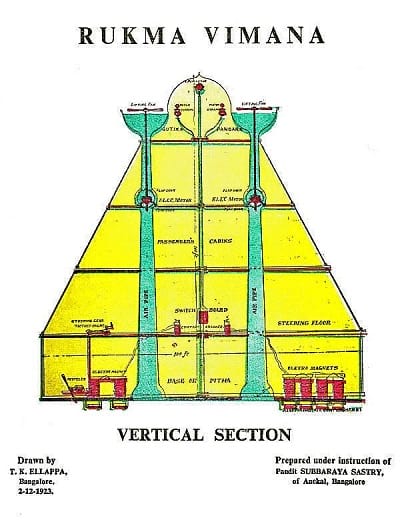 A five-tier vimana, with passenger facilities on the third tier, the Rukma vimana comes in a cylinder cone shape, with a 100 or 1000-foot base dimension, a 20-foot height, and an 80-foot cone height. It is made of raja loha and various other materials and has electrical tube wheels and lifting fans. Its power generator operates on solar power. It can attain a speed of 105 krosha per ghatika. 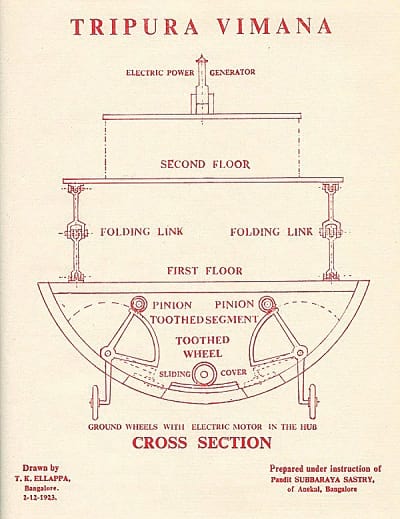 Along with flying in the air, the Tripura vimana can move on land and water. It has wheels for land travel and these wheels are retracted when it moves in the water. The text does not provide its exact operational principles, but its power generator utilizes solar energy. It is an oval-shaped vimana, with a 100-foot length, 24-foot width, and 30-foot height. It is made of a light, fire resistant alloy.

So, can the Vimanas fly?

The researchers from the Indian Institute of Science in Bangalore, who carried out a study of the Vaimanika Shastra in 1974, expressed scepticism about the flying abilities of these planes. According to them, the geometries and the propulsion principles of the planes are too bizarre to make flying a possibility. At least, not by any currently known flying methods. Who knows, maybe the ancient Indians had advanced methods that we haven’t yet discovered. It is a pity that these weren’t clearly delineated in the text of the Vaimanika Shastra.

The Vaimanika Shastra in popular culture

In 1878, Dayananda Saraswati wrote a commentary on the Rigveda, which was published in 1929 as “Rigveda Bhashya Bhumika”. In this, he describes how flying machines operate and these descriptions are more in line with Newton’s Law of Motions.

In January 2015, the Vaimanika Shastra was mentioned in presentations made by a pilot Anand J. Bodas and Ameya Jadhav, a researcher with an M.Tech and an M.A. in Sanskrit at the 102nd Indian Science Congress at the Mumbai University. Shri Bodas informed the news media that, in Vedic times, huge-sized vimanas could fly in a variety of modes from country to country as well from planet to planet. This declaration riled the NASA scientist, Ram Prasad Gandhiraman, and he started an online petition to throw out this ‘pseudo-science’ presentation.

The Vaimanika Shastra is mentioned in ‘Prapaatha’, a 2015 Kannada film, and in ‘Hawaizaada’, a 2015 Hindi film.

Enjoyed this article? Also, check out “The Curious Disappearance of the Baghdad Battery: A Parthian Period Relic, An Oopart“.