Sedlec Ossuary: The Famous Bone Church of Kutná Hora in the Czech Republic 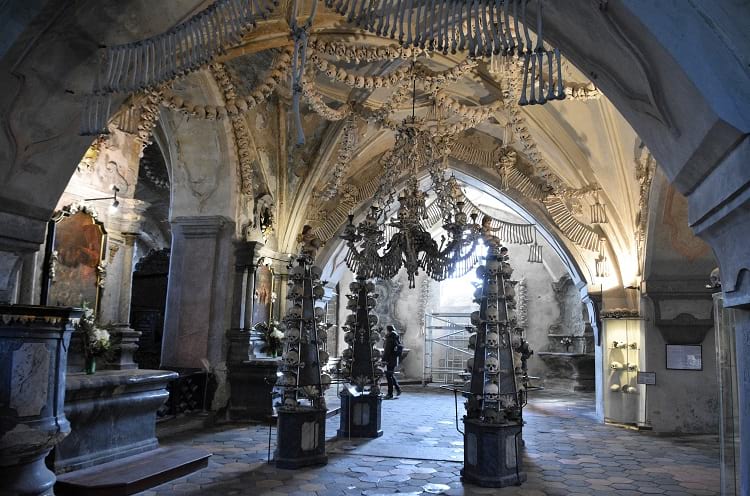 Imagine walking into a Church and finding the interior decorated with human skulls and bones. It sounds like something right out of a horror film, but, actually, there is such a church in Kutná Hora in the Czech Republic. It is called the Bone Church, otherwise known as the Sedlec Ossuary. The Roman Catholic chapel contains bones from around 70,000 skeletons and these bones have been decoratively arranged for maximum aesthetic effect.

Is the result macabre? Strangely enough, no. Most visitors remark that the Sedlec Ossuary has a very tranquil atmosphere. It remains a holy place of worship and, even with the displayed human bones, visitors don’t generally appear to experience any feeling of unease. 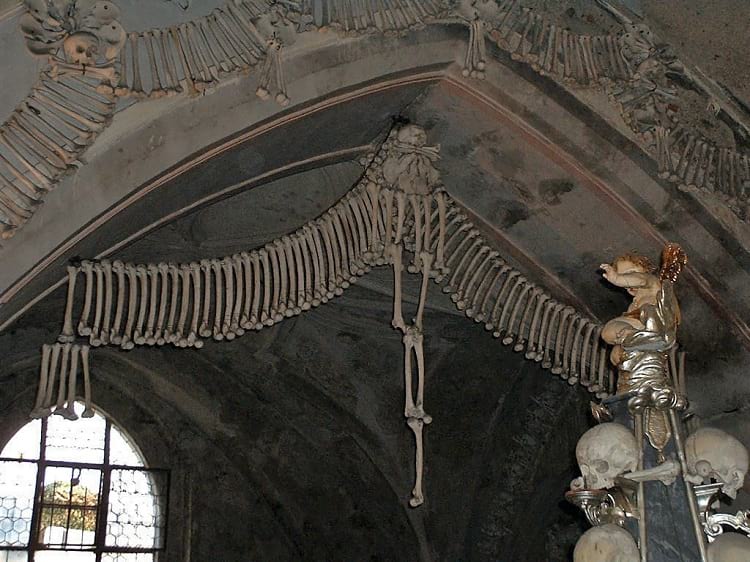 Sedlec is a suburb of the Czech town Kutná Hora, and it was once the site of the Sedlec Abbey. The Cemetery Church of All Saints was once part of this former Abbey. Underneath this Church is the Roman Catholic chapel that is widely known as the Sedlec Ossuary or the Bone Church. Constructed in a medieval High Gothic style, the Church has a vaulted roof and three towers. When you step into the chapel underneath, you realize what a really unique place it is.

The interior of the chapel is decorated in an artistic way with human bones. The two artworks that will immediately catch your eye are the Chandelier of Bones and the Schwarzenberg family’s Coat of Arms. Both are large and prominent and made entirely of bones. The Chandelier of Bone is supposed to contain every single bone that is present in the human body. This Chandelier hangs in the chapel’s center. 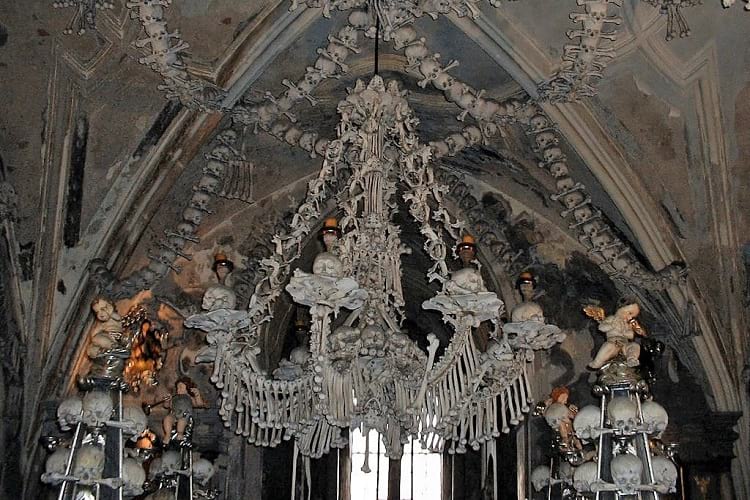 A chandelier made entirely of human bones at Sedlec Ossuary. (Ray Schauweker / Flickr)

How did the bones end up in the church?

In 1142, a Cistercian Monastery was established in Sedlec. The monks that came to reside in this Monastery undertook the work of maintaining and cultivating the lands around the Monastery. In 1278, Bohemia’s King Otakar II asked the Abbot of Sedlec, Henry, to go on a pilgrimage to Jerusalem in Palestine.

When the Abbot returned from his pilgrimage, he brought with him some of the holy earth from Golgotha, the site where Jesus Christ was crucified. The Abbot sprinkled some of this earth all over the cemetery of Sedlec Abbey to consecrate the ground.

As soon as the word of this act got around, people started arriving at the Abbey with their sick, dying, and dead relatives. They wanted them buried in the now consecrated ground. The cemetery of Sedlec Abbey suddenly became Central Europe’s most sought-after burial place.

Two catastrophic events sweeping through Europe – the Black Death of the mid-14th century and the Hussite Wars in the early 15th century – caused the Sedlec Abbey cemetery to receive thousands of bodies for burial and it became necessary to enlarge the cemetery.

According to historical records, at least 30,000 people died in Sedlec from the plague and were buried in the cemetery. Most of the people were buried in mass graves as, given the high death rates at the time and the necessity of disposing of the bodies quickly before they spread the dreaded disease further, it was not possible to dig individual graves for everyone.

Around 10,000 people died and were buried in the Sedlec cemetery during the Hussite Wars. Kutná Hora fell to the Hussite army in 1421, and the Hussites attacked the Sedlec Abbey, plundered the Cistercian Monastery, burned both the Monastery and the Cathedral, and despoiled the cemetery.

The Gothic Church, with an upper vaulted level and a chapel on the lower level, was built around 1400 in the central part of the cemetery. During the construction of this Church, many of the mass graves were disturbed. The bones that were unearthed in the process were collected and stored in the chapel. Later, when old graves were dug up and their contents removed to make way for new burials, the recovered bones were also stored in the chapel.

According to local lore, in the early 16th century, a half-blind monk was put in charge of exhuming bones and arranging them decoratively in the chapel, and, after completing the task, his vision was restored. The Church of All Saints underwent some major renovation and rebuilding in the early part of the 18th century, with the architect Jan Blažej Santini-Aichel infusing a Baroque Gothic style into the completely rebuilt upper chapel.

In 1783, the Holy Roman Emperor, Joseph II,  abolished the Sedlec Monastery. The Schwarzenberg family of Orlikthen bought the property and paid for the continued maintenance of the Sedlec Ossuary. In 1870, the Schwarzenberg family hired FrantišekRint, a woodcarver from Česká Skalice, to rearrange and redecorate the bones in the lower chapel. The great Chandelier of Bones, as well as the Coat of Arms, are both his handiworks. He signed his name on one of the bones and this bone can now be seen by visitors near the chapel’s entrance. No other information about him is available in any historical records. 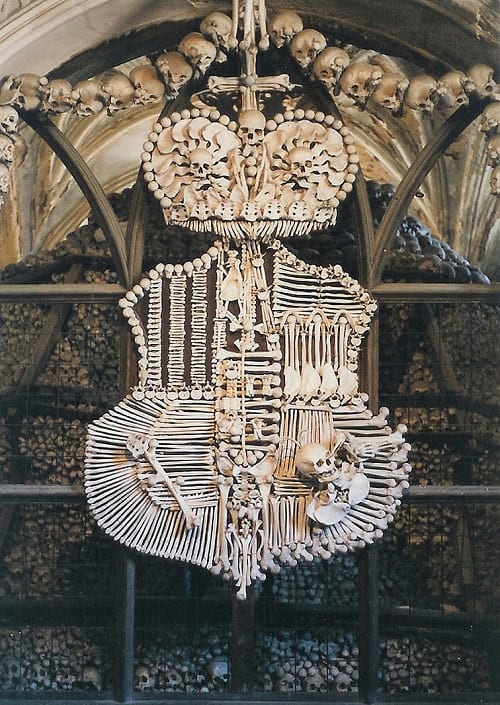 Kutná Hora is some 70 km from the Czech Republic’s capital Prague and about an hour away by train. It is a very small town now, but, in the medieval times, when it had working silver mines, it was well-populated and was considered the region’s second largest city.

From the train station, on your arrival from Prague, you can take a local train to Sedlec. You can also go by local bus, tourist bus, minivan, or taxi. If you walk from Kutná Hora town center, it takes about 45 minutes to reach Sedlec. Given the ready availability of local transport, however, you won’t need to walk all the way unless you absolutely need to. 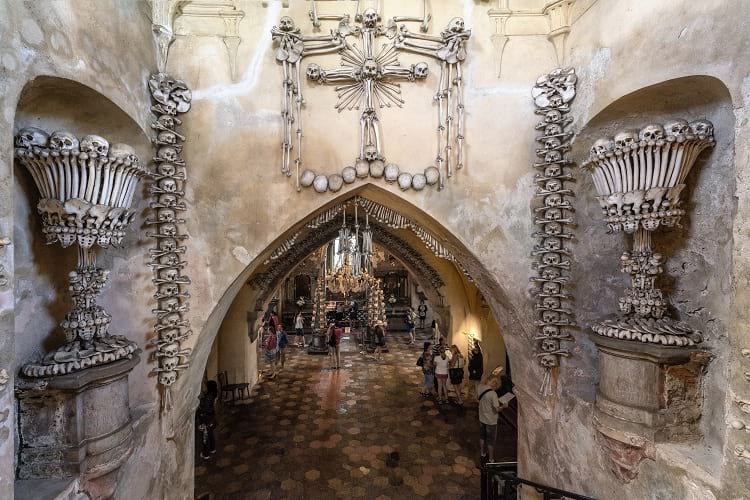 The Sedlec Ossuary charges a small entry fee and has different opening hours throughout the year. You can visit between 8 a.m. to 6 p.m. from April to September and from 9 a.m. to 5 p.m. October through March. In winter, from November to February, visiting hours are 9 a.m. to 4 p.m. During Christmas, the Sedlec Ossuary remains closed for visitors.

If you want to take back a souvenir of your visit, the gift shop sells several interesting bone-related items, including a plaster human skull.

Previous Article
Maharajas’ Express: An Ultra-Luxury Indian Train That Redefines the Experience of Travelling
Next Article
The Hum: The Mystery Behind a Humming Noise that Can Be Heard Worldwide