Church of the Dead: Home to the Peculiar Mummies of Provincial Italy The mummies of the Church of the Dead in Urbania, Italy. (Nalcos980 / Wikimedia Commons)

Urbania, a lively little Italian town, houses one of the most fascinating churches in the world- the Chiesa dei Morti, or Church of the Dead.  It looks to be a small nondescript medieval structure from outside. Stepping through the Baroque doorways and entering the chapel, however, reveals another story. Known as the Cemetery of Mummies, the chapel houses a display of eighteen naturally-mummified bodies dating back 400 years. The church is open for visitors to pay their respects at the altar. They can then take a tour of this macabre yet captivating monument.

Church of the Dead: Origin and history 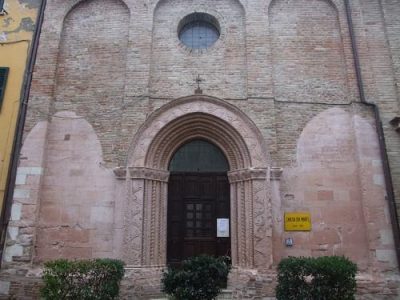 The church from outside. (Diego Baglieri / Wikimedia Commons)

The town of Urbania, then known as Casteldurante, saw the founding of the Brotherhood of the Good Death, or Confraternita della Buona Morte. The noble purpose of this Brotherhood, established in 1567, was to provide an honourable burial to the poor. They provided every service that might be required- ferrying corpses, assisting the dying, paperwork and formalities, giving out alms to the moribund, and so on. The actual burials were conducted in a designated plot behind the church, then known as Cappella Cola.

The Edict of Saint-Cloud, issued by Napoleon Bonaparte in 1804, mandated that all cemeteries be housed outside the town limits due to health concerns. As the cemetery behind the church was being dug up, 18 bodies, all naturally mummified, were recovered intact from the grounds. A hundred skulls were also recovered while exhuming the bodies- though not mummified, but slightly mouldy. These 18 remarkable mummified corpses and the 100 skulls have been on display in a crypt behind the altar since 1833. The church has since been known as the Church of the Dead.

The science behind the phenomenon

The mummies housed within the Church of the Dead are remarkably well-preserved, as can be seen behind the glass displays. Not only are their skeletons intact, but also their skin and internal organs. In some exceptional cases even clothing, hair and genitals are prominently visible behind the display. 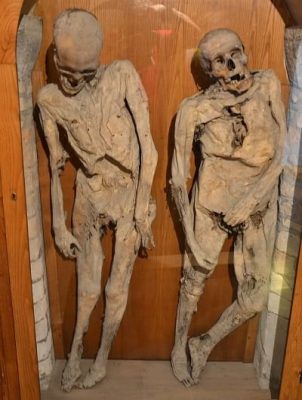 In the 1960s and 70s, anthropologists and biologists finally came to an explanation for this baffling natural phenomenon. Their experiments showed the presence of a special kind of mould in the soil that dried up the corpses. The combination of climatic conditions and these moulds led to all the fluids within the body to be sucked out. The structure remained preserved – thus mummifying the corpse. All the eighteen mummies have similar levels of preservation, and the same red tinge from the clay they were buried in. It is interesting to note, however, that the skulls housed within the same cemetery were not mummified. This is possibly due to the mould not growing adequately or uniformly on them.

This peculiar phenomenon is not exclusive to Urbania. Studies have shown that the region near the towns of Ferentillo and Venzone (both in Italy), also exhibit this phenomenon.

The dead and the tales they tell

The eighteen mummies all stand behind individual glass displays in the crypt, each with their unique and tragic stories to tell. Since the Brotherhood of the Good Death served the dying destitute, these mummies mostly belonged to social outcasts. They were sick and poor people and often died violent deaths. Marks of violence are still evident on their mummified bodies, revealing their causes of death and making each corpse distinct.

One of the mummies, for instance, belongs to a mother who died at childbirth. Her ventral was torn open in the clearly visible shape of a cross. The mummy of a young man, possibly stabbed in a vigil, sports holes where the blade had penetrated him. This particular mummy’s heart is displayed separately, showing the knife wound through it. In displays close by one can find the body of a man hanged to death, and another buried alive. One of the mummies sports signs of Down’s syndrome, while another died from heart failure.

These corpses had all been buried between the 14th and 19th centuries. One of the mummies is said to belong to an 18th century town-baker named Lunano. Another, to a 17th century writer and historian named Sebastiano Macci. A mummy on display even seems to have Mongoloid features. The central position of honour is taken by the mummy of Vincenzo Piccini (Prior of the Brotherhood of Good Death). He can be seen dressed in a white-and-black funeral garb. The mummies of his wife and son are also displayed near him.

Visitors are assigned tour guides who can run them through the stories of each of these eighteen mummies. Renowned for its unique displays, this peculiar but extraordinary monument has been the subject of many a documentary and press feature. All this attention from media has definitely boosted tourism in this small town, also famous for its ceramics and majolica. However, one cannot help but feel as though trespassing on a sacred and secret haven, when inside the church. The desolate Church of the Dead has housed these eighteen mummies and a hundred skulls within its chapel walls for centuries now. They have stood the test of time, privy to endless secrets and tales, waiting to tell those who stop by to pay their respects.

Enjoyed this article? Also, check out “Rosalia Lombardo: The 8,000 Skeletons, 1,252 Mummies and a Fallen Angel Who Rest Within the Catacombs of Capuchin“.

Previous Article
Sarcastic Fringehead: Most Quarrelsome Fish That Has a Big Mouth
Next Article
Pamukkale: The Cotton Castle in a Mess of Limestone and Healing Waters