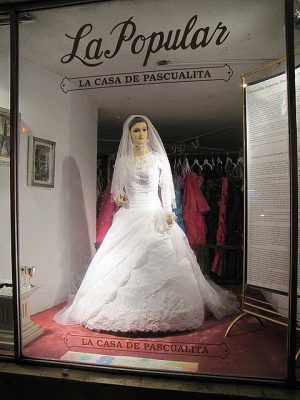 La Pascualita as displayed in the store. (Joeysodi / Wikimedia Commons)

In late 1920s Mexico, a couple gifted their daughter with what seemed like an ordinary doll at the time. Like every other child, she too outgrew her dolls and abandoned them. However, a decade later the family noticed something strange while cleaning out their attic. They believed that the doll looked somewhat different, as though it had aged. On closer inspection, they noticed that wrinkled had formed on the doll’s forehead and the fingers looked like they had developed nails. According to doll collectors, this may have occurred due to moisture and fluid degradation.

According to the family, the doll was said to have “lived” a life of its own and aged like a real person while it was in the attic. While this terrified them, they also saw this as an opportunity to earn money by selling the doll that was clearly rare. They sold the doll to a clothier, who added many intricate details to the doll and transformed it into a mannequin. While many believed that it was simply a rare and extraordinary doll, some also speculated that it may have been a body that had been embalmed in order to preserve it. The process of mummification was not new and had been practised before this as well. For a doll or a mannequin, it looked very human and realistic. It was this very feature that made the news of  La Pascualita spread all over.

In the year 1930, news about a life-like mannequin spread like wildfire in the city of Chihuahua. It was impossible for the locals to not notice the impossibly life-like appearance of the mannequin. To add to the eeriness, people soon took notice of the close resemblance it bore to the daughter of the shop owner, Pascuala Esparza. 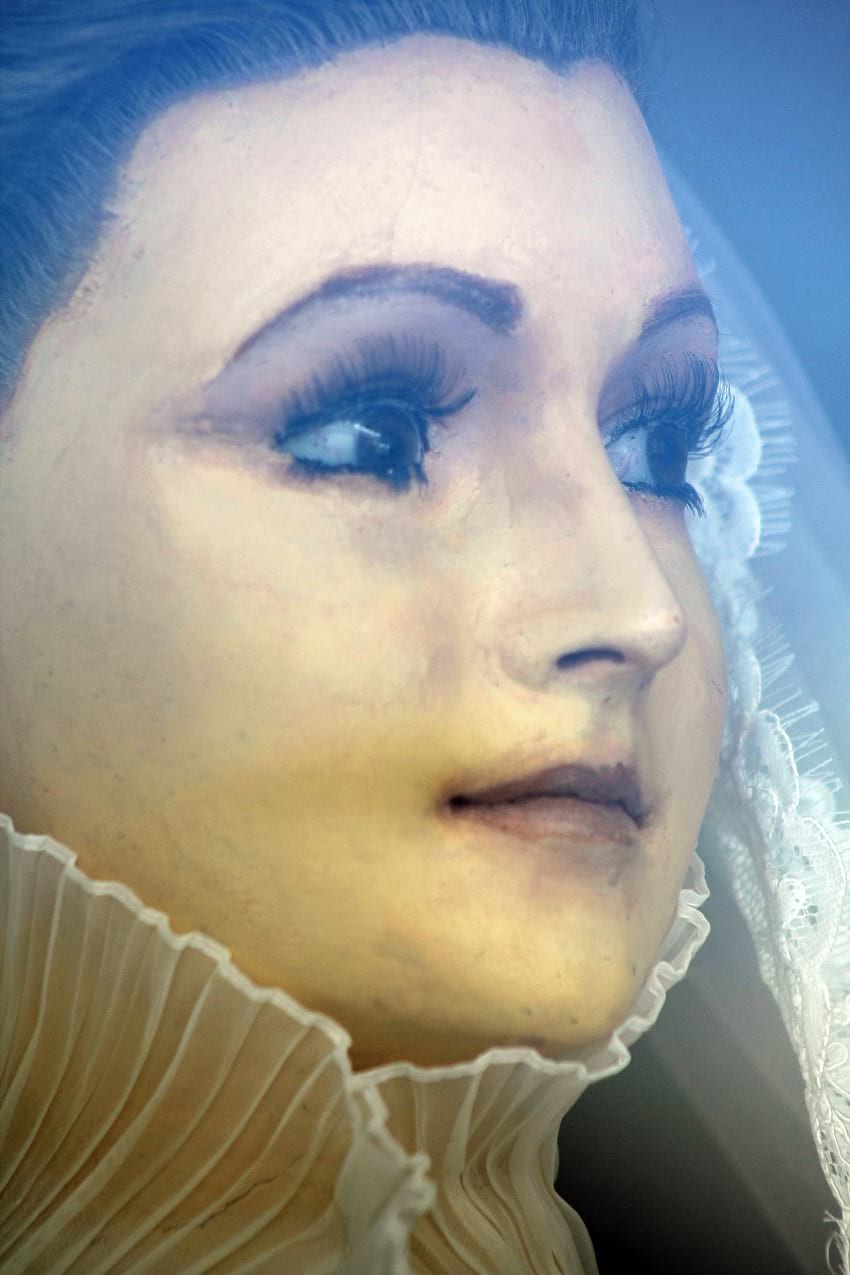 Close up photo of La Pascualita’s face. (© Kiara Ramirez / Used with permission / Photo has been enhanced)

An urban legend formed around the daughter who died due to the sting of a black spider on her wedding night. Locals claimed that the father turned her body into a mannequin through an embalming fluid, not having the heart to part with their beautiful daughter. The rumours turned into a much more bizarre and supernatural tale, as stories about the mannequin’s eyes ‘following them’ started spreading. Even the employees at the bridal boutique have a hard time dealing with the eerily life-like mannequin’s presence around them. One employee went on record saying:

“Every time I go near Pascualita my hands break out in a sweat. Her hands are very realistic and she even has varicose veins on her legs. I believe she’s a real person.” 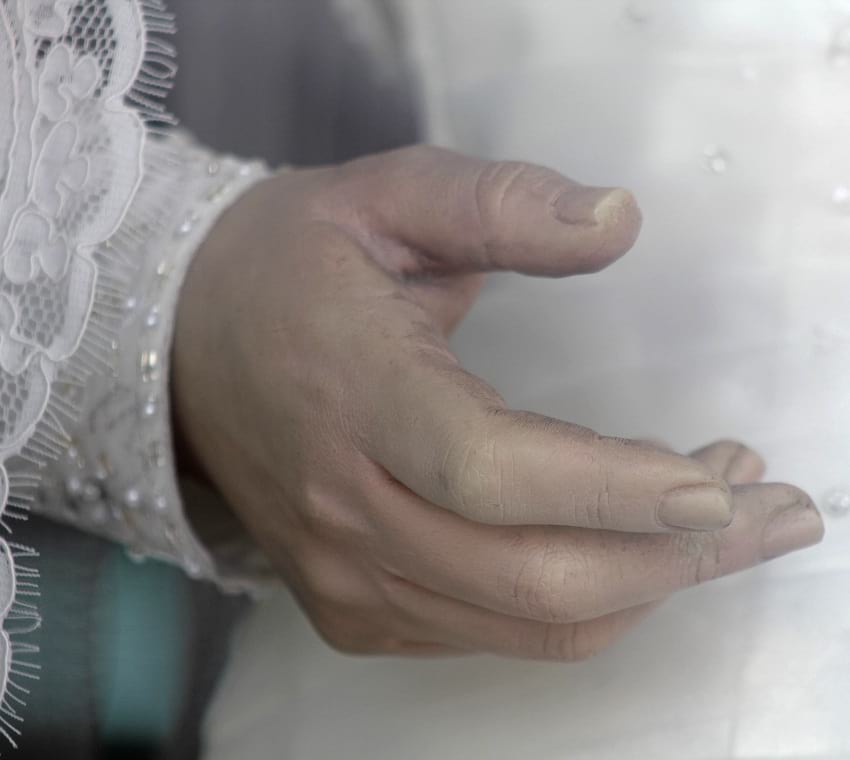 Close up photo of La Pascualita’s hand. (© Kiara Ramirez / Used with permission / Photo has been enhanced)

There are a host of other stories and incidents around the mannequin. Word got around that a French magician was so enamoured by La Pascualita’s beauty, he would sneak into the store every night. He apparently brought her back to life, danced with her around the town all through the night, and would return her to her dormant state by morning.

When asked about the multitude of urban legends and horror stories revolving the mannequin, the shopkeeper simply winked and said: “Is it true? I really couldn’t say.”

Myth-busting: Corpse preservation and its logistics

On 21st January 1924, Soviet leader Vladimir Ilyich Lenin died due to complications from a gunshot wound. The original plan was to bury the body, and it was only temporarily embalmed to prevent decomposition until a formal funeral could be arranged. After a four-day-long funeral, during which tens of thousands of mourners would brave freezing temperatures in order to honour his memory, Lenin was to be buried. Four days, however, proved to be insufficient for the massive influx of mourners. After 56 days of indecisiveness, the officials determined to preserve the body permanently.

Today the body of Lenin is preserved by a team known as the ‘Lenin Lab’ that offers its services to various wealthy men and government officials. The process involves removing organs, using fluid to maintain shape, and replacing skin from time to time, all the while keeping the temperatures cool. The only things left of Lenin’s body are his skeleton, muscles, skin, and some connective tissues  After a century of preservation, with extreme care and caution, there are still reports of the corpse having his skin leaf off, the left ear being non-existent, and the body having this ‘damp, ghoulish, subterranean stench’. The costs to maintain a body this long: a whopping $197,000 (estimated in 2016).

It requires a lot of time, labour, money and dedication for meticulously preserving bodies after death. Perhaps this is why the notion that a corpse in some Mexico city, with temperatures soaring over 35 degrees, showing no sign of degradation in over 8 decades, sounds highly unlikely. Hence it is only natural to discard the theory of La Pascualita being a ‘mummy’.

The dismissal of the theory that La Pascualita is a preserved corpse does not necessarily diminish the intrigue around the mannequin. La Pascualita is still a well developed, well-crafted piece of art, with detailed skin texture and vein topography. The eyes of the doll are so realistically made, that it speaks volumes of the craftsmanship. The doll’s eyes look eerily human, giving one an uncomfortable feeling as though the doll is constantly staring at them from under its thick glossy lashes.

The unusual human-like appearance of La Pascualita, without the use of wax, is a phenomenal achievement in itself. The biggest tragedy to the story, however, remains that we do not know who originally made this doll. Even the family who donated the doll to the boutique where it remains in exhibition today remains anonymous and thus cannot help trace back to the creator of La Pascualita.

Enjoyed this article? Also, check out “The Count of Morbid Love: Carl Tanzler and the Dead Maria Elena“.

Previous Article
Clever Hans: The Einstein Horse That Could do Math
Next Article
Laszlo Polgar – The Hungarian Psychologist and Educator Who Raised Three Chess Prodigies