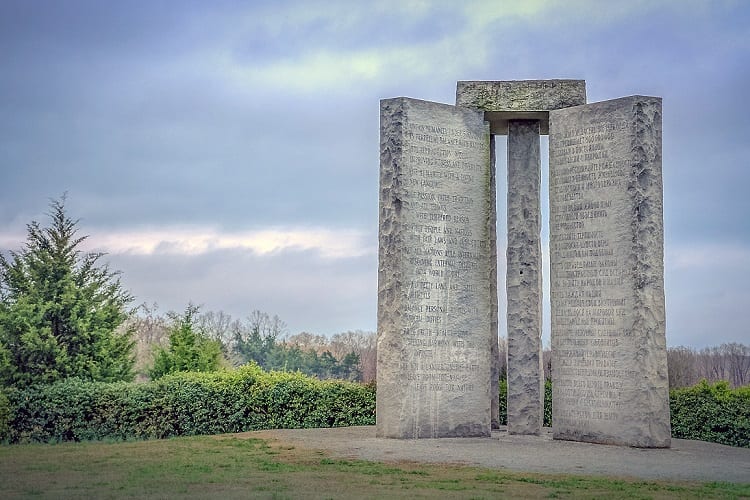 Georgia Guidestones is a monument made of granite, and they lie in a land site situated in Georgia, USA. Built in 1980, it is approximately 19’ 3” tall. It is also generally dubbed as the ‘American Stonehenge’. The arrangement of the Guidestones is such that they could function as a compass, calendar, and clock in the event humanity had to be restarted from scratch. It would also explain why the structure is built so sturdily if it is meant to endure the end of the world. There is one slab in the centre with 4 more around it, and a capstone tablet lies on top of all the 5 slabs. Engraved on each of the 5 standing slabs, there are a set of messages that contain 10 guidelines in eight languages of the modern world.

The story of how the structure came to be is a little mystifying. In June of 1979, a man approached a granite memorial manufacturing company and ordered for the construction of the structure. The man, who was using a pseudonym, called himself Robert C. Christian and stated that he had come “on behalf of a small group of loyal Americans”. Wanting to remain anonymous even while making the payment, he explained that the group of Americans he was representing had been planning the structure for over 20 years. 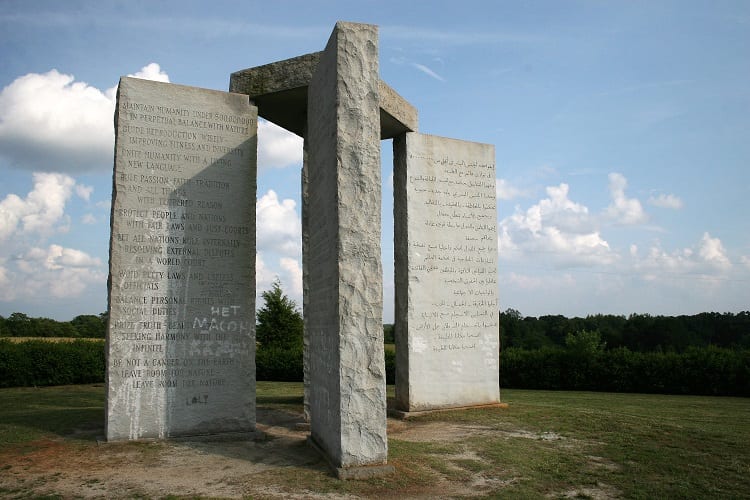 The 5 slabs have the same 10 guidelines written on it in 8 different languages; going clockwise around the structure the languages are English, Spanish, Swahili, Hindi, Hebrew, Arabic, Chinese, and Russian. The 10 guidelines are supposed to express a New Age ideology and they are as follows verbatim in English:

The only other thing that provides some clue to this mysterious structure is an additional tablet standing a little away from it that provides historical background and purpose of the structure. This tablet contains information directly related to the structure itself such as the size and weight of the tablets, the languages that are used, and the date of inauguration of the structure. It also contains a brief list of the astronomical features and the sponsors for the structure. The text on this capstone is also suggestive to the existence of a time capsule buried under it. A section specially reserved for filling out dates when the time capsule is buried and removed are not filled out. This might suggest that the capsule may not have been put in there, to begin with.

The structure is very interesting in that, not only does it provide guidelines for humanity to rebuild itself but it also provides astronomical precision to function as a clock, calendar, and compass. The structure is oriented to track the Sun’s progression from East to West throughout the year. The North Star is also visible to stargazers through a hole on one of the slabs. In order to indicate the day of the year, a slim beam of sunlight is focused on the centre slab at exactly 12 pm by drilling a hole through the capstone tablet. 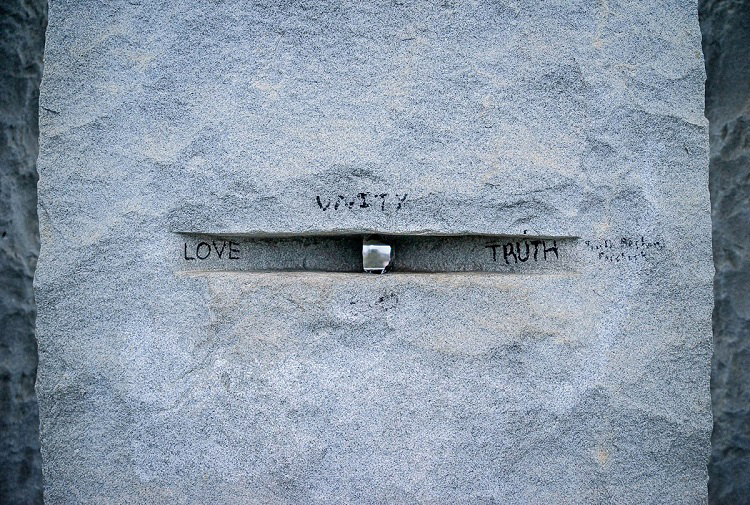 The hole in the Guidestone from where North Star is always visible. (Dina Eric / Flickr)

As baffling as these guidelines are, the only commonly agreed upon perception is that they describe how to rebuild human civilization in the event of complete devastation. This perception also agrees with the fact that the structure was meant to withhold any kind of devastation or natural disaster. Also given the structure’s astronomical precision, the perception of rebuilding a new human civilization is quite convincing.

The structure was vandalized in 2008 with spray paint and graffiti with slogans like “Death to the New World Order” and “I am Isis, Goddess of Love”. Since the vandalism was the first serious act against the structure, the maintenance department of the construction company called in the FBI to investigate. Supporters of the guidelines, such as followers of Yoko Ono, have called the guidelines a “stirring call to rational thinking”. On the other hand, some people have called them the Ten Commandments of the Antichrist and suggested that structure has a deep Satanic origin.

Fact Analysis:
STSTW Media strives to deliver accurate information through careful research. However, things can go wrong. If you find the above article inaccurate or biased, please let us know at feedback@ststworld.com.

Previous Article
The Extraordinary Case of Wang the Human Unicorn
Next Article
Pripyat, Ukraine: The Thriving Soviet Nuclear City That the Chernobyl Disaster Turned into a Ghost Town Overnight