The Tjentiste War Memorial: A Commemoration of Those That Died in the Battle of Sutjeska 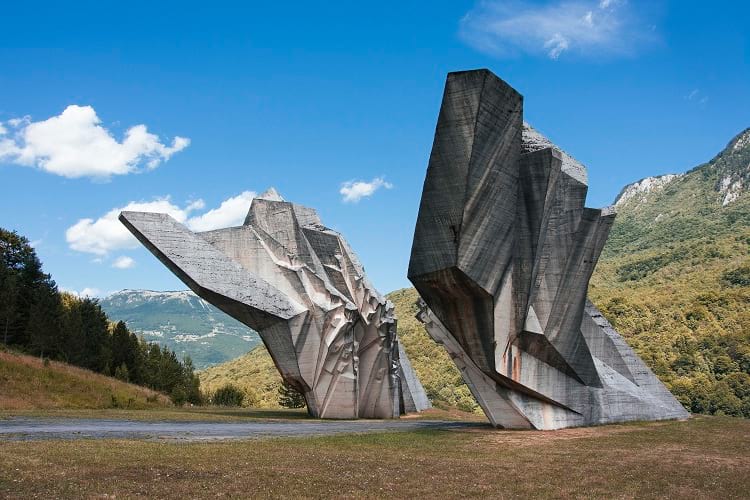 If you visit the Sutjeska National Park in Bosnia and Herzegovina, you will come across a strange pair of craggy structure called Tjentiste War Memorial. While these structures meld in well with the surrounding mountainous landscape, they are clearly not organic to it. These manmade concrete sculptures were put in place on the mountainside in the 1970s to commemorate the Yugoslav fighters that died there during the Second World War.

In the 1960s, 1970s, and 1980s, the socialist government of the former Yugoslavia built a number of war memorials to honour their citizens that had died fighting the German army. The Western media referred to these memorials as spomeniks. The Tjentište war memorial is one of the better known and most recognizable spomeniks.

It is located in the Valley of Heroes in the Sutjeska National Park, which is one of the oldest National Parks in Bosnia and Herzegovina. The Park gets its name from the river Sutjeska which runs through it.

The memorial consists of two huge abstract walls of white-grayish concrete that, from one angle, look like a pair of hands—or a pair of symmetrical wings—opening up towards the sky. You can walk along the path between the sculptures and emerge out to a grassy plateau. Here, there are stone tablets that are engraved with the names of the partisan units that took part in the Battle of Sutjeska in 1943.

The Yugoslav designer, Miodrag Živković, came up with the design concept for the Tjentiste war memorial. The gigantic monument—which stands 19 metres high and is 25 metres wide— is supposed to be an abstract representation of the push the beleaguered Yugoslav partisans made to escape through the surrounding Axis forces.

Although mechanical options were available in the 1970s, Miodrag Živković chose to create the Tjentište war memorial almost entirely by hand. While it was being constructed, he received much support and encouragement from President Josip Broz Tito. As the latter had been personally involved in the Battle of Sutjeska and had seen many of his comrades die in the onslaught, he took a great interest in every aspect of the development of their memorial monument. 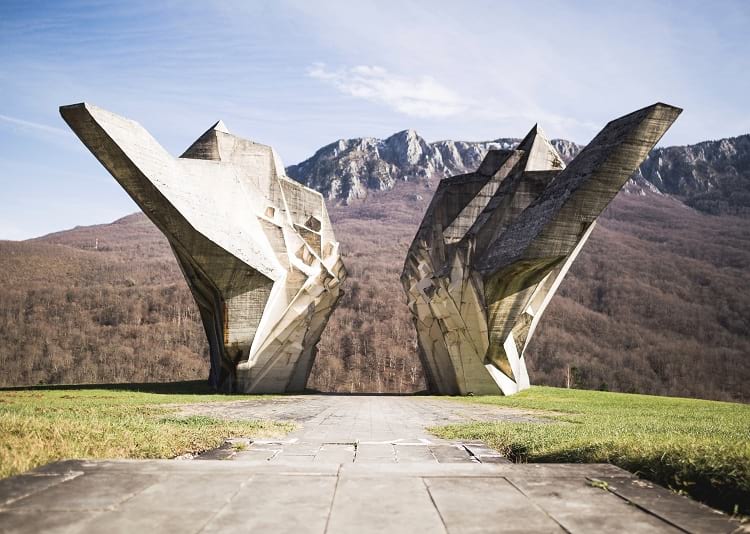 If monetary issues hadn’t thrown a roadblock in the construction, it is possible that the monument would have been even larger than it is at present. Apparently, Miodrag Živković’s original design comprised of a monument that spanned the entire Heroes Valley.

The Tjentište war memorial was officially unveiled on 5 September 1971. At the time, it was only partially completed.

The vandalization of the Tjentiste War Memorial

While the monument we see in the present time is quite impressive, it was even grander when it was first built. There was a stone altar, a memorial house with frescoes, a museum containing the battle memorabilia, sculptures, and other exhibits, a pavilion, and a hotel. However, during the Bosnian War, the Bosnian Serb Army vandalized the memorial complex and destroyed everything except the large concrete monument. They might have destroyed that as well except they ran out of explosives to blow it up.

What the Tjentiste War Memorial commemorates

The Yugoslavian government built the Tjentište war memorial in remembrance of the partisans that died during Operation Fall Schwarz or Case Black, also known as the Battle of the Sutjeska and the Fifth Enemy Offensive. At this time, a huge Axis force made up of 1,27,000 soldiers and 300 aeroplanes, surrounded 18,000 partisans of the People’s Liberation Army near the Sutjeska river in south-eastern Bosnia. The plan was to wipe out the partisans completely. The Axis forces had been ordered to leave no stones unturned, to spare no one, and to let nothing get in the way of that plan.

The Yugoslavian partisans, however, put up a fierce fight and, despite their overwhelming force, the Axis armies failed to wipe them out.

Most of the partisans managed to escape and that helped turn the tide of the battle against Germany. In the process, though, over 7000 nurses, workers, officials, and other civilians lost their lives in the battle.

The Battle of Sutjeska

Not only were the partisans outmatched, but they also had other troubles to contend with. They were beset with typhoid and other medical issues. Furthermore, they were half-starved and were running out of both food and medical supplies.

They had no hope of winning the battle and it is a miracle that they even managed to escape.

Up to the battle of Sutjeska, the Allied governments had supported the Chetniks. That is, the Serbian soldiers that were loyal to the deposed Yugoslavian ruler. However, after seeing how the communists succeeded in evading and escaping from the Axis forces, the Allies switched over to supporting them instead. The surviving communists of the People’s Liberation Army regrouped to continue fighting against the Axis armies. As they now received aid from the Allies, their counteroffensives were now increasingly successful, and they helped put the Axis powers on the back foot. Later, in 1945, they renamed themselves as the Yugoslav People’s Army and carried out brutal reprisals against their fellow citizens.

Now all that remains of the famous battle of Sutjeska are fading memories and the magnificent Tjentište war memorial. It tells us about the people that died there, and its vandalism speaks of the many more that died during the Yugoslavian civil war in the 1990s.

Previous Article
Convair NB-36H: The only American Aircraft to Carry an Operational Nuclear Reactor
Next Article
Akodessawa Fetish Market: The Creepiest Voodoo Market in the World