The Extraordinary Case of Wang the Human Unicorn 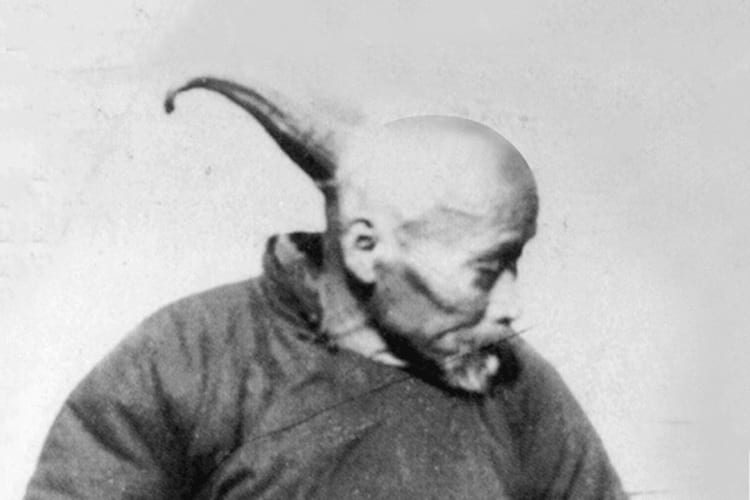 The earliest case of a horned human on record is of Wang, a Chinese man. He had a 13-inch horn on the back of his head. A Russian banker who spotted him in 1930 sent a photograph of him to Robert Ripley (1890-1949), the creator of ‘Ripley’s Believe it or Not’. Ripley tried to meet Wang and even announced a reward for anyone who could arrange their meeting, but failed. However, Wang’s status was confirmed by other unicorns (mythical one-horned animal, used here as an allusion to horned humans) whom Ripley met in his travels. In the course of his research, he found many other Unicorns. A French woman, Madame Dimanche had a 9.8-inch horn on her forehead and another tiny growth at the wrist. Ripley also wrote about a 16th Century man named Francis Trovillou, called Horned Man of Mezieres. Madam Dimanche had her 10-inch horn removed surgically.

Liang Xiuzhen, an 87-year-old Chinese is another such case reported as recently as 2015. She had a five-inch horn growing on top of her head. For 8 years, it persisted as a black mole which gave way to horn formation in 2013. The horn soon fell off and was replaced by another faster-growing horn. The new growth was made entirely of keratin (material which makes up the outer layer of human skin and hair). Doctors feared to remove it thinking it was a cancerous growth. In 2010, a Chinese grandmother Zhang Ruifang, 101-years-old, had 2 horns sprouting from her forehead. One was two and a half inch while other just a speck. She was happy having them and refused to have them surgically removed. 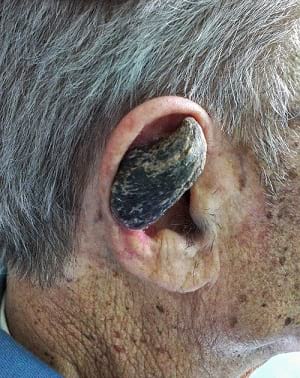 A horn protruding from the ear lobe in an elderly person. (Jojo / Wikimedia Commons)

Composed largely of keratin, horns in humans are called cutaneous or skin outgrowths, and not without any reason. Keratin is the same substance which constitutes the hair and nails and is produced by specialized cells present in the outer layer of skin. These outgrowths are generally harmless, but in 20% of cases, these become cancerous. Horn formation may be triggered by exposure to radiation from sunlight, Human Papilloma Virus (HPV) or scars resulting from freak/unhealed injury. A case of genetic predisposition is also reported, in which both father and son were unicorns. Surgical removal is the only viable treatment. But some horns, especially the malignant types, regrow.

According to the ‘Book of Wonderful Characters: Memoirs and Anecdotes of Remarkable and Eccentric Persons in All Ages and Countries’, by Henry Wilson and James Caulfield describes a man named Trovillou having a horn as large as a sheep’s. ‘Anomalies and Curiosities of Medicine’ by George Goud, MD., and Walter Pyle, MD., mentions a peculiar case of Paul Rodrigues, a Mexican porter. The horn on his head was 14 inches in circumference and divided into 3 shafts.

The human horns are not just confined to head the region. Even sexual organ, the penis, is reported to host horn growths. One man had a history of circumcision gone awry. The skin flap ended up showing a small marble sized horn.

Before 1900 A.D., there were more than a hundred documented cases of the horned human being. This condition occurred more commonly in elderly females. Thanks to the medical interventions, very few cases of horned humans have been recorded in the past hundred years. But occasional cases keep coming up for the simple reason that human skin does have the potential to grow into a horn-like structure.

Recommended Read:
1. Book of Wonderful Characters: Memoirs and Anecdotes of Remarkable and Eccentric Persons in All Ages and Countries |  by Henry Wilson and James Caulfield
2. Anomalies and Curiosities of Medicine | by George Goud, MD., and Walter Pyle, MD