‘Ape Woman’ Julia Pastrana: The Sad and Short Life of the Ugliest Woman in the World Mexico of the 1800s appears to have been the land of freak human beings. There were reports of a two-headed Mexican named Pasqual Pinon working as a railroad worker in Texas, USA. Earlier, during the same century, there were also reports of the existence of the ugliest woman in the world. She was none other than the bearded ‘Ape woman’ Julia Pastrana.

The 4ft 5in tall Julia Pastrana, born in 1834, was not famous for her 112-pound weight. She was fascinating to people the world over as her whole body was covered with hair, except for her palms and the soles of her feet.

Medical experts feel this could be 1 in a million congenital abnormalities or a freak of nature. The abnormality is called acromegaloid hypertrichosis syndrome, a genetically rare syndrome. Due to this, she had abnormally thick lips in addition to a large jaw, a prominent brow having thick, arched eyebrows. ‘Ape woman’ Julia Pastrana’s teeth were irregular and the nose was strangely large.

It is 159 years since Julia Pastrana was born in the mountains of Western Mexico. At the time of her birth in 1834, Julia’s ugliness is said to have convinced her mother that this was due to a supernatural force. Even some local tribe people blamed the deformity on werewolves.

Right from her childhood, Julia was a local celebrity due to her ape-like appearance. For a major portion of her childhood, she spent time in an orphanage. Thereafter, a local state governor is said to have adopted her. Until she turned 20, the governor used her as an in-house maid and entertainer. Later,  during her 20s Julia had a chance encounter with an American showman called M. Rates. The showman convinced her and made her perform on stage. Thus began her career in circuses and freak shows across the United States of America and Europe. 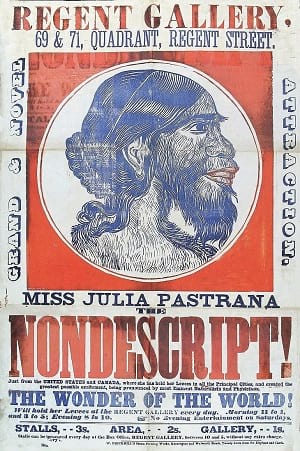 Julia’s debut performance was in 1854 at the Gothic Hall in New York City. She became a successful performer and was since then, often billed as “the Ape Woman” or even the “Baboon Lady”.

While Julia Pastrana was busy taking part in freak shows, physician-surgeon Alexander Brown Mott of New York city is said to have established the idea that she was a semi-human being.

After examining Julia, Alexander is said to have declared that she was a hybrid of an orangutan and a human being. Julia’s publicity agents are said to have latched on to this concept and used it in promotional material.

Contrary to her public image, Julia was a gentle, highly intelligent and kind-hearted woman. She spoke three languages, including English and Spanish. She taught herself to dance and sing. She loved to cook, sew and travel.

Before she travelled to Europe, Julia secretly married Theodor Lent, her manager. Julia married him for love, but Theodor is believed to have married her for gain.

During her Leipzig, Germany, stage play in 1857, the German audience rejected her saying the show was in bad taste. Even local police had to intervene to stop the show.

At the age of 36 in January of 1860, Julia gave birth to a baby boy in Moscow. Sadly though, the boy died after two days. Three days later, Julia died. Julia Pastrana’s last words on her deathbed were “I am dying happy”.

Julia tragic saga continued even after her death. Her wily husband immediately sold the bodies of his wife and child to anatomy professor Sokolov of the Moscow University for a price. But, when the professor embalmed the two bodies and displayed them in public, Theodor bought back the bodies.

For the next six years, Theodor displayed the bodies in glass cabinets and took them on a world tour to profit from them. Sadly, death failed to free Julia and people continued to gawk at her and her son.

During the subsequent decades, people and even government profited from the mummified bodies. Eventually, they went into cold storage in Norway only to resurface in 2013. The bodies were returned to Mexico only to be laid to rest in Sinaloa. Finally, the ape woman is free from prying eyes.

Later in 1998, writer Shaun Prendergast wrote another play based on Julia’s life. It was titled ‘The True History of the Tragic Life and Triumphant Death of Julia Pastrana, the Ugliest Woman in the World.

In 2003, a Texas production house headed by Kathleen Anderson Culebro staged a play on Julia.

In 1964, Marco Ferreri produced a film titled ‘The Ape Woman’ on the life and times of Julia. Later in 2013, director Celso García had announced that he would be making a movie titled “Velvet” on the life of ‘Ape woman’ Julia Pastrana. Celso García and Francisco Payó González prepared the screenplay for the movie.

Previous Article
Important New Discovery May Provide Insights into the Construction of the Pyramid of Giza
Next Article
Hochosterwitz Castle: The Medieval Castle in Austria That Remained Impregnable from Enemy Attacks