The Catacombs of Paris: A City of the Dead Under the City of Love Back in the 17th century, at a time when Paris blossomed into the European hub, the city of love faced a dire issue – there were not enough graves for the dead. Graveyards overflowed with overstuffed graves until corpses could hardly rest in peace.

Not only did it make for an unpleasant view, but it was a health hazard for the citizens who were yet to book their spots at a graveyard. So the Paris authorities decided to bury their dead a little below the usual six feet. Tombe-lssoire quarries, under the plain of Montrouge was the site they chose to reallocate these corpses.

At that time, the site was located outside the Capital. The quarries that lay underneath were a part of a labyrinth extending up to 800 hectares under the city. The quarries were in use until at least the 15th century before they were abandoned. It was only in 1785 that the quarries were used again for bone transfer. The preparation of the site was headed by Charles Axel Guillaumot, an Inspector of the General Quarry Inspection. The first cemetery to be evacuated was Saints-Innocents. From 1785 to 1787, bones were collected from tombs, graves and charnel houses and transferred to the quarry at night, as the Parisians slept oblivious to the act.

The bones were first dumped in two quarries and later distributed into piles by the quarry workers. The transfers began once again in 1814, right after the French Revolution. As the parochial cemeteries of Paris like the Saint-Eustache, Saint-Nicholas-des-Champs and the Bernardins Convent were suppressed, countless skeletons made their way to add to the remains of 6 million people in the quarries, 20 meters underground. Catacombs, as they are called in reference to the ancient Roman Catacombs, were operational yet again during the renovation by Louise-Phillipe in 1840 and then again during the Haussmannian reconfiguration of Paris during 1859. 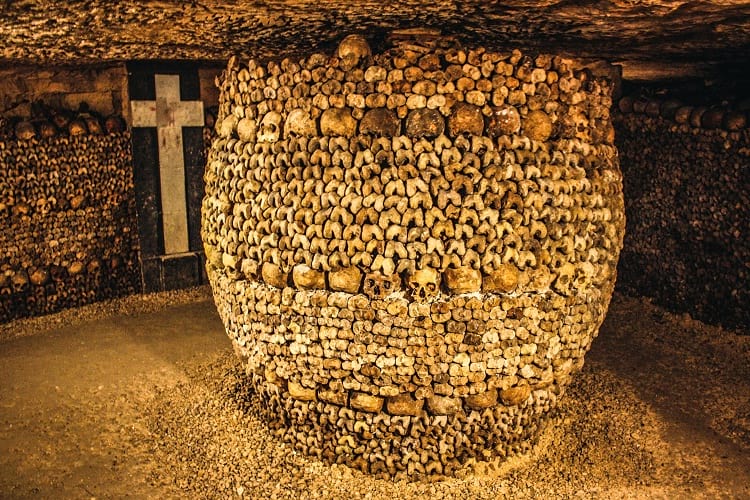 Inside the Catacombs of Paris

The Catacombs of Paris were made open to the public in 1809. The quarries saw a footfall of both French and foreign visitors who would leave their remarks of the state-initiated welfare of old human bones, aesthetically stacked along the walls of the quarries. Remarks and impressions could be written on a register placed at the end of the circuit. Soon, Catacomb visits became the favorite means of recreation for the French and foreigners. Its visitors included Napoleon Bonaparte who descended the Catacombs with his son in 1814. Back in the 19th century, the visiting arrangements were irregular. Today, it’s open to everyone and it sees a footfall of about 550,000 yearly.

The Catacombs are now a destination for a retreat for families. One of the world largest homestay holiday companies, Airbnb came up with a one of a kind Halloween offer that offered a night at the Catacombs for couples and families wIho wouldn’t mind sharing their bedroom with 6 million dead Parisians. A perfect package including a private concert, dinner, breakfast, and a storyteller who would tell fascinating tales of the Catacombs before bedtime. The offer came for the first time in 2015 with a strict warning – “Respect the Catacombs as you would your own grave.” 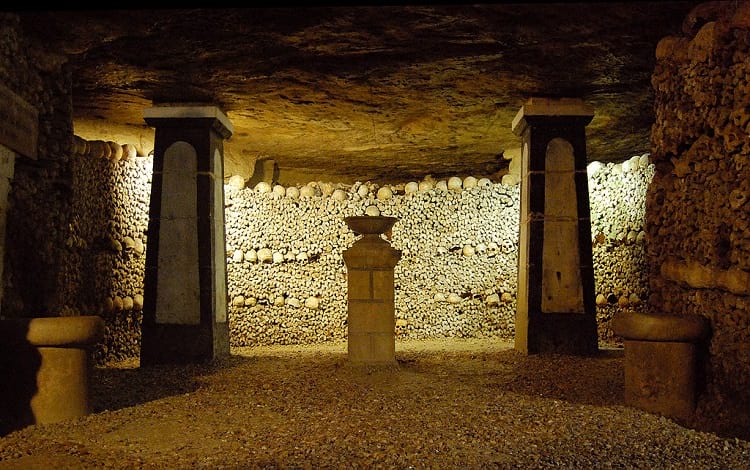 Today, only a part of the 200-mile-long maze is accessible to the public. But that doesn’t stop people from sneaking into parts of the galleries restricted since 1955. Notorious among the illegal explorers are school children and partygoers who are believed to have found secret passages through the maze. The quarries fascinate the young Cataphiles, as they’re known, who want to see more than what the government would let them. Some even are reported to have film screenings inside the Catacombs of Paris.

Quite often, curious teenagers are lost in the maze and a search party is needed to rescue them. On June 14, 2017, two teenagers, aged 16 and 17, were found by a search party with rescue dogs from the quarry. They were later taken to a hospital to be treated for hypothermia. The tunnels are pitch black when artificial lights are out. If the flashlight battery runs out, and no search party comes looking, it won’t be long before a strangled explorer adds up to the number of remains in the quarries.

The cataphiles, however, are not the only people the authorities have to worry about. Since most of the Catacombs are left deserted, anti-social elements of society are making the best of it. Very recently, a bunch of ingenious thieves smuggled more than 300 bottles of vintage wine worth €250,000 through the underground network. An Alley inside the Catacombs. (Rijin / Wikimedia Commons)

Presently, an exhibition known as the “Skeleton Story” is being held at the Catacombs ossuary. It had started in 2017 and will continue until the end of 2019. The exhibition is organized in collaboration with the National Institute of Preventive Archeological Preventive Research (INRAP) and the DRAC of Ile-de-France. It presents the excavations carried down by INRAP at the former Hospital de la Trinite cemetery. The exhibition points out the links of the bones from the Catacombs to the ones excavated by INRAP. The study provides a better understanding of the 15th to 17th century Parisians. Their food habits, their age and sex, the diseases they suffered from, and the epidemics that affected them are some of the factors the exhibition addresses.

The dead don’t pay taxes, or do they?

In conclusion, back in the 17th century, the dead in Paris was too much of a burden for the authorities and general people. It is believed by many that the lack of money, resource and to some extent will, led to the reluctance for a proper burial for the dead. Come to think of it, the pre-revolution working class of Paris wasn’t really what you’d call well off. To spend money on proper burial rituals was inconvenient. The cemeteries didn’t put much effort to cover the bodies either considering the fact that the dead don’t pay taxes. However, years after their death, the dead of Paris are now a grand source of tax for the government thanks to the tourism they attract.

Previous Article
Devils Hole: The Only Wild Habitat in the World Where the Endangered Devils Hole Pupfish Are Found
Next Article
The Ryugyong Hotel of North Korea: The Tallest Unoccupied Building in the World