The Ryugyong Hotel of North Korea: The Tallest Unoccupied Building in the World 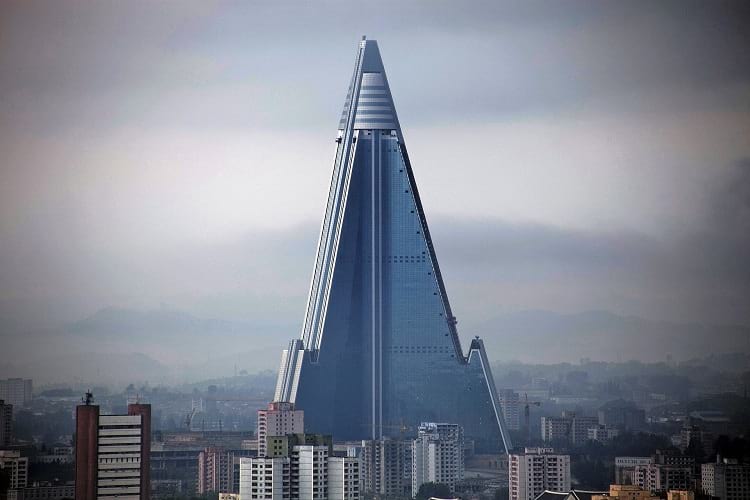 With 105 stories and a height of 1080 feet, the Ryugyong Hotel in Pyongyang in North Korea is the 63rd tallest edifice ever built as of 2019. At present, it also happens to be the world’s tallest, unoccupied building. This status may change with a shift in political winds and with an inflow of new foreign investment into North Korea. 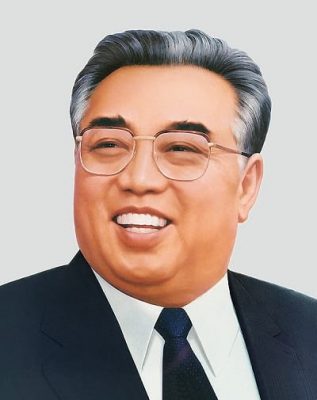 In 1987, on the instruction of the then President of North Korea, Kim Il-Sung, the North Koreans commenced building what was to be the tallest hotel in the world. The plan was to surpass the very tall Westin Stamford Hotel that the South Korean company SsangYong Group had built in Singapore in 1986.

The North Koreans also wanted to outshine the international limelight that would come South Korea’s way for hosting the 1988 Seoul Olympics. It would be a great worldwide sensation if they opened the Ryugyong Hotel with the commencement ceremonies of the 13th World Festival of Youth and Students that they were hosting in June 1989. Baikdoosan Architects & Engineers, a North Korean construction firm, come up with a unique pyramidical design for the new hotel and began construction work on it in 1987.

They built a three-winged building with all the wings converging together into a pinnacle. Each of these wings has a length of 330 feet, a width of 59 feet, and a sloping angle of 75 degrees. There are 3000 or 7665 rooms for guests. At the top of the building, there is a short cone that has a width of 130 feet, eight revolving floors, and six stationery floors above these.

Until 2009, when Dubai’s Rose Tower raised its spire over its already 984 feet height and thereby surpassed the Ryugyong Hotel’s height, the latter had the distinction of being the world’s tallest hotel building.

If they had been able to finish the work on schedule, the Ryugyong Hotel would have become the world’s seventh highest building, surpassing the Westin Stamford Hotel’s 741 feet; the latter, at the time, was the highest hotel in the world.

With the dissolution of the USSR in the 1990s, North Korea lost its most important backer and funder. It was no longer financially sustainable for the country to continue the construction work at Ryugyong Hotel. They had already spent around two percent of the country’s GDP, an estimated $750 million, on the hotel and now they had simply run out of ready money for further work.

By the time the work stopped, the builders had finished constructing the full size of the building. The incomplete structure loomed against the sky as it was, without fixtures and fittings, for the next 16 years. The builders had left a construction crane at the very top of the structure and it rusted there, poignantly reminding everyone of “the totalitarian state’s thwarted ambition,” at least according to the UK’s propaganda arm, the BBC. Other Western mainstream media outlets took the lead in dubbing the unfinished building as “The Hotel of Doom,” “The Phantom Hotel,” and “The Worst Building in the World.”

In North Korea, where the government had commemorated the hotel by printing its image on their national stamps, the media took care to make no further mention of the hotel. Although the building remained prominent on the city skyline, the government directed that its presence be excised from the map of Pyongyang and from official photographs of the city.

According to some sources, the concrete used to build the hotel was of inferior quality and this means that the construction is unsound. There have also been rumours that the lift shafts are not correctly aligned.

Resuming the construction of Ryugyong Hotel

In April 2008, the Egyptian company, Orascom Group, stepped in to help with continuing the hotel’s construction. They added a telecommunications antenna and the glass cladding over the entire exterior of the building that gave it the current shiny appearance. 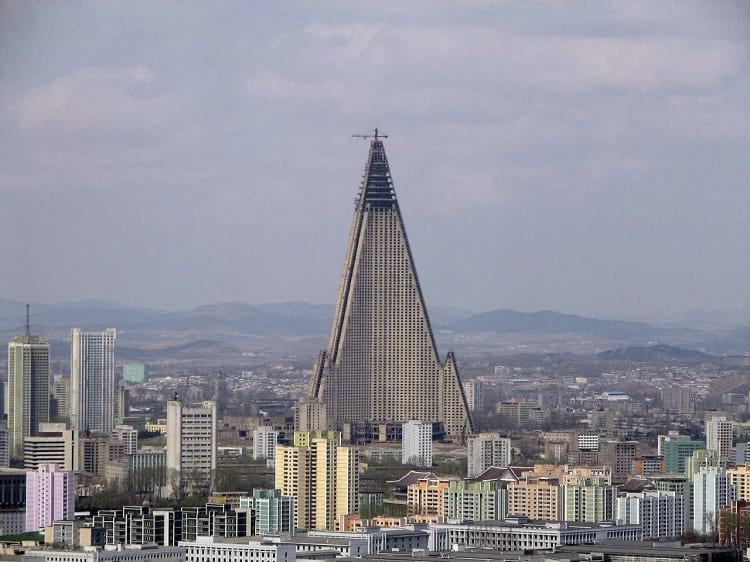 According to Khaled Bichara, the Chief Operating Officer of the Orascom Group, the Ryugyong is no longer to be only a hotel, but a building for mixed-use purposes. It will have restaurants, hotel accommodation, apartments, and business facilities. He also stated that the building did not have “too many problems” on the structural front, at least nothing that the Orascom Group couldn’t resolve.

By July 2011, the Orascom Group finished the hotel exterior. The following year, in September of 2012, Koryo Tours released photographs of the partially finished interior.

The Kempinski Hotels Group, in November 2012, announced their intention to run the hotel after its expectant opening in 2013. This opening plan fell through and the Kempinski Hotels Group backtracked on their earlier statement, saying they hadn’t signed a definitive agreement to run the hotel. It is possible that the ongoing hostility of the United States and other Western countries towards North Korea had something to do with in this backtracking decision.

Current status of the Ryugyong Hotel

After a hiatus of a couple of years, the Orascom Group resumed work on the Ryugyong Hotel in 2016 and are reportedly still working on it. They built access roads to the hotel in 2018 and added LED display features on the building exterior. The building now lights up every night with a light display featuring the North Korean flag and encouraging slogans.

In early 2019, the Ryugyong Hotel still stands vacant and retains its Guinness World Records title of being the tallest, unoccupied building in the world. This may change in the future, once the Orascom Group finishes their work.

Enjoyed this article? Also, check out “Varosha: The Abandoned Luxury Retreat in the Mediterranean“.

Previous Article
The Catacombs of Paris: A City of the Dead Under the City of Love
Next Article
2006 Mumbai Sweet Seawater Incident: When the Seawater had Miraculously Turned Sweet