Wood engraving of Captain Martin and Buren Anna Swan getting married. (Wellcome Library no. 2744i)

They say that love comes in all shapes and size. What about a couple whose combined height is about 15 feet and 8 inches tall? For us, even the idea of 8 feet tall ‘giant’ couple sounds completely weird and strange.

Martin Van Buren Bates, better known as the “Kentucky Giant’ was born on 9 November 1837 into a family of people with standard height living in Letcher County, Kentucky. At birth, Martin was an average sized infant. After he became six years old, he began a monumental growth spurt. By the time he was somewhere between twelve and thirteen years old, he was already over 1.82 meters (that’s 6 feet) tall and weighed approximately 136 kilograms. According to oral testimonies, he was a whopping 7 feet 11 inches tall. However, Guinness Book of World Records lists him two inches shorter. 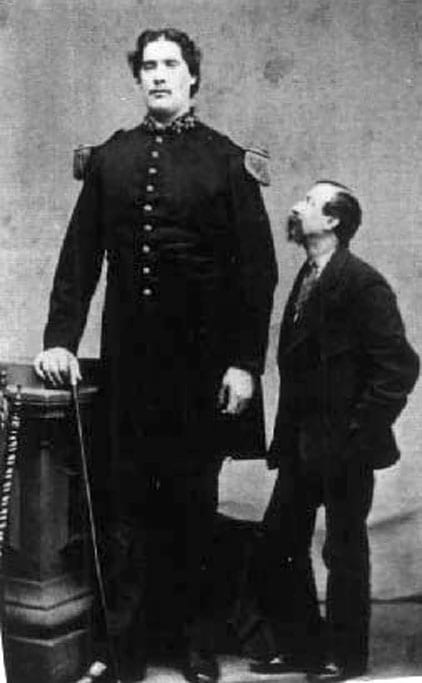 Martin started his professional career as a school teacher. But when the Civil War broke out, he joined the Confederate Army as a private. With his legendary figure, he rose to the post of Captain in a relatively short duration of time. The way he imposed his ‘boldness’ in battle made Union soldiers recite the tales of “Confederate giant who’s as big as five men and fights like fifty.” Surprisingly, he was once captured during the war but somehow managed to escape.

How did the giant couple meet?

After the war ended, he moved to Cincinnati and joined a Circus, making money by showing-off his enormous figure. While the circus was on a tour in Canada, a 7 feet 11 inches tall lady, Anna Haining Swan happened to visit the Circus. Impressed by the height of the lady, the promoter hired her immediately. The couple was meant to create a huge buzz as the ‘Giant Couple.’

Just like Martin, Anna too was born into a family of average sized people living in Nova Scotia. She had 12 siblings; all of them were average sized, except her. Anna was said to be a very bright kid. She was fond of literature and music and excelled at them. 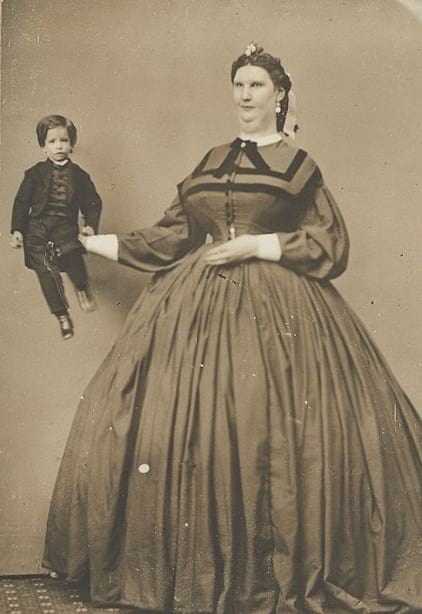 Martin and Anna started to work together. Soon, they got close and eventually fell in love with each other. The couple decided to get married while the Circus was on a ‘Europe Tour.’ Soon, they got married in London. Their marriage attracted a multitude of a crowd from across London. Queen Victoria herself gifted the couple ‘saucer-sized’ gold watches embedded with diamonds. Accounts also report that the Queen helped them with their booking at the St. Martin. After the glorious wedding, the couple moved to Seville, Ohio in 1872 to live a peaceful life. 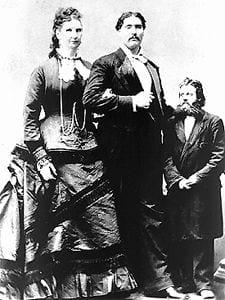 Anna gave birth to two children. Unfortunately, none of them survived more than a day. The first child was born in May 1874 and weighed 8.2 kg, traumatically stillborn. The couple was filled with grief and took a trip to Europe to recover from the trauma. After they returned, the couple bought a piece of land and built a ‘giant’ house adapted to their size.

To divert their minds, they did a few seasons with the W.W Cole Circus. These seasons with the circus during the period of 1877-1880 were very successful and helped the couple make a comeback to the limelight and help them regain their lost stardom.

In 1878, Anna was again pregnant. On the 19th of January, 1879, Anna gave birth to a boy. The labor had lasted for an exhausting 36 hours. The boy weighed 9.98 kg. Unfortunately, the boy lived only for 11 hours. Their ‘dead child’ broke the record of the heaviest child born.

This incident had a tremendous impact on Anna’s health. Anna died on 5th August 1888, just a day short of her 42nd birthday. Heart failure was reported to be the cause of Anna’s death. Martin paid tribute to her beloved wife by ordering a statue of her. The statue was imported from Europe and marks Anna’s grave till date.

Following Anna’s death, Martin sold his customized ‘giant’ house and moved to a town. After he recovered from the trauma of his wife’s death, he remarried to an average-sized woman in 1897. After that, he led a very unremarkable life until his death in 1919. Martin, Anna, and their children rest peacefully in Mound Hill Cemetery, Seville in Ohio.

Previous Article
What Would Happen if Solar Storm of 1859 Occurred Today?
Next Article
No Immunity from Loneliness – The Soul-Stirring Story of David Vetter “The Bubble Boy”