Devils Hole: The Only Wild Habitat in the World Where the Endangered Devils Hole Pupfish Are Found 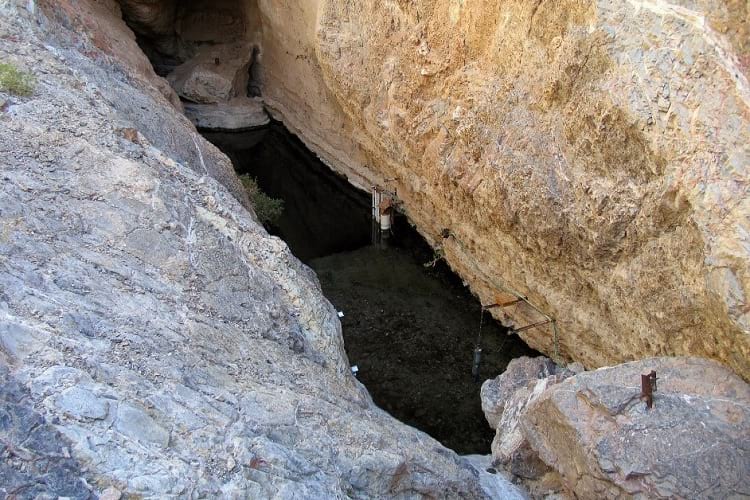 Devils Hole in Nye County, Nevada, is home to one of the most extraordinary species of fish known as the Devils Hole Pupfish or the Cyprinodondiabolis. Measuring about an inch to three inches in length, these fish exist only in this particular habitat in the wild. They are also the only fish found in the Devils Hole geothermal pool. At present, they are on the verge of extinction and the Nevada Department of Wildlife is taking strong measures to conserve their population and extend it by captive breeding. 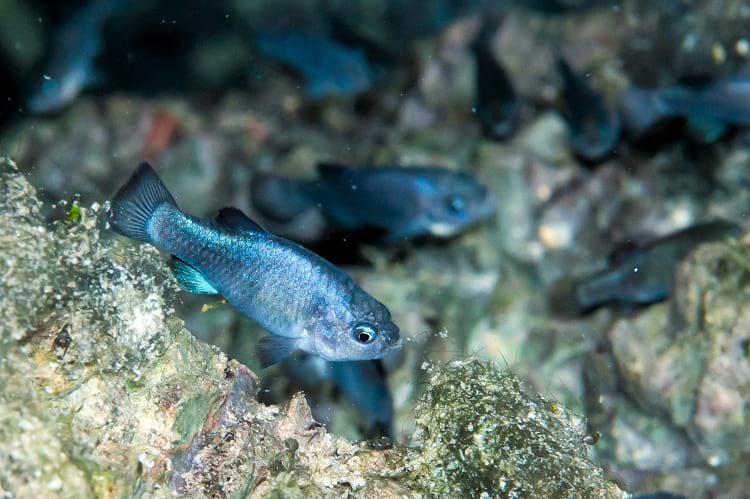 Fed by aquifers and with a water temperature of 33-degree C, the Devils Hole geothermal pool in the Mojave Desert doesn’t appear to be a likely place to sustain life. It is found in the Mojave Desert in the 40-acre Death Valley National Park in the Ash Meadows National Wildlife Refuge in Nye County, Nevada in the United States. Formed in a fissure in the Cambrian carbonate rock, it lies around 49.21 feet below the surface. Its position ensures that it receives very little direct sunlight and it is dim inside the limestone cavern.

The surface area of the pool is around 11.48 feet by 72 feet. There is a shallow rocky shelf at one end that measures 16 feet by 11.48 feet and has a depth of 9.84 feet. From this shelf, the pool’s depth plunges down to 436 feet. It could be even more, but the caverns haven’t been fully mapped so far. 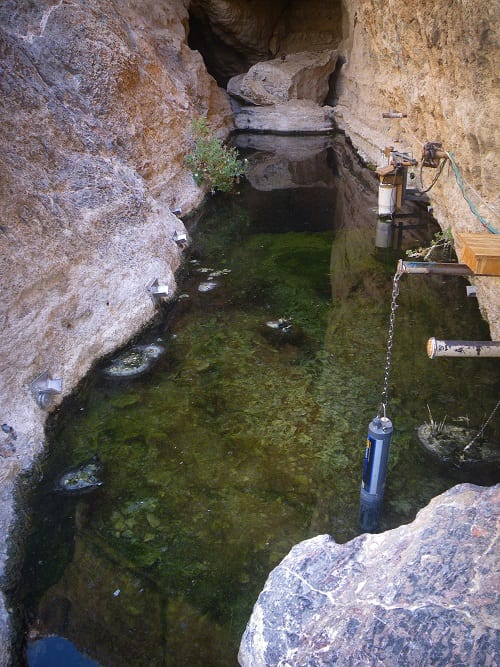 Seismic activities in far off places have a decided effect on the pool. When there are earthquakes in Mexico, El Salvador, Chile, and even Japan and Indonesia, they apparently cause underground tsunamis in the Devils Hole pool. The pool water recedes and then rushes back in forcefully.

The shallow rocky shelf in the pool is home to the tiny and short-lived Devils Hole Pupfish; they have a lifespan of only one year. The fish mainly live near the surface on the rocky shelf, at a depth of 1.14 feet, and feed on the Spirogyra and Plectonemaalgae that grow on the rocky sides of the pool, but scuba divers have also observed them at a depth of 60 feet in the pool’s deeper section.

The male fish have an iridescent bluish tinge and the females have an olive-green tinge. They got the name ‘Pupfish’ on account of their tendency to frolic in the water. The fish lay eggs and spawn throughout the year, but the population follows a seasonal cycle, with a higher number of fishes seen between April to June than in November.

Nobody knows exactly how these tiny fish came to be in the Devils Hole pool, but the assumption is that they may have come some 10,000 years ago when the water level was up to the surface lip and there were streams flowing into the pool. At the end of the Ice Age, the ice retreated, the surface streams dried up, and the fish found themselves isolated in the pool, with no way out.

Over the centuries, the fish have adapted and thrived in the high temperature, high salinity, and low oxygen content of the water in the Devils Hole pool.

In recent years, however, the once thriving population has gone into a serious decline and if that trend continues, they might very well become extinct.

There may be a variety of reasons for this drastic decline in the Devils Hole Pupfish population. The inbreeding factor is one reason. Since the end of the Ice Age, the trapped Pupfish population could only breed with one another and that may have led to defective DNA in later generations.

Another possible cause may be the rise in water temperatures which makes it difficult for the fish eggs to survive and which also adversely affects the growth of the algae on which the fish feed.

The tsunami-causing earthquakes also cause a decline as the waves they generate sweep away fish eggs and larvae from the shallow rocky shelf.

In 1967, the Devils Hole pupfish joined the Endangered List. This came about thanks to the lobbying of the ichthyologist, Carl Hubbs, who convinced President Trumanin 1952 that they had to save both the Devils Hole Pupfish and their unique habitat. Earlier, in November 1954, the National Speleological Society sent scuba divers into the pool to carry out the first ever count of the Pupfish and they counted around 300 individuals.

Given that there were only a few hundred of them in the pool and as this was their only habitat – the smallest, by the way, of any known vertebrate animal on Earth – the possibility of their extinction was very real. In the 1970s, the US government formed the Pupfish Task Force and the Desert Fishes Council to protect the fish, and the US Supreme Court ruled that private companies could not pump out groundwater from the area as that led to a fall in the level of the Devils Hole pool water and affected the well-being of the fish.

Conservation efforts to save the Devils Hole pupfish

Saving the Devils Hole Pupfish is a tricky proposition as there are very few remaining individual fish and they have adapted over thousands of years to exist only in this unique habitat.

For conservation purposes, the Park Service researchers have been removing some of the eggs, larvae, and adult Pupfish to a specially prepared aquarium at the Ash Meadows Fish Conservation Facility where the conditions of the original habitat have been recreated as closely as possible. They first moved the eggs to the facility in April 2013 and these have since successfully hatched, and the researchers reported in November 2013 that the larvae were feeding and growing. 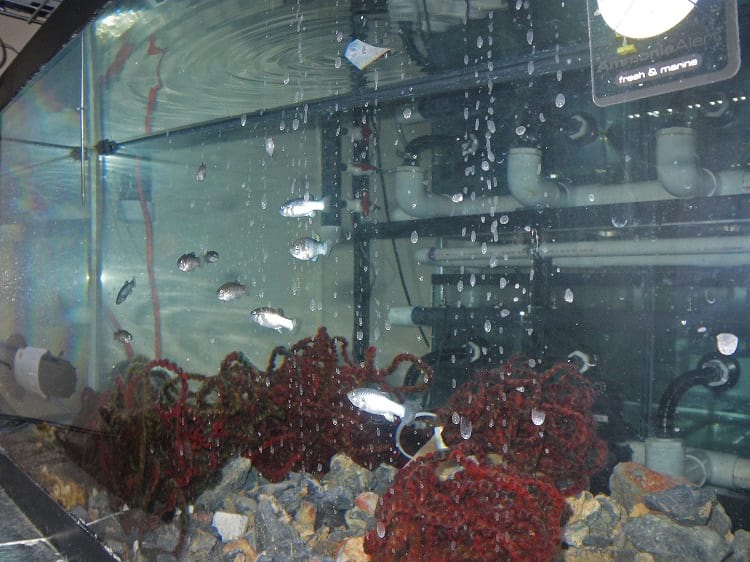 They remove no more than six adult fish in a year as harvesting more than that has shown to have a deleterious effect on the overall population.

Under the assumption that changes in the temperature of the pool water may have reduced the natural food of the Devils Hole Pupfish, the Nevada Wildlife Department’s National Park Service has been feeding them to sustain them and, hopefully, halt their population decline.

They have installed natural as well as artificial hideouts on the shallow shelf on which most of the Pupfish live to increase the survival chances of the Pupfish eggs and larvae, and they check on these at two-weekly intervals. The researchers intend to replenish the Devils Hole Pupfish population with the captive-bred fish and to establish refuge populations in other locales to prevent their extinction. Raising the fish for too long or in entirety in captive conditions is not ideal as they become domesticated and lose the behavioural traits that allow them to be self-sufficient enough to survive in the wild.

Enjoyed this article? Also, check out “Devils Tower in Wyoming: A National Monument and a Geological Wonder“.

Previous Article
NASA’s Deep Space Network: How We Communicate with Space Probes Billions of Miles from Earth
Next Article
The Catacombs of Paris: A City of the Dead Under the City of Love