Terracotta Army: An Army to Protect the Dead in Their Afterlife 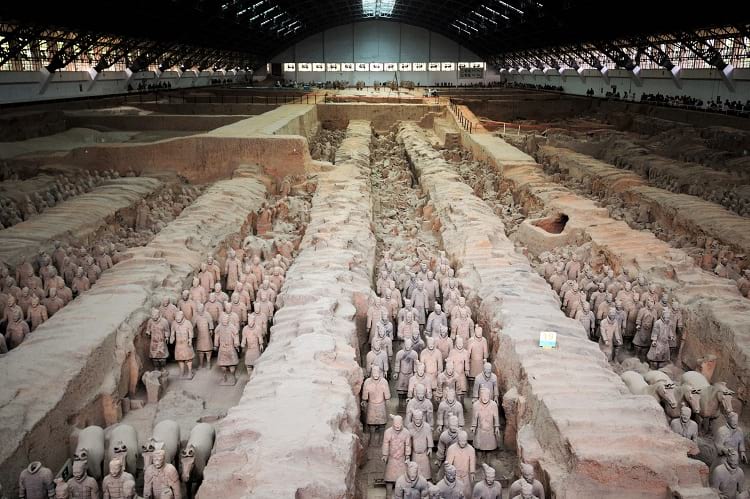 Over 40 years ago, in March 1974, a group of farmers in China discovered a set of life-size statues made out of earthenware called the Terracotta army, which represented the army of Qin Shi Huang, the First Emperor of China. The statues were discovered by the farmers in Xi’an city of Shaanxi province when they were digging a water well close to the Emperor’s tomb at Mount Li. It is said that the First Emperor had chosen Mount Li as his favored location to be buried at. He believed the location had good terrain as it was brimming with jade and gold mines.

Why the Terracotta army was built?

Similar to the Egyptians, the Chinese too have a belief that once someone dies their tomb is filled with gifts and items they would need for their journey and life after death. This Terracotta army was buried with the first emperor for a similar reason of protecting him in his afterlife. 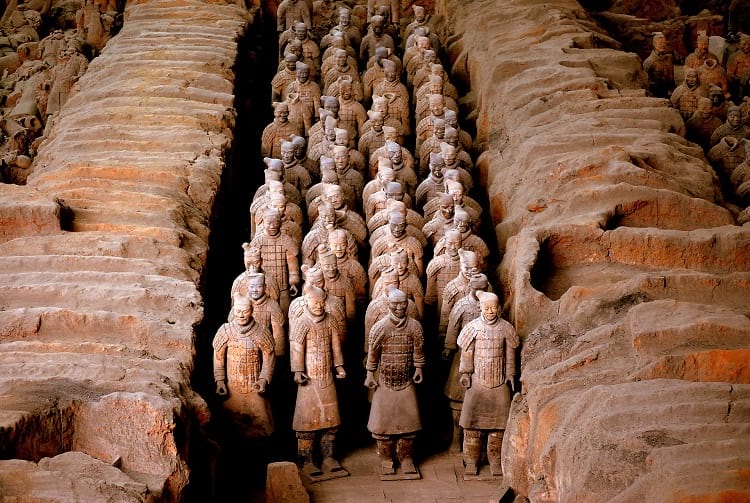 When the discovery of the farmers was made public, a group of Chinese archaeologists became increasingly interested in the site. Their investigation revealed the largest group of pottery statues ever found. The set of statues that were found were just the tip of the iceberg. The entire underground area supposedly measures 98 sq. kms. It is also estimated that there were 3 pits that held these statues and have more than 8000 soldiers, a combined 650 chariots and horses. The statues there have been constructed in accordance with their role in the army. For instance, generals were the tallest whereas lower-ranking officials were shorter. Construction of the army

The earthenware statues were made to replicate the original army. The statues included those of chariots, horses, archers, soldiers and their different ranks like armored soldiers, unarmored infantry, cavalry men, drivers of chariots, spear-carrying charioteers, and kneeling archers amongst many more. It is interesting to note that these army figures were manufactured in workshops using the good old assembly line method. Specific parts of the body like the head, arms, legs, and torso were created separately and then assembled. The tough work of the laborers and local craftsmen is visible in the splendor that they created. They used at least 10 different molds to create the faces, upon which clay was added to make each face unique. A terracotta soldier with his horse. (shankar s. / Flickr)

A lot of effort was taken to not only make the statues but also place them in the tomb. The statues weren’t just placed haphazardly instead they were placed in the precise military formation in accordance with rank and duty as a real army. In fact, the statues wore real armor and held real weapons to give them a more realistic feel. Unfortunately, a lot of these weapons were looted a little after the army was created. Other weapons seem to have decayed, even though they were coated with a chemical before burial that would protect them from ruin. Some weapons also have engravings on them displaying their date of usage before burial. The army had also been brightly painted to add to the realism. Just like the weapons, the paint too had faded away and just hints of it remain today. 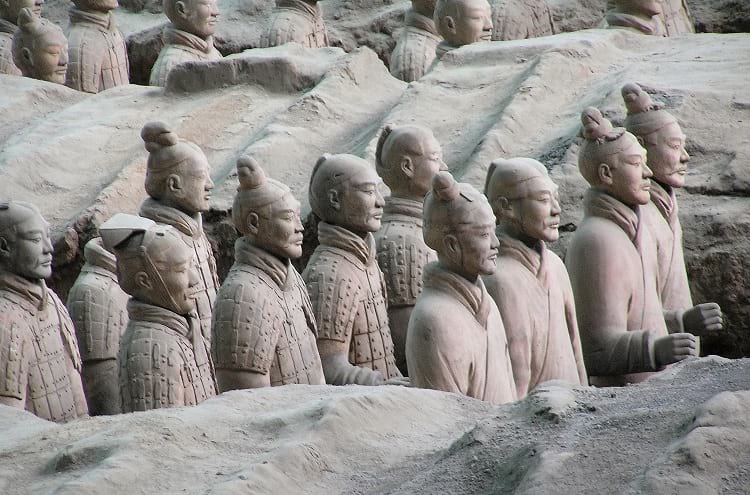 Attractions linked to the army

Multiple museums, consisting of an enclosed roof structure, have been constructed over the pits of the soldiers. The museum over Pit 1 is over 14260 square meters and was opened to the public in 1979. Whereas the newer museum over Pit 2 is 6,000 sq meters and was opened to the public in 1994. Recently a mini version of the Terracotta army was unearthed from a 2100-year-old pit in China. Statues in this set are as small as 20 cm and aren’t comparable to the original Terracotta army. It is believed to have been built as a toy set for a young prince and has around 500 pieces in its set. Impressively though, the statues in the mini set are arranged just as precisely as the original one.

Enjoyed this article? Also, check out “Traditional Yaodong, Shaanxi Province: The Cave Dwellings in Which Many Chinese People Still Live“.

Previous Article
Mapogo Lions: The Six Legendary Lions That Meant ‘Bloody’ Business in Their Quest for Dominance
Next Article
The Strange Case of Emperor Norton, the Self-Anointed Monarch of the United States