The Earth is one amazing planet that is home to a variety of animals, birds, plants and organisms, which live harmoniously with each other. Various natural habitats are spread across all the continents that have their own peculiarity; for example, Antarctica is covered in snow, while Africa is known for its hot deserts. South America stands out for its wet Amazonian rainforests, while Europe is famous for its ancient human history. Wouldn’t you be surprised if we told you that a place called Biosphere 2 housed part of almost every section just mentioned, all under one roof?

Biosphere 2, also dubbed as “Planet in a bottle” – a huge research facility located in Tucson, Arizona in the United States – is spread across a sprawling 40-acre campus, with at least 7 acres reserved for state-of-the-art research labs, administrative offices, classrooms, housing centres and conference halls. Built between the years 1987 and 1991 and named after the natural biosphere of the Earth, Biosphere 2 was originally constructed as an artificial, enclosed ecological system, which is considered to be the largest, completely self-sufficient, man-made structure to have ever been built.

With its very own coral reef-lined ocean, complete with a variety of fish, a tropical rainforest that had a wide range of trees, savanna grassland, mangroves, a fog desert and an agricultural system, the fully-sealed structure was built as a forerunner to an enclosed space colonization program, which unfortunately did not succeed eventually. 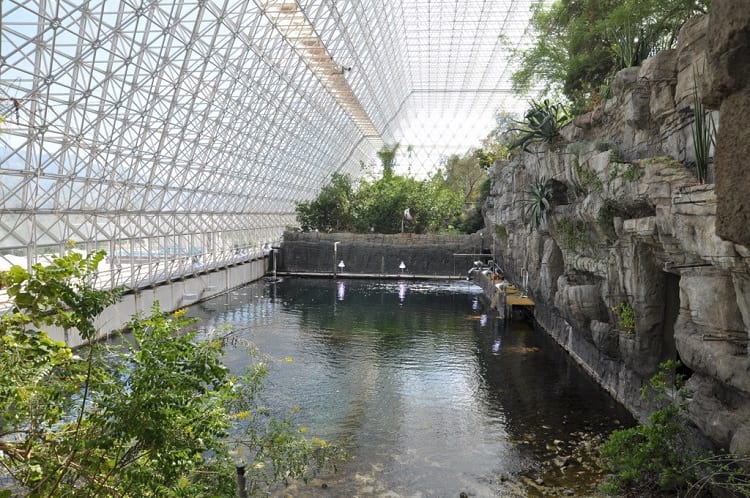 During the first experiment that lasted two years from 1991 to 1993, eight volunteers, including founding members Taber MacCallum and Jane Poynter, medical doctor Roy Walford, ecologist Mark Nelson and researchers Sally Silverstone, Abigail Alling, Linda Leigh and Mark Van Thillo, entered Biosphere 2 to test if humans could run their very own world, which had all the facilities at their beck and call. But sadly, the self-sufficient controversial mini-world ran into hot water as soon as the program began. Another view of the ocean inside the Biosphere 2. (Windell Oskay / Flickr)

The mega glass and steel spaceframe structure, which had an inbuilt oxygen supply in the form of natural ecosystems that were designed inside, it worked like an airtight container with no supply of oxygen from the outside world. The best breeds of livestock were brought in from various parts of the world, which would help the artificial biosphere function similarly to the real one. Trees, to continuously provide oxygen to living things were planted, which would keep the massive bio-dome running smoothly. Special planning and construction techniques took care of the heating and cooling systems of the facility, while accurate engineering went into making sure the enormous glass house functioned perfectly. Despite the best of everything that went into the making of this self-contained world, there came a point when Biosphere 2 had become almost inhabitable, with volunteers desperately wanting to make it outside.

But what had actually gotten wrong?

While some call it a multi-million dollar glorious debacle, Biosphere 2’s failure was a result of a lot of significant technical flaws. Some months inside the facility and volunteers began noticing that oxygen levels had started to dip sharply. Although trees in the savanna and rainforests were taking in all the carbon dioxide from humans and animals, tiny microbes present in the soil in the marshlands were metabolizing and using up oxygen at such a fast rate that hardly anything was left for those on top of the chain. As a result, carbon dioxide was released in high quantities, which the trees couldn’t exchange so quickly. Later with unethical practices, oxygen was pumped in from outside sources, which no longer made Biosphere 2 a miniature self-contained world in the first place.

Also, one of the major reasons for the facility’s failure was the psychological problems that started to creep up between the crew members as days and months passed in isolation. The members were not trained professionals in specific fields and had to make decisions based on consensus. Another major factor was that since they were completely alienated from the outside world, they couldn’t get the expert technical advice they needed to run the biosphere all by themselves. The crew members were not agronomists, who despite bringing in best crop seeds for plantation and food, generate enough to sustain for a long period of time. Some “Biospherians” (as the crew called themselves) were also accused of sneaking into the outside world, citing emergency family issues and bringing back outside items for use, that put the entire Biosphere 2 scheme under heavy scrutiny. After the first test group returned with little success, a second 10-month-long mission with seven members onboard begun and a lot of technical flaws were rectified, hoping for accomplishment the second time round in 1994. But merely two months into it and the company – Space Biospheres Ventures – which owned and managed Biosphere 2, was dissolved and the mission was abruptly aborted within six months. In December of 1995, Colombia University took up the management of Biosphere 2 and ran it successfully for research purposes for 8 years until 2003, when it ran into legal issues. In 2005, the new owners, Decisions Investments Corporation, put the site up for sale for housing and retail reasons, until Arizona University acquired its ownership, management and research rights in the year 2007. Currently, Biosphere 2 pulls in as many as twenty thousand visitors each year and aims at advanced research and understanding of global scientific issues. It also aims at researching more about the Earth and its future by ways of technical and methodological progress. But what remains towards the end is a major technical fiasco, which was originally intended to be a self-sustaining miniature version of the earth, eventually turning into one of the thousands of research facilities that run across the world. Thankfully, Biosphere 2 still remains the biggest artificial vivarium man has ever created.

Enjoyed this article? Also, check out “Amazon Spheres: An Unexpected Rainforest in the Amazon HQ at Seattle“.

Recommended Read:
Dreaming the Biosphere: The Theater of All Possibilities | By Rebecca Reider

Previous Article
Charles Osborne Had Hiccups For 68 Years and It Only Stopped Just Before He Died
Next Article
Maunsell Sea Forts: The Forts That Tell the Tale of WWII