Can a Spider Spin Webs on Acid and Other Drugs? 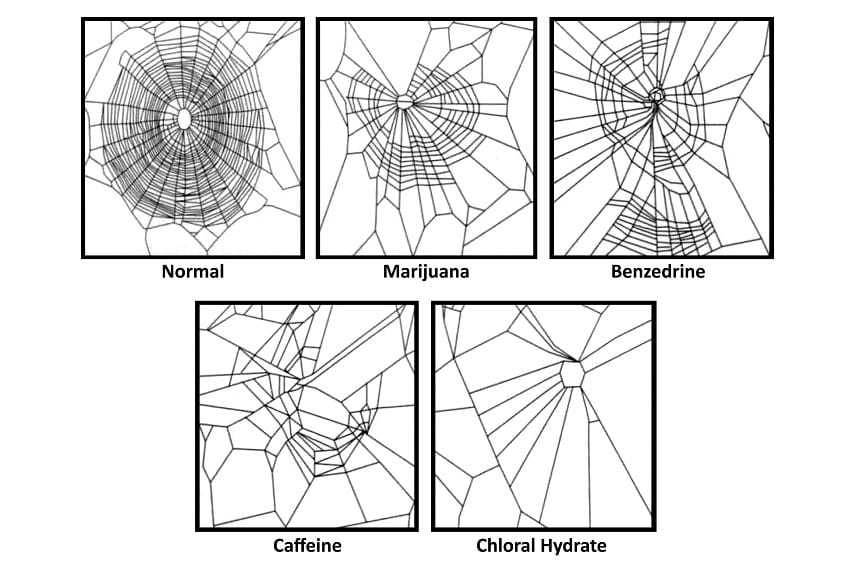 Spider on drugs: A spiders ability to build web under the influence of various substances. (NASA)

Spiders are the largest group in the arachnid class. All spiders have eight legs, six to eight eyes, spin silk and can be found in six of the seven continents. It is only Antarctica where they are not native but you can guarantee that some scientist has one in a terrarium either for experimentation, or to cover all seven continents. Or both. These organisms have successfully adapted to a wide range of habitats. Those who study them have been trying to gain a deeper understanding and their newly mapped genomes may be the key to unlocking many of the spider’s secrets. A major reason why animals are studied is to find out what would happen if humans were exposed to the same circumstances. Spiders and insects are becoming a gateway for this as testing on larger animals such as mice is being prohibited more and more due to law restrictions based on cruelty.

In order to see how the creatures would react to the narcotics, the spiders were covered in the chemicals to see how their behavior would change and their webs would form. Spider silk is an incredible material made of super-strong protein chains. Millions of years of fierce evolution has unearthed a ruthless animal let alone killing-machine since their genetic emergence from crabs. Their silk is stronger than steel and incredibly tensile beginning internally as a soluble liquid-like form before leaving the spider as a hardened fiber. Scientists are continually trying to source the material in the hope of replicating it. The spun material from the spidery spinnerets would be an extreme money-spinner for companies also.

Spider on drugs: The experiment and results

Hans Peters – A Germany scientist – created a system to record Spiders spinning webs on various substances via their sugar water, most of which illicit. It was more to see how the spiders would react as to any scientific predisposition. These photos became famous none-the-less which gained the attention of some in the scientific sphere. However, it was Peter’s pharmacologist Peter Witt who did most of the practical elements as Peters himself, could ill afford to stay up late and perhaps lost hope in the investigation. Witt hoped the drugs would make the spiders lose track of time anyway as they normally only build webs at night. Hans Peters grew disillusioned with the experiment but Witt was fascinated, making it his primary work.

Science has come on leaps and bounds since this experiment in 1948. Back then they gave spiders samples of urine from people suffering from schizophrenia thinking it would have an effect, which it ultimately did not. In terms of the drugs sprayed, the results are not as obvious as they look as scientific knowledge now denotes that what chemicals do to an arachnid’s brain is likely not the same as humans. LSD, marijuana, benzedrine, sleeping pills and caffeine were tested, and while the webs show that caffeine is the most dangerous of the drugs tested, it may not be the same for humans. It is possibly just an alteration to a spider’s muscle memory as opposed to changes in the brain. Although it is now widely accepted, the dangers of over-caffeinating.

“For instance, naturally occurring amounts of caffeine can kill animals that need a hormone called Octopamine—a category that includes spiders, but not humans. That might help explain why caffeine devastates spider web production.”

One thing the findings definitely show is that for all animals, and for all chemicals, moderation is key.

Enjoyed this article? Also, check out “Luigi Galvani: The Man Who Fuelled the Idea of Re-Animating Human Corpses“.

Previous Article
Digital Beijing Building: The Landmark of 2008 Beijing Olympics is Now a Virtual Museum and Exhibition Centre
Next Article
Solifugae: Unique Creatures That Are Neither True Scorpions Nor True Spiders