Maunsell Sea Forts: The Forts That Tell the Tale of WWII 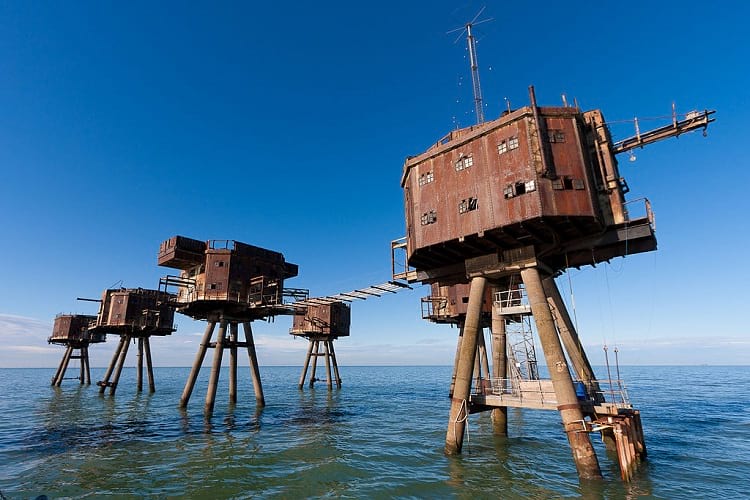 With an original plan to build 49 sea forts on the Thames Estuary and 38 on the Mersey Estuary, Great Britain set into action to ward off intense air attacks from the Luftwaffe during the World War II. All three armed forces of Nazi Germany had united during WWII to form a formidable aerial warfare branch known as the Luftwaffe.

The Maunsell Sea Forts named after Guy Maunsell, the civil engineer who designed them, were built in 1942. Each 300-tonne tower was constructed on land, transported to sea and then sunk into position. These humongous monstrosities emerging from the Thames like alien transformers are a constant reminder of the ugliness of the war.

The forts, although referred to collectively, were mainly broken up into two categories. One set that was operated by the Royal Navy consisted of the naval forts – Rough Sands, Sunk Head, Tongue Sands and Knock John, built between February and June 1942. Each fort consisting of seven floors had Bofors guns, radar and 120 men living below the waterline. The second set, specially designed in 1943 for use by the Army in anti-aircraft defence, had the concept of six towers around a central control tower connected by metal walkways and was scattered over two locations. The Queens AA Towers, Formby AA Towers, and Burbo AA Towers were positioned in the Liverpool Bay. The Nore Fort, Red Sands Fort, and Shivering Sands Fort stood in the Thames Estuary.

The Thames Estuary is one of the largest inlets of Great Britain. Apart from being a major shipping route, it is also an important commercial shipping channel. One of the objectives of the Maunsell naval forts was to watch out for German air raids and put them off. The main objective was to thwart the attempts of the Germans to lay mines by aircrafts in this shipping channel. The most successful encounter was between the Tongue Sands Fort and 15 German fast attack crafts known as E-Boats. The encounter took place on the night of 22-23 January 1945, when the German E-Boats were fired upon from Tongue Sands Fort’s 3.7″ guns and unable to identify the origin of the attack, the Germans fled. These Naval and Army marine fortresses helped take down 22 enemy aircrafts and several German “retaliatory missiles”, V1s and V2s saving numerous lives. However, after the WWII ended, these forts were no longer of tactical significance and were withdrawn from active service. The Nore Army Fort does not exist anymore as it was demolished by 1960 following severe damage during the 50s. Tongue Fort collapsed in 1996 after a heavy storm. By the end of the 1950s, all these forts had been demilitarized and many were wrecked due to repeated collisions with civilian ships; but the Shivering Sands, Red Sands, and Fort Roughs stand tall and eerily peer from the waters to this day. In the early 70s, the forts’ designs acted as inspiration for offshore oil and gas rigs, they can be addressed as the predecessors of modern offshore drilling rigs.

A preposterous fact is that, though some of these towers were dismantled and some could not withstand the sands of time, a few abandoned forts were taken over as pirate radio stations! Screaming Lord Sutch, an English musician founded a pirate radio called Radio Sutch in 1964 in a fishing boat and relocated to the Shivering Sands Fort in May, the same year. Some of the other pirate radios were Radio 390 on Redsands, Radio Essex on Knock John and Tower Radio on Sunk Head. With the Marine Broadcasting Act that was passed at midnight on Monday 14 August 1967, offshore pilot radios were declared illegal. The result of the act was the launch of Radio 1 and Radio 2 by BBC in 1967. The absurdity didn’t end there, a nearby Navy fort of a different design; Roughs Tower has been occupied by the Principality of Sealand, a self-declared micronation since 1967. In a series of ludicrous events, Stephen Turner, an artist embarked on a strange project of living in isolation in one of the towers still standing, the Shivering Sands Fort in 2005. It seems the Maunsell Sea Forts are not only these strange looking outcasts on the sea but also by sheer stroke of luck, attracted some strange activities! Turner lived there for 36 days which was the tenure of duty of a WWII soldier. He posted updates during his stay and later authored a book on his experiment at sea. 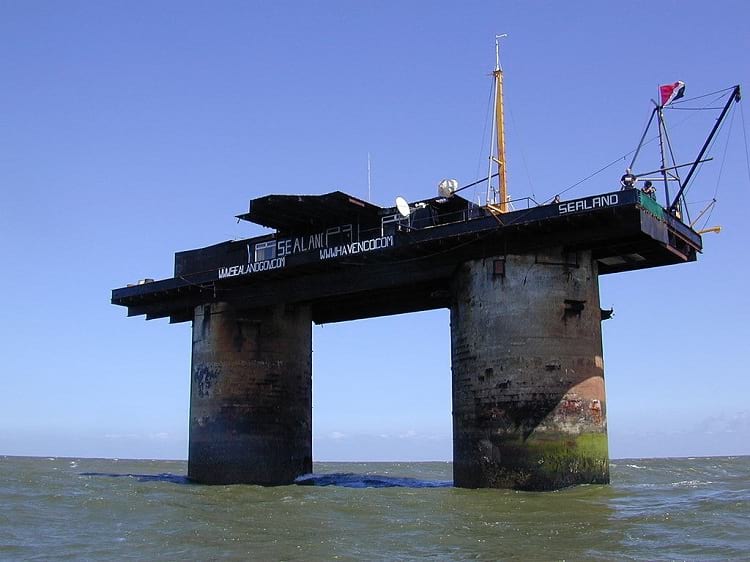 The occupied naval fort is now a micronation, known as Principality of Sealand. (Ryan Lackey / Flickr)

In 2003, an organization named Project Redsands was formed with the sole purpose of restoring the Redsands Fort. The organization ensures safe public visits to the fort, gives information about the detailed history it and how far the organization has reached in its efforts of preserving this WWII relic.

Maunsell’s clever strategy of ‘take to the sea’ thwarted some serious attacks during WWII from the Luftwaffe. The forts helped the British to defend and attack from the middle of the sea, making it confusing and daunting for the attackers to cause significant damage. The forts proved their credibility by giving the soldiers the right platform to retaliate.

Enjoyed this article? Also, check out “Prora: Hitler’s Colossal Resort by the Beach That Never Served Its Purpose“.