McMurdo Station: The Largest Research Centre in the Antarctic 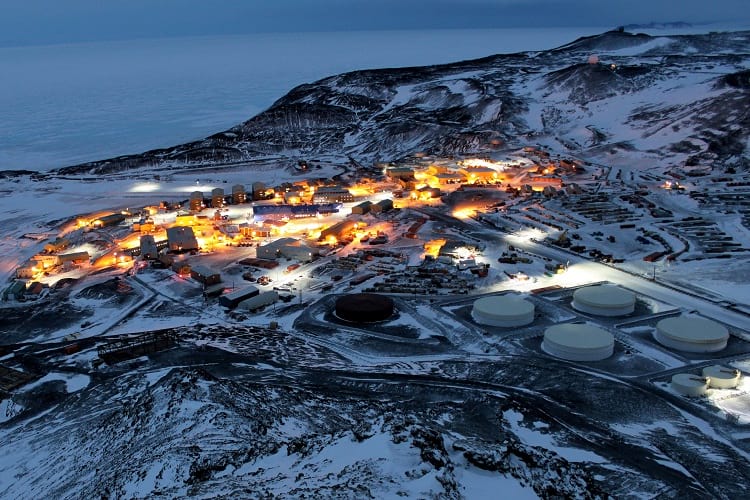 While extensive swathes of Antarctica remain unpopulated, there are several international research stations on the continent that maintain personnel there throughout the year. The United States operates three research facilities under the National Science Foundation’s U.S. Antarctic Program, the largest of which is known as McMurdo Station.

This coastal station is located on the southern tip of Ross Island on the bare volcanic rock shore of the McMurdo Sound. It is about 1360 kilometres from the South Pole and about 3864 kilometres to the south of Christchurch, New Zealand. As the largest station in Antarctica, it serves as a starting base for research expeditions headed further inland and provides supplies to the research camps.

In 1902, Robert Falcon Scott, the famous British explorer, set up the first base camp near the current location of McMurdo Station. The wooden hut that he built—which is named Discovery Hut—still stands along the shore at Hut Point. 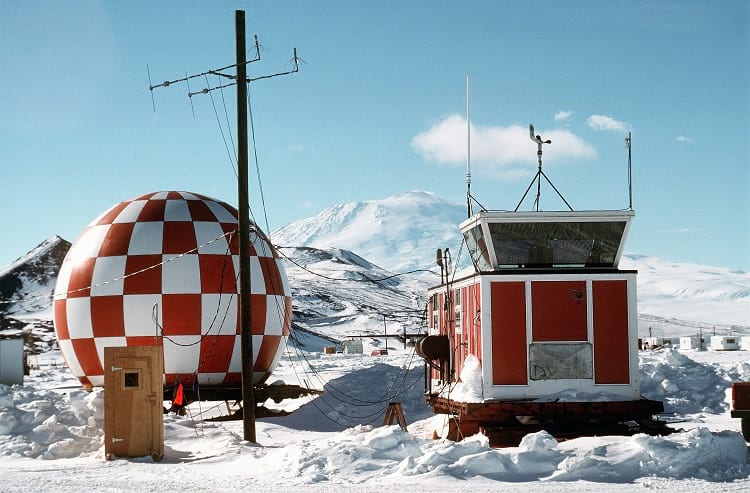 Research carried out at the McMurdo Station

The research carried out at McMurdo Station covers multiple scientific disciplines such as geology, geophysics, glacial geology, glaciology, aeronomy, astrophysics, biology, and ecosystems. If you would like more information about the field projects that the McMurdo Station supports in the Antarctic region, please visit the USAP Science Planning Summaries Archives on the Science Support Page.

Additionally, the McMurdo Station also hosts writers and artists as part of the Antarctic Artists and Writers Program.

Surrounded by icescapes, with the volcanic Mt Erebus looming in the background, McMurdo Station resembles a frontier town you might encounter in a science-fiction novel.

Helicopters come and go with regularity, and there are over 100 structures ranging from shacks to three-storey buildings across a 4 square kilometre area. These structures include administrative buildings, dormitories, the Albert P. Crary Science and Engineering Centre, repair facilities, a water distillation plant, a power plant, a fuel tank farm, a fire department, a post office, stores, warehouses, clubs, a church, an ice pier, three airfields, and a diving recompression chamber. The power and telephone lines for these buildings are all above the ground, as are the water and sewer connections. 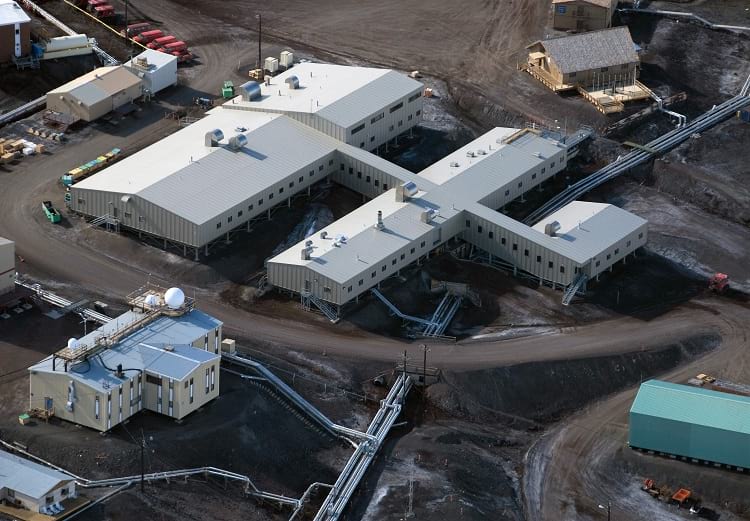 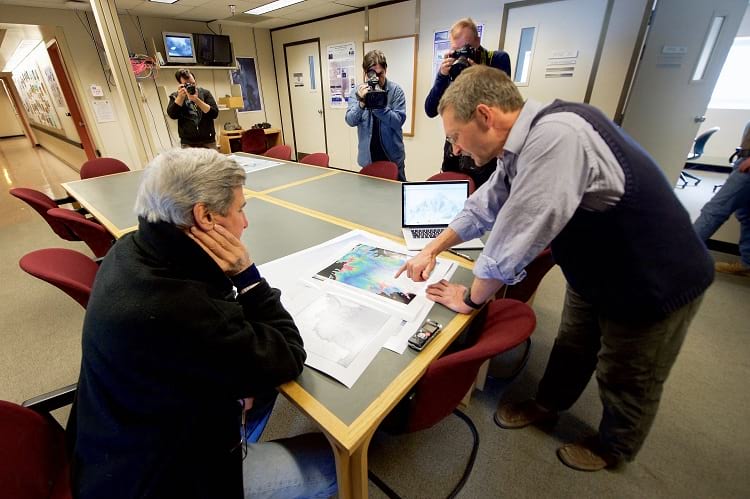 U.S. Secretary of State John Kerry with a scientist inside Crary Labs at McMurdo Station on November 12, 2016. (U.S. Department of State / Flickr)

Given the icy landscape of Antarctica, it is necessary to take special care when it comes to waste disposal in order to avoid adversely impacting the environment. McMurdo gets its electricity from three wind turbines, and, to heat the buildings, it reuses the waste heat generated from the desalination plant.

The sewage plant carries out wastewater treatment on the sewage and compresses the resulting solids. They are then dispatched for incineration to the US mainland. Before the sewage plant was built at the McMurdo Station in 2003, the sewage was diluted and drained into the sea. When the McMurdo Station opened in 1956, it had a total population of 93, and this was considered a lot back then. At present, the population hovers in the neighbourhood of 1200. That makes it the largest populated station in Antarctica. However, in the winter months—when the temperatures are known to drop to minus 50 degrees Centigrade and the snow can pile up to 1.5 meters—the population dwindles down to around 250 people. They are mainly research scientists and workers that have to remain at the station to look after the regular operations and maintenance of the place. So, winter months are quiet, but things can get livelier in the summer. Along with being more populated, the station is largely without snow, and the temperature can rise to plus 8 degrees Centigrade. When the residents are not busy with their research work, they keep themselves entertained by participating in various sports and recreational activities. To get around McMurdo Station and its surrounding environs, people generally use snowmobiles and other vehicles. You must drive slowly—on the righthand side of the road—not just on account of the snow, but because the speed limit at the McMurdo Station is 30 kilometres per hour.

The US government set up a 1.8-megawatt nuclear power plant on Observation Hill in December 1961. It turned out to be a costly mistake. It encountered several operational problems and required extensive repairs. Ultimately, the US government decided to shut it down in 1972. By then, however, the nuclear reactor – that everyone at the station called Nukey Poo – had contaminated the surrounding soil and turned it radioactive. Several tons of it had to be removed. Now a plaque commemorates the existence of the nuclear plant, and the site is a Historic Site or Monument.

Another, less toxic commemorative memorial on the McMurdo Station is the Richard E. Byrd Historic Site or Monument. The United States designated it as such at the Antarctic Treaty Consultative Meeting. The bronze bust of Richard E. Byrd sits on a black marble base, and the whole thing is kept on a wooden platform. It was unveiled in 1965. The accompanying inscription gives visitors an overview of Byrd’s polar expeditions. Except for pioneers like him, we probably wouldn’t have advanced research centres like the McMurdo Station in the Antarctic region.

Previous Article
The Story of the Last Tree of Ténéré is Short and Sad
Next Article
Unit 731: Gruesome Human-Experimentation To Test Biological And Chemical Warfare In Japan During WWII