Zaha Hadid: The Prominently Leading Woman Architect Who Ruled the Roost in a Man’s World 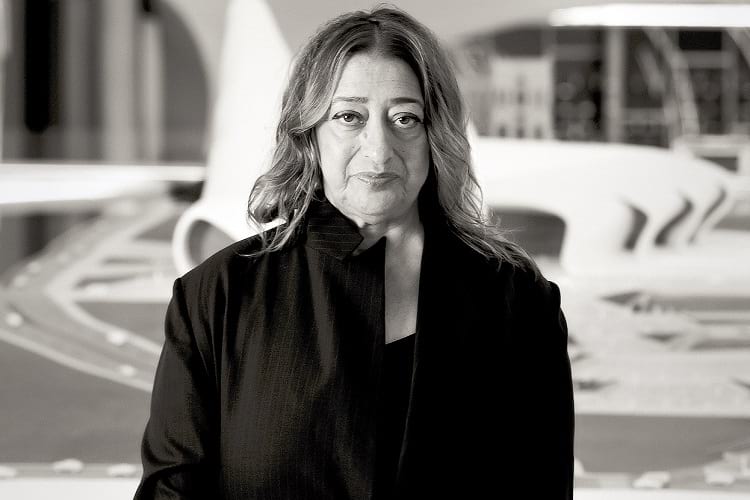 It is said that a woman is the architect of society; but little did they know that one woman would actually go on to become the architect of the world in the truest sense of the word. Dame Zaha Hadid, the celebrated Iraqi-British architect, best remembered for her ideas of deconstructivism and the curves she added to every piece of building she designed across the globe. Though the gifted architect passed away in the year 2016, her work still continues to inspire budding talents that hope to walk in her footsteps someday.

Born in Baghdad, Iraq in 1950, Zaha grew up in a moderate and secular Middle Eastern country, where girls had equal opportunities as boys during those days. The Iraq of her times was neither war-torn nor was it stricken with misery like it is today; instead it had a more Westernized outlook and approach and had an economy that was rapidly growing. During her childhood days, there were a lot of women who had made a name for themselves in different fields of profession, but there was not a single woman architect that Iraq had ever produced. Confident and determined from the very beginning, Zaha had made up her mind to do something that no woman had ever done before. Her influential family, comprising of her father – Muhammad al-Hajj Husayn Hadid – an industrialist, economist and politician par excellence, her mother Wajeeha Sabonji – an artist, and her brother – Foulath Hadid – a prolific writer and expert on Iraqi affairs – strengthened her resolve further to make a mark for herself in whichever field of work she chose.

After she completed her elementary education from boarding schools in England and Switzerland during the late 60s, Zaha enrolled for her mathematics majors in the American University of Beirut. Later in 1972, she moved to London to pursue architecture from the world renowned Architectural Association School of Architecture, where she studied under future great architects like Rem Koolhaas, Bernard Tschumi, Will Alsop and Daniel Libeskind to name a few. Although the 70s was a time when the trend of swinging more towards historicism and post-modern styles of architecture was prevailing, Zaha had her own ideas of design. She was strongly influenced by the work of her professor Koolhaas, who was working on principles of neo-modernity in architectural style during that time. When Zaha graduated in the year 1977, Koolhaas offered her a partnership job at his and Elia Zenghelis’ (Zaha’s another tutor) Office for Metropolitan Architecture (OMA) firm in Rotterdam, in the Netherlands, but her career at the OMA was very short-lived. She had other better and bigger plans.

Before launching her own brand ‘Zaha Hadid Architects’, Zaha taught at her alma mater for some time, while polishing and honing her own architectural drawing skills in the meanwhile. She emphasized more on the suprematist style, the Russian art movement of the 20s, which focused on geometric forms and patterns using a limited range and blend of colours. She created her own art form, terming it ‘fluid kind of spatiality’, which represented the changeable modern life from her perspective. People in the field had named her ‘the inventor of the 89 degrees’, for she never created anything that stood perpendicular to the ground. Her designs were always less than 90 degrees in one way or the other.

She had a broader sense of space and she never paid enough attention to minute details first. Zaha’s sense of perception and the way she designed a sketch was mind-bending, as the shapes seemed to morph into something else entirely while one passed through them. She dabbled more in shadow work along with indefinite and mostly confusing design forms. Though Zaha was more into abstract forms of design, something that wasn’t very popular back then, her idea wasn’t very well received in the initial stages of her career.

Modest beginnings in the field of architecture

While Zaha was confident that she would carve a niche for herself in the field of architecture, it took a long time for her drawings to be recognized the world over. Clients willing to invest money in her designs could not fully understand her idea of art; because her architectural drawings, which were well ahead of their time, weren’t functional as far as constructing an actual building based on them was concerned.

In the year 1982, when Zaha won a competition to design a spa called The Peak in Hong Kong, it looked as if her career had received a head start. But it was not the case. The plan was abandoned more quickly than it was taken up. The plan never materialized and it was only when she designed the Vitra Fire Station in Weil am Rhein on the German-French and Swiss border that her hard work had finally been recognized. Though the fire station was later converted into a museum, Zaha had eventually found her true calling.

A naturalized citizen of the UK by the late 70s, Zaha began working her way from small edifices in the country to slowly and steadily making waves on the international architectural scene. First building a ski jump in Innsbruck, Austria, between the years 1999 and 2002, which also had a cafe and a panoramic view of the mountains, she worked in the United States, where she had won commissions to design two art museums – a first for a woman in America. Coincidentally, she was competing against her own mentor and dear friend Rem Koolhaas. By the mid 2000s, Zaha had started winning international competitions, which allowed her to convert her unusual architectural drawings into designs for the whole world to see. The Phaeno Science Center in Wolfsburg, Germany, built between 2002 and 2005 was one of her most ambitious projects. Not only was the building functional but it also had space for recreational activities underneath the main structure. The building, which resembles a gigantic ship, is complete with a café, a shop and an entrance to the museum upstairs. 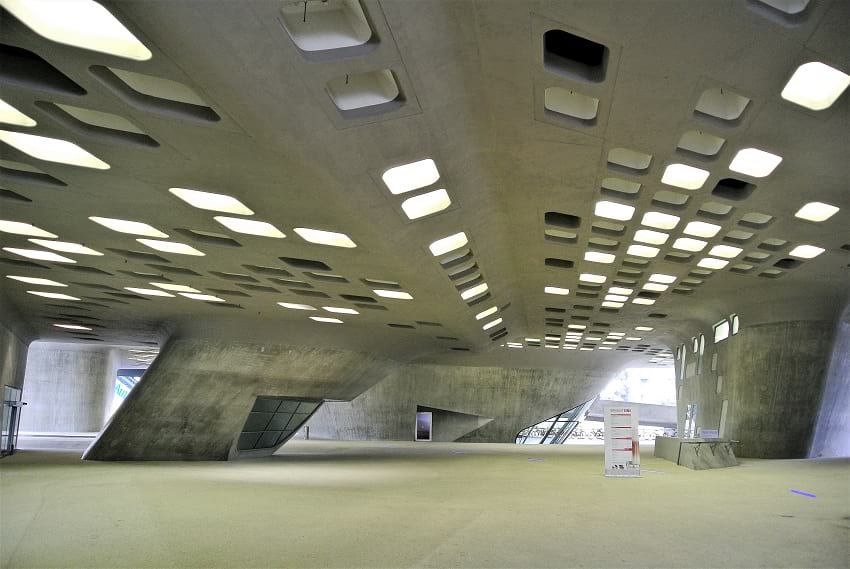 The ground floor of the science center. (Spyrosdrakopoulos / Wikimedia Commons)

Zaha Hadid’s designs on paper had begun dotting the world in reality, with countless countries having one of her creations in at least one of their cities. She had achieved a celebrity status and her building designs had gained a landmark status by the mid 2000s and that had cemented her position amongst the topmost women in the field. After the Contemporary Arts Center in Cincinnati, USA, another museum project came her way. This time it was in Copenhagen, Denmark, where she designed an extension for the already constructed Ordrupgaard Museum, using only diagonal lines. 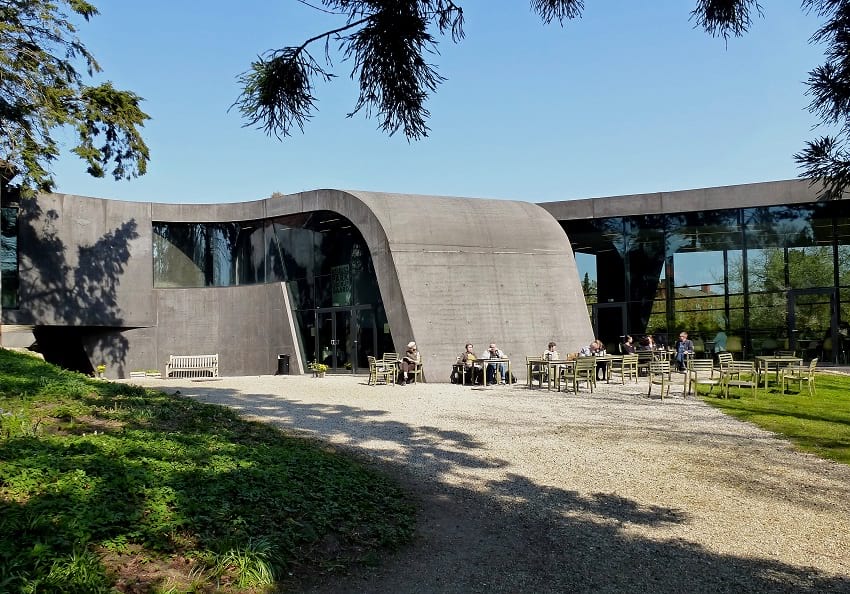 During the same years, she won a commission for designing the Administration building of BMW Motors in Leipzig, Germany. The interiors of the first floor, consisting of 30 rooms of the Hotel Puerta America in Madrid, Spain had brought her laurels.

By the late 2000s, Zaha Hadid had begun working on major reputed projects, some of which included the Salerno Maritime Terminal in Italy, the Napoli-Afragola High Speed Train Station in Naples, Italy, a unification of three government buildings including a multimedia library, a public archive and a sports department called Pierres Vives in Montpellier, France and Opera Houses in cities like Guangzhou in China and Dubai in UAE. She designed a private residence in Moscow for a Russian citizen – Vladislav Doronin – called the Capital Hill Residence, which happens to be the first and only private property Zaha ever worked on. In Glasgow, Scotland, she designed the Riverside Glasgow Museum of Transport, which is a striking structure of zigzag lines and patterns. 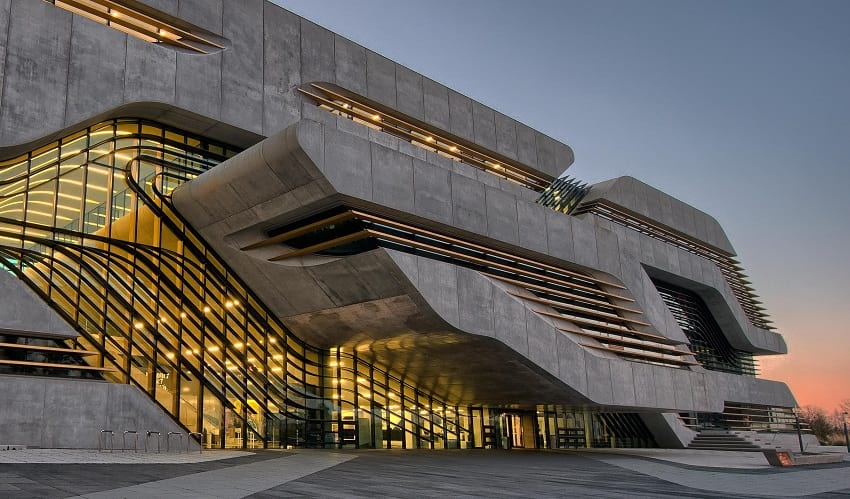 While her adopted home country was set to host the Summer Olympics in 2012, Zaha Hadid designed the Aquatics Centre, which became an icon in itself. Designed like the fluidity of water, in her own words, the London Aquatics Centre became the talk of the town, with even Olympic-winning swimmers praising her work. Zaha Hadid passed away in 2016 in Florida, USA, due to a sudden heart attack at the age of 65 and left some of her work unfinished. The work on Beijing Daxing International Airport in China, currently under construction was taken up by Zaha’s architectural firm, which will also be one of her several other posthumous projects. The Scorpion Tower or the One Thousand Museum in Miami, Florida, which is a residential high-rise condo, will also be completed by her firm post her death. The list also includes the Al Wakrah Stadium, now known as Al Janoub Stadium in Qatar, which will be the venue for the 2022 FIFA World Cup set to be held in the country. While there are a lot of awards that Zaha had won in her long and fruitful career, the high-ranking Pritzker Architecture Prize, which is the Nobel Prize equivalent in architectural parlance, was the one she cherished the most. She also became the first woman to receive the honour of the Pritzker Prize in 2004. Zaha also won the Royal Institute of British Architects (RIBA) European Awards in different years for her diverse construction designs that had been built the world over. For her peculiar projects and architectural designs, Zaha also received UK’s most esteemed architectural award – the Stirling Prize – in two different years. She also became the first and only woman to win the Royal Gold Medal by the RIBA in 2016. She was appointed the Commander of the Order of the British Empire (CBE) in 2002 and made a Dame Commander of the Order of the British Empire (DBE) in 2012 for her services in the field of architecture. Internet giant Google, too, celebrated her achievements with a doodle on its home page in 2017. Several other international awards from different countries were also bestowed upon her for her unrelenting and dedicated service in the field of structural design. 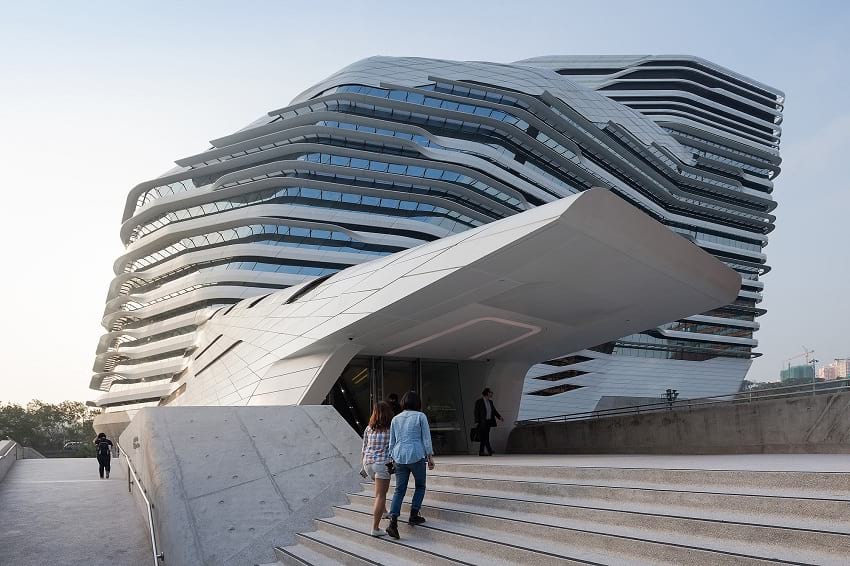 The dynamic Zaha Hadid became a name that had come to stay in the business. The kind of designs she created in architecture became synonymous with her ideas and it was difficult to push her aside. A woman standing tall like her architectural pieces in a male-dominated field, Zaha has left a huge shoe that will take a long time to be filled. Her work across the world will stand testimony to the fact that even after she passed away, her art will continue to be literally looked up on.

Enjoyed this article? Also, check out “Mae Jemison: The First African-American Woman in Space Had an Illustrious Career from Medicine to Cinema“.

Previous Article
Ancient Pyramids of Sudan from the Nubian Empire
Next Article
The Rock of Gibraltar: Guardians of the Strait of Gibraltar