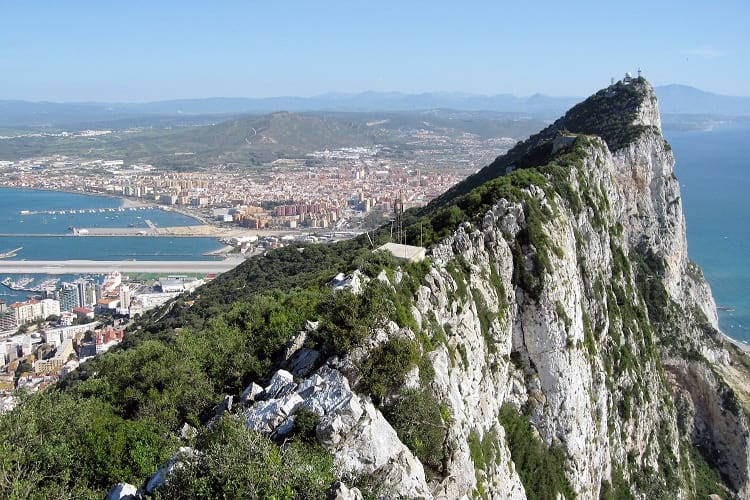 Throughout history, we have seen places where castles and forts have been built on raised masses of land and they are primarily called a promontory. One such monolithic limestone promontory is “The Rock of Gibraltar”. It is located in Gibraltar, a British Overseas Territory, near the south-western tip of Europe on the Iberian Peninsula. A nature reserve occupies most of the upper territory of the rock, which is home to approximately 300 Barbary Macaques, one of the best known Old-World monkey species.

What piques the interest of archaeologists is the age of the rock-Early Jurassic period but the underlying Dockyard Shale formation is of an unknown age which has kept geologists puzzled for decades. Standing tall at 426m, it also boasts of a cable car at the central peak called Signal Hill and several caves among which some are particularly well known such as St. Michael’s Cave.

In a referendum in 2000, 98%  of residents decided that the land of Gibraltar should remain British. While it is a big rock, it is crammed up in terms of living space and has a mere 30,000 population. 12% of the workforce is dedicated to the online gambling industry which is a booming business in Gibraltar. Moreover, to attract investors, the Chief Minister declared income tax policies that are unparalleled and provide a motive to the common businessman to move their business to Gibraltar. 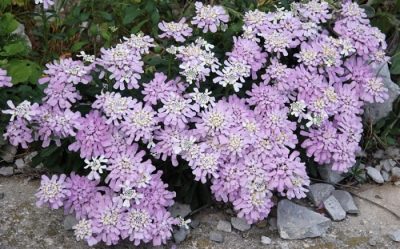 The Rock is a series of inaccessible cliffs which face the sea and layers of houses occupy the western side of the rock that stretches up to 300 feet. There is a scarcity of water bodies, due to which catchment areas have been made with Sandy Bays that help in rainwater harvesting. The weather is volatile, consisting of hot and humid summers which are rainless and mild winters with steady rain. Strong easterly winds are a normal occurrence over the rock. The vegetation around the rock is unique and comprises of approximately 500 flowering plants. Among these, there is a plant that is indigenous to the rock called the Gibraltar Candytuft. A bird called the Barbary Partridge is indigenous to Gibraltar, among many other common migratory birds that are found in the area.

History of the Rock of Gibraltar and its people

In 711 AD, a Muslim Commander named Tariq Ibn Ziyad claimed the land of Gibraltar and its successive occupants held it as a fortress. In 1462, Muslim rule was forcefully removed by the Spanish and Isabella I annexed Gibraltar to Spain in 1501. During the War of Spanish Succession, the British managed to capture Gibraltar under the leadership of Sir George Rooke and the Spanish eventually surrendered the Rock under The Treaty of Utrecht in 1713. In 1830, it was declared a British Crown Colony after which in 1869, the Suez Canal opened up which was an important route for the British colonies in East Africa and Southern Asia.

Gibraltar was a point of tension between the British and Spanish colonies which came to an end in 2002 after a referendum was passed in which the people of Gibraltar voted for it to be a British sovereign state. Later in 2004, the creation of Trilateral Forum of Dialogue brought together representatives from Spain, Gibraltar and Britain which eased the history of tension between the three. 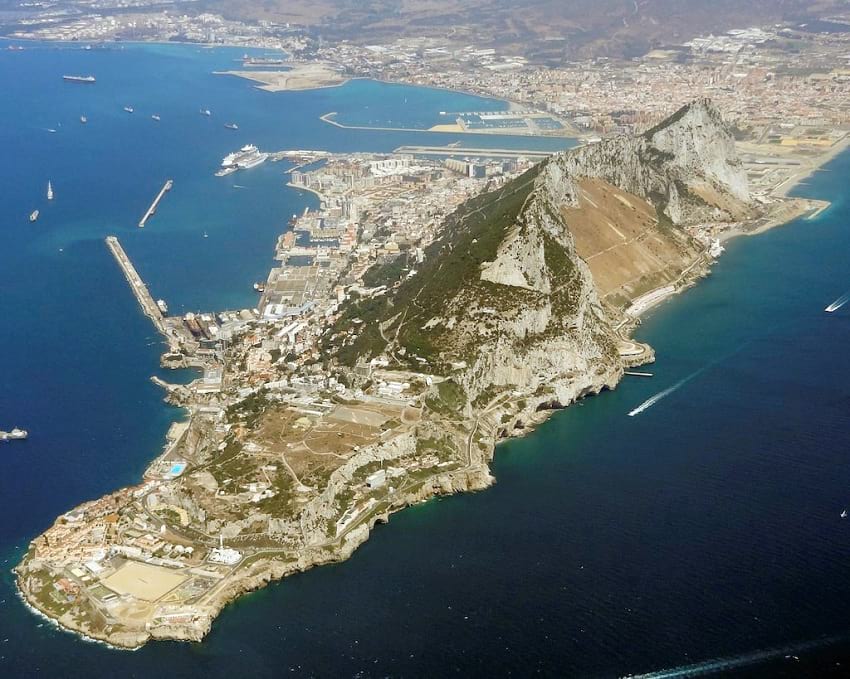 Aerial photo of the Rock of Gibraltar. (IamRender / Flickr)

People say, beauty always lies on the inside and it holds true for the Rock of Gibraltar. With a channel of tunnels that were used during World War II and what’s more, is that they were created during World War II itself using mere hand tools. About two centuries before the war, there was another network of tunnels called ‘The Great Siege Tunnels’ which were used by the French and Spanish as a stronghold. All of these attractions seem rudimentary when compared to St. Michael’s Cave. It is captivating at first glance and has been converted into an auditorium for tourists to see performances. There are two pillars that stand tall and protect the entrance to the Strait of Gibraltar- the Abila Mons and the Calpe Mons. The southern pillar, Abila Mons bears acute resemblance to two other pillars around the world, namely, Monte Hacho in Ceuta and Jebel Musa in Morocco. The Northern one, Calpe Mons, stands tall as the unique and famed ‘Rock of Gibraltar’. According to legend, Hercules is said to have used the rocks as pillars to succeed in completing one of his twelve labours, particularly the tenth in which he was required to bring Cattle of Geryon from the far west to Eurystheus which was the extent of his journey to the west.

Beyond the pillar, lay the lost city of Atlantis and according to Renaissance tradition, the Rock had engraved “Ne Plus Ultra “ which meant nothing further beyond. Sailors took this as a warning to not sail beyond this point as they were terrified of the unknown. While being a strategically important landmark, the Rock of Gibraltar has always been associated as a pillar of strength during wars. People have always and will be in awe of the sheer dominating presence of the Rock.

Neanderthals used to exist here up to 30,000 years ago, or so the scientists thought. According to some research conducted by a group of scientists, a cave located south-east of Gibraltar indicates that Neanderthals inhabited the place up to 24,000 years ago. Another interesting thing about the rock is the species of the monkeys that inhabit it – Barbary Macaques. They are small creatures, one of the Old-World monkey species that are very playful in nature.

The Gibraltar International Airport is a unique structure- with a runway owned by the military, but almost exclusively used by civilians travelling to or from Southern Spain. The runway of the airport is intersected by a very prominent road, the Winston Churchill Avenue, which must be blocked off every time an aircraft is taking off or landing. 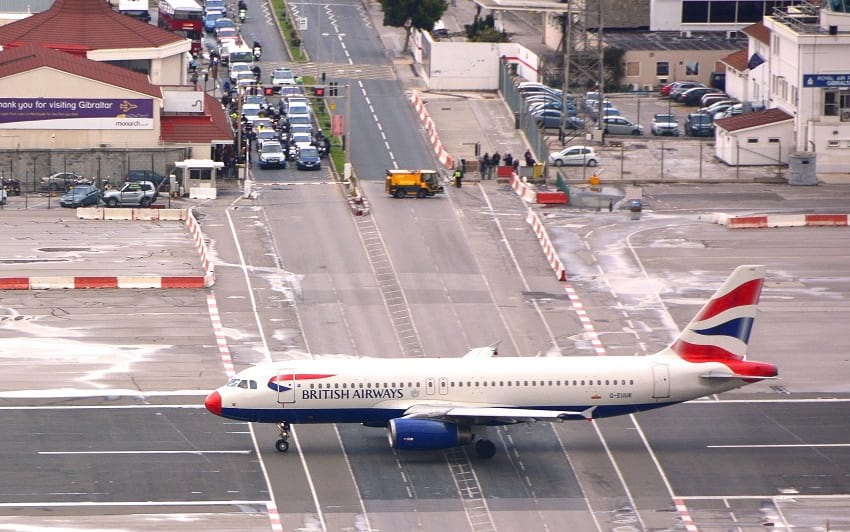 The Gibraltar International Airport counts as one of the most dangerous airports in the world, ranked 5th amongst ‘Extreme Airports’ by History TV. The powerful crosswinds around the Rock of Gibraltar and across the Bay region makes landing at this airport extremely difficult, especially during the winters. The airport runway was developed during the Second World War from a pre-existing race-course. The runway was extended with the help of rocks blasted from the Rock itself, thus reclaiming fallow land in the Bay region.

Vacations on the Rock

Several famous actors and musicians have also visited the Rock for a holiday with their loved ones and had quite a run in with the Macaques. While Actor Jason Biggs and his wife were teased by the monkeys, Rolling Stones’ lead guitarist Brian Jones played a little music for the monkeys to which they started swaying. In March 1969, John Lennon and Yoko Ono exchanged vows and got married at Gibraltar under registrar Cecil Wheeler.

Enjoyed this article? Also, check out “Ushuaia: The World’s Southernmost City, Where End is the Beginning“.

Previous Article
Zaha Hadid: The Prominently Leading Woman Architect Who Ruled the Roost in a Man’s World
Next Article
Wind in the Willows: The Singing Ringing Tree