Ancient Pyramids of Sudan from the Nubian Empire 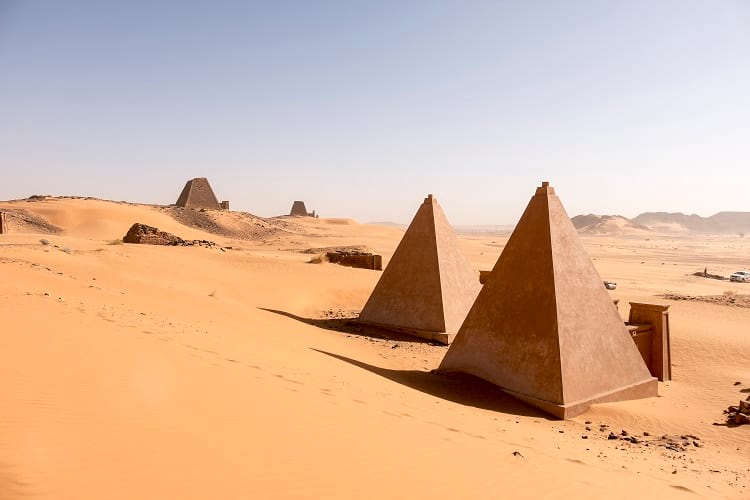 In modern Sudan, Africa lies the remnants of a powerful, ancient civilisation known as Nubia or the Nubian Empire. They are still represented in a series of pyramids known as the Nubian Pyramids of Sudan. Nubia is the oldest known civilization in Africa dating as far back as 2500 BC, home to several empires, the most famous of which being that of the Kingdom of Kush.

Another dominant civilisation in Africa – the Egyptian Empire – lasted for a longer time however and this is a major reason why less is known about the Nubians. There are not as many artefacts nor archaeological sites which have been uncovered. An example of this is in the famous pyramids in Egypt, for example the Great Pyramid of Giza. While Nubia have their own monuments they are not as famous nor as well visited as their neighbours. The Kingdom of Kush

Not to be mistaken with the mountains of Pakistan or Afghanistan, these pyramids are in the ancient city of Meroe, 200km from Khartoum, Sudan. Meroe was the capital of Kush at the time of the construction of the pyramids. They were able to flourish as a civilization especially in times when they were independent from Egypt’s rule and living in relative peace. Economy boomed when this was the case as the Nubians lived off the land and mined many different types of ore, most notably gold. It allowed them to oversee over 200 pyramids alongside palaces with grand, exuberant designs. A prominent feature of the Nubian way of life was their legendary female rulers. This was different to many male-driven, patriarchal societies of the time. It was common for these female rulers to be buried with their bow and arrows, along with intricate stone rings which helped when drawing back the bow.

Kush became so strong that it eventually turned the tables and conquered Egypt under a king called Piye, around 730 BCE. This would start Egypt’s 25th Dynasty of rulers and unlock the mystery of there being Black Pharaohs – as in the colour of their skin – which was shown in many artefacts and writings. This dynasty lasted between c. 770 – 656 BCE and King Piye would be entombed within one of the Nubian Pyramids as tradition dictated. Yet the dynasty was put to an end when assaulted by Assyrians and later Kush was driven into the southern lands to a city called Napata by the time the 26th Dynasty of Egypt occured.

The Pyramids of Sudan Aerial photo of the pyramids of Sudan. (B N Chagny / Wikimedia Commons)

Over 8,000 miles from the pyramids of Giza in Egypt stands another masterpiece of construction and architecture. Although a UNESCO World Heritage Site they are not so well known compared to other wonders of the world due to their geographical location mainly. The biggest pyramid of Giza is 756 feet while the tallest in Sudan are no more than 90 feet. There are over 350 pyramids in Sudan and most were built anywhere from 720-300 BCE to 350 ACE, over 2,000 years after the miracles in Egypt. The Nubians adopted many aspects of Egyptian life such as language and religion as well as the style of pyramids.

Nubia’s pyramids are different to the iconic ones of Egypt. They more resemble those built in the New Kingdom Period of Egypt (1539-1075 BCE) which was when the Nubians began to strongly assimilate Egyptian culture. The most famous ones are present at the ancient site of Meroe. Every pyramid has steps to the east which lead to the sealed entrances. This is different to the Egyptian temples where the doors face north but the reason why is still to be ascertained.

Egypt’s temples are almost perfectly aligned to the four cardinal points – North, South, East and West. There are several theories existing which believe the Egyptians used the sun and moon to do so, based on the Fall Equinox. This is where the sun lines with the Equator, with the length of day and night being the same for one day. It is not known the reasoning for the positioning of Nubia’s monuments but it is likely something more than meets the eye. Website Live Science explains the theory behind Giza’s positioning.

“The builders of the Great Pyramid of Khufu aligned the great monument to the cardinal points with an accuracy of better than four minutes of arc, or one-fifteenth of one degree,”

But as explained by Live Science, there are not any concrete explanations.

“The Egyptians, unfortunately, left us few clues. No engineering documents or architectural plans have been found that give technical explanations demonstrating how the ancient Egyptians aligned any of their temples or pyramids,”

Inside the sealed entrances are the riches of the deceased as well as the deceased themselves. They rest beneath the pyramids in sepulchral chambers some of which in mummified forms. Many have a wooden coffin with their face painted upon to let visitors in this realm or the next know who lies beneath. Sacrificed animals and slaves lay nearby to assist them in their passage to the afterlife as stated in Egyptian and Nubian religion. Their belongings such as the stone rings mentioned before are with them, many items from trade with the Greek Empire also exist showing that interspersion with Empires outside Africa was flourishing even at this time. Many quotes and images from a famous Egyptian funerary text called The Book of the Dead decorate the insides. Statues have been unearthed, most commonly that of Ba – a human head with the body of the bird who represents the human soul’s mobility after death. Outside, the exterior stones would be set in plaster and painted bright colours, plaster which has since worn away. 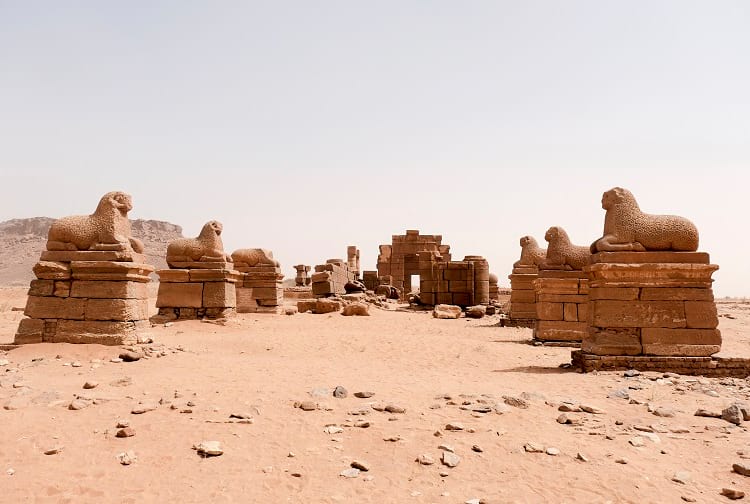 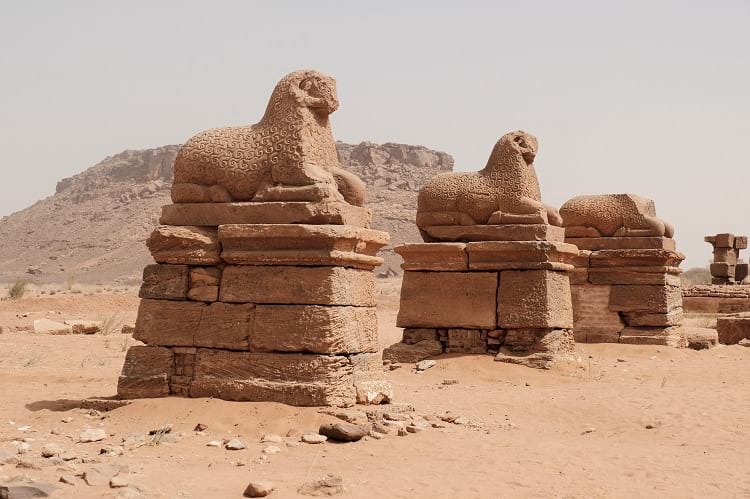 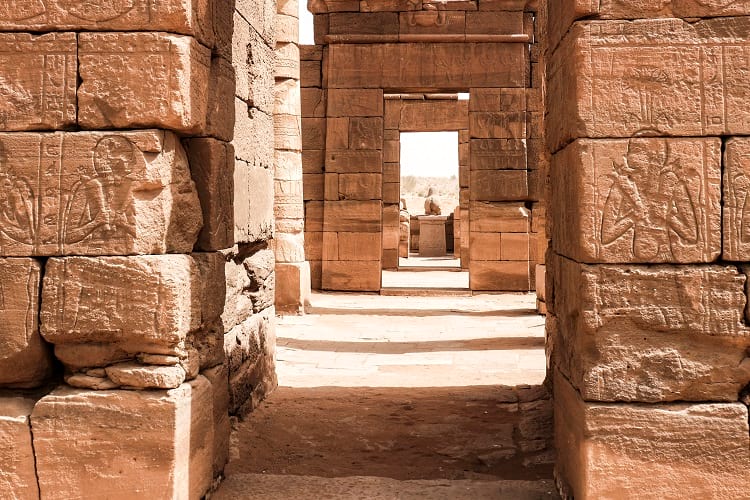 The ruins of Temple of Amun in Nubia. (Christopher Michel / Flickr)

The decline of Nubia

The Nubian Empire remained prevalent with the Kingdom of Kush until the infamous Queen Cleopatra’s death in 30 BC – the Queen who had dalliances with Emperors Julius Caesar and Mark Antony – as the Roman Empire took over. This mighty empire would suppress the Nubians as far south as Aswan, in southern Egypt. Meroe would become uninhabited by the 4th century AD but was brought to the attention of archaeologists when an Italian grave robber called Giuseppe Ferlini brought back some artefacts from his missions to steal gold from the tombs. During these raids, he inflicted a massive amount of damage in setting off explosives in 40 of the tombs to gain access. He believed it would not have a lasting effect on the potential historical data or perhaps he did it regardless. Much of his lout was sold to King Ludwig I of Bavaria, Germany; a procurer of riches.

Despite this destruction there is still a massive amount of history buried within the magnificent Nubian Pyramids of Sudan. While many of which are considered too dangerous to examine due to flood waters and fragile foundations, some organisations such as National Geographic have donated money to learn more, and continue to do so.

Below is a brief timeline by National Geographic on the Nubian culture from the period of the Meroe Pyramids.

8th Century B.C.
Construction of the south and west cemeteries [pyramids] begins in Meroë, then the second city of the Kingdom of Kush, whose capital was at Napata.

3rd Century B.C.
As space in Meroë’s south cemetery runs out, expansion begins in the north cemetery of the city’s growing necropolis.

250 B.C.
King Arakamani relocates the royal necropolis from near Napata to Meroë, which becomes the kingdom’s spiritual and political capital.

1st Century A.D.
Queen Amanirenas leads her troops against the Romans. Her successor, Amanishakheto, is buried with costly grave goods.

2nd Century A.D.
Building methods change. The Meroë pyramids are faced with brick instead of stone, and then a layer of plaster, which is painted.

A.D. 350
An invasion by the kingdom of Axum brings Meroë’s dominance to an end. The city and royal necropolis are eventually abandoned.

Enjoyed this article? Also, check out “Important New Discovery May Provide Insights into the Construction of the Pyramid of Giza“.

Previous Article
Pale Blue Dot: The Iconic Photograph Showing How Microscopic But Brilliant Earth Is
Next Article
Zaha Hadid: The Prominently Leading Woman Architect Who Ruled the Roost in a Man’s World