Voyager Golden Records: A Package for the Extraterrestrial from Planet Earth 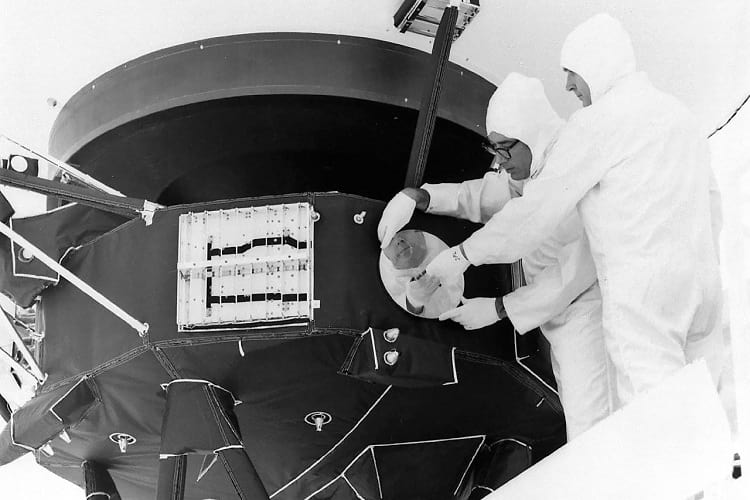 It would be a Red Letter Day if alien life is contacted. Motions have been set in place to make this happen but at the very dawn of space exploration it is thought to be hundreds of thousands of years from happening… if at all. 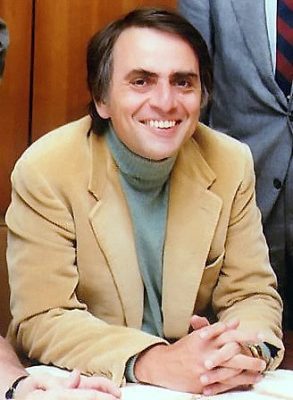 One such motion took place in 1977 when the Voyager Golden Records were launched into the cosmos, two vinyl records which are aboard two spacecraft which launched under the same name. Within the records is a variety of media based on the history of civilization including sounds and images. It is considered a Time Capsule in the sense that it is more likely that humans from the future rather than aliens will find them. Like a message in a bottle, Astronomer Carl Sagan explains it as sending a “…bottle into the cosmic ocean.”

The two spaceships are not destined for anywhere in particular but the most notable of stars – a Goldilocks zone – known as Gliese 445 will be passed in 40,000 years. Needless to say, it is a mission for the future.

Each record is encased in an aluminium casing with a cartridge to play it and a needle. Also, there are instructions on how to use it.

The two sides of the disc 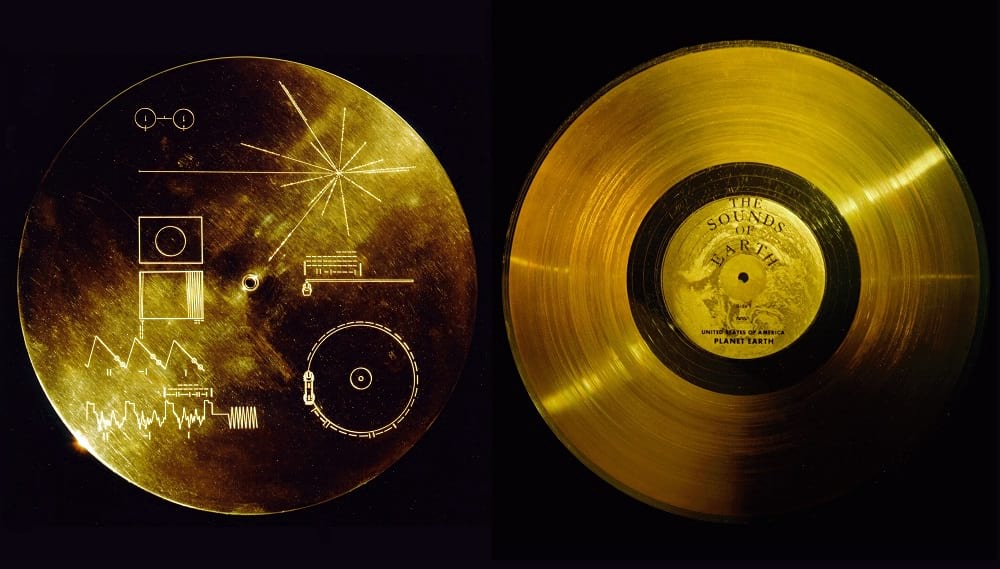 The Sounds of Earth Record Cover. (NASA on The Commons / Flickr)

• The two circles on the top left show states of the Hydrogen atom and the movement of the proton and electron.
• The Square below is to do with rendering. If the record is correctly rendered then this should match the first image.
• An image frame with vertical lines.
• Vertically staggered lines.
• A diagram illustrating how pictures are made. Showing video signals and binary codes.
• Binary arithmetic explaining how the record should be played.
• Overall play time of record.
• Pulsar map showing the location of our Sun and the frequency of some pulsars.

The information is very technical, related to the actual playing of the record which holds the majority of the content.

There is also a clock – in a sense – electroplated onto the cover of the record. An extremely clever clock built to last billions of years. It is the element Uranium-238 which has a radioactivity of 0.00026 microcuries to be precise. The Uranium will decay to half of its original radioactivity value in 4.5 billion years meaning this can show the time since launch. Because scientifically speaking, Uranium-238 has a half-life of 4.468 billion years.

However, the pulsar map should also be able to show this.

Within the record are images selected by a NASA committee. The aforementioned Carl Sagan chose 115 images in Analog form.

There are some beautiful and bizarre photos on the vinyl. All 116 are in this link.

Also, there are many sounds, music and greetings from fifty-five languages including 5 archaic languages. There is Akkadian, a dead language spoken in the Middle East about six thousand years ago and Wu, a modern Chinese dialect. Here is a translation to English of every greeting:

There are 90 minutes of music, Eastern and Western classics, as well as traditional songs from all corners of the world, are included. Here is a list of all of the music on the record:

A message from the US President at the time Jimmy Carter and UN Secretary are also included. The former President reads:

“This Voyager spacecraft was constructed by the United States of America. We are a community of 240 million human beings among the more than 4 billion who inhabit the planet Earth. We human beings are still divided into nation states, but these states are rapidly becoming a single global civilization.

We cast this message into the cosmos. It is likely to survive a billion years into our future, when our civilization is profoundly altered and the surface of the Earth may be vastly changed. Of the 200 billion stars in the Milky Way galaxy, some–perhaps many–may have inhabited planets and spacefaring civilizations. If one such civilization intercepts Voyager and can understand these recorded contents, here is our message:

This is a present from a small distant world, a token of our sounds, our science, our images, our music, our thoughts, and our feelings. We are attempting to survive our time so we may live into yours. We hope someday, having solved the problems we face, to join a community of galactic civilizations. This record represents our hope and our determination, and our good will in a vast and awesome universe.”

Already by 1990 the Voyagers had gone further than Pluto and ultimately outside our solar system. The mission is extremely romantic and symbolic in the sense that it is extremely hopeful that aliens will be able to decipher it. Even for them to even have the correct anatomy and perceptions to operate the device. At this stage it is perhaps better to view the Golden Records as a Time Capsule rather than an attempt of contacting (the) other life. The director of the project Carl Sagan admits that also. But who knows how the future will pan out.

Enjoyed this article? Also, check out “The Mysterious Wow! Signal: Aliens? A Comet? Or Just a Glitch?“.

Previous Article
What Happens to the Olympic Venues in the Host Countries After the Olympic Games End?
Next Article
The Extraordinary Journey of the Stone of Scone and the Imperial Coronation Chair