Pale Blue Dot: The Iconic Photograph Showing How Microscopic But Brilliant Earth Is

Ever gazed at a summer night sky, full of scattered moon dust, and wondered how they winked at us from the endless vault beyond the moon’s corona? They appear to us as luminescent dots all over the sky. Little do we realize, our vast microcosmic home, the planet Earth, simply appears as a tiny dot in the cosmos. The only distinguishing feature is that this one is a blue dot, rather, a pale blue dot.

13.8 billion years ago the Universe was created with a massive Big Bang, and over time Space itself has expanded. Gravitational forces have worked their magic, and the Universe has evolved into its present state. Our planet Earth is in the third position from the Sun, and together with her seven other siblings, forms the solar system. It is important to remember, our solar system is actually just one of the many solar systems in our Milky Way. And the Milky Way in turn, is just one of the innumerable galaxies in the Universe.  Astronomers and cosmologists have been on a quest to unravel the eternal mystery presented by Space, since time immemorial. With the advent of modern technology, humankind has made remarkable leaps of success in this regard.

Twenty-nine years ago, on 14th February 1990, Voyager 1 spacecraft clicked the first-ever picture of our solar system. Including Neptune, Uranus, Saturn, Jupiter, Earth and Venus, the spacecraft ended up clicking a “family portrait” while turning the spaceship towards the Earth. This was not at all pre-planned. There had been, in fact, a total of 60 frames that the Spaceship had tried to capture, the ‘Pale Blue Dot’ being one of them.

Unfortunately, Mars had little sunlight, Mercury was very close to the sun, and Pluto turned out too dim while the picture was taken. Consequently, they are not visible in the iconic photograph. The picture was taken from a distance of more than 4 billion miles from Earth, at about 32 degrees from the ecliptic. The Earth looks like a mere point of light due to the huge distance between the Planet and the Spaceship.

Coincidentally, Earth lies right at the centre of the scattered light rays, thus resulting from the intense sunlight and the dramatic effect overall. It is one of the most famous photographs of the Earth, although it just appears as a ‘pale blue dot’ that is moving. 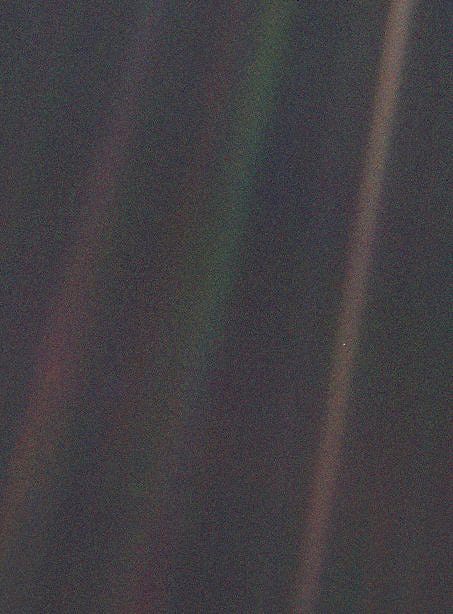 The National Aeronautics and Space Administration (NASA) launched Voyager 1, a 722 kg robotic spacecraft on a mission to go into outer space and explore it in, way back in 1977. Voyager 1 was the first spaceship that was able to provide comprehensive images of the two largest planets, (Jupiter and Saturn) and their major moons. This space shuttle is still loitering in the Universe, and it is the first man-made shuttle to leave the solar system and explore beyond. It still receives command and transmits back important data back to the NASA Deep Space Network. When the spacecraft encountered Saturn in 1980, Carl Sagan proposed the idea of the spaceship to take one last picture of the Earth. Although the photograph would not be of much worth to science due to the lack of proximity, it would be meaningful as a perspective on our home in the Universe.

From outer space, our planet Earth appears to be a blue due to the scattering of the Sunlight in its atmosphere. The wavelength of the blue colour is quite short and scatters to a great extent. This is the same reason why the sky appears blue when we look up from our planet as well! Another factor adding to the blueness of Earth is its huge oceans which also appear blue. From Space, the colour of the planet appears like a ‘pale blue dot’, as opposed to a dark blue one owing to the white light reflected by the clouds combining with the scattered blue light.

The sensation that this picture created is both unusual and difficult to put into words. A book named ‘Pale Blue Dot: A Vision of the Human Future in Space’ was written by Carl Sagan in 1994. In it, he says,

“Look again at the dot. That’s here. That’s home. On it everyone you love, everyone you know, everyone you heard of, every human being who ever was lived out their lives. Every aggregate of our joy and suffering is, thousands of confident religions, ideologies and economic doctrines, every Hero and coward, every creator and destroyer of civilization, every mother, father, hopeful child, inventor and explorer, every teacher of morals, every corrupt politician, every saint and sinner in the history of our species lived here—on a mote of dust suspended in a sunbeam.”

The image of the pale blue dot gives us a perspective of just how insignificant our lives on Earth are when compared to the vast majestic spread of the Cosmos. We think we are very safe here, in our big blue planet, but it is not so. The mundane things of life, ideologies like racism, sexism, imperialism, war and even emotional turmoil are just petty things. They are just momentary glorification of a fraction of a dot. Everything will collapse into ashes if there is a slight distraction in the orbital path of any large heavenly body, and it collides with us. Yet, living in this distinct planet that benefits us with all its wonderful resources, we are misusing them for our trivial interests. It is the only planet known so far to harbour life, and there is no other place for us to set up base in the near future. It is for our own good that we should learn to take care of this place and to think in a wider spectrum.

This underscores our responsibility to deal with each other with more humanity and to preserve our species and our homeland. It is this planet that we call our ‘Home’, which maybe is a mere ‘pale blue dot’ somewhere in the extragalactic nebula, but it is our only home which is long waiting to be cherished.

Enjoyed this article? Also, check out “Gliese 581g: A Habitable Exoplanet or Just Another Celestial Object Orbiting a Star?“

Recommended Read:
Pale Blue Dot: A Vision of the Human Future in Space |  By Carl Sagan

Previous Article
Akodessawa Fetish Market: The Creepiest Voodoo Market in the World
Next Article
Ancient Pyramids of Sudan from the Nubian Empire