The Mysterious Wow! Signal: Aliens? A Comet? Or Just a Glitch? 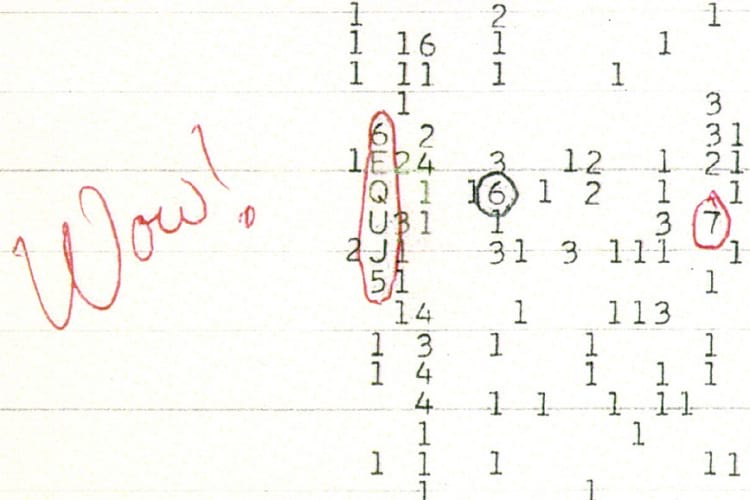 Volunteer astronomer Jerry R. Ehman was going through the recorded data of the Ohio State University‘s radio telescope, Big Ear and discovered a 72-second irregularity in the charts. Big Ear was being used to detect possible signals from intelligent life in outer space, and on August 15, 1977, it received a very strong signal from outer space, that lasted for a good 72 seconds.

Ehman was startled at this discovery and wrote “Wow!” in red on the printout, after encircling the reading. Pretty much the first word that any of us would say after knowing that there is probable proof of intelligent life beyond Earth. Needless to say, the signal since then has been called the Wow! Signal.

Big Ear observatory relied on the Earth’s rotation to scan the skies. Estimations were made keeping in mind the speed of rotation of the Earth and the spatial width of the telescope, Big Ear was able to observe a given point for 72 seconds only.

Any constant extraterrestrial signal in such a case could be recorded for not more than 72 seconds, with the signal increasing gradually for 36 seconds as the telescope approached the point. The intensity would be at its peak, marking the centre of the observation window and then, start dropping as the telescope moved away from the point.

That is exactly what was depicted in the recording of the Wow! Signal. The signal was a narrowband continuous radio signal with no break in modulation and had supporting data to prove that it indeed came from interstellar space. The source of the signal was narrowed down to a space in the constellation Sagittarius, south of the 3-star cluster called Chi Sagittarii.

SETI was established in the early 1900s for collective scientific study and search for extraterrestrial intelligent life in outer space. It was conducted by examining the electromagnetic radiations from other planets and stars for any signs of communication.

With the arrival of radio, it was believed that the radio could be used to contact Martians after Guglielmo Marconi declared that his radio had been able to detect signals from Mars which could be a possible message.

August 21 to 23 in 1924, Mars was closest to Earth and visible almost all night. During those 3 days, the United States embarked on a programme to detect and decode any potential Martian communication.

In March 1995, American physicist, John Daniel Kraus explained an idea of how the universe could be searched for any emitted radio signals. This was published in the issue of a popular American science magazine, Scientific American.

According to Kraus, this could be achieved by using a flat-plane radio telescope with a parabolic reflector. His concept was approved within 2 years and went underway with construction by the Ohio State University on a 20-acre plot in Delaware, Ohio. This Ohio State University radio observatory telescope named ‘Big Ear‘ started operating by 1963 and on August 15, 1977, was instrumental in the major breakthrough by Ehman.

Waiting for the recurrence of the signal

Ehman and several other astronomers tried to search for another emission from the same location using Big Ear but were unsuccessful in doing so.

The curiosity of the scientists in the Soviet was piqued during 1960s leading to innumerable searches for picking up radio signals from space. In 1962, a ground-breaking book on SETI, ‘Universe, Life, Intelligence’, by Iosif Shklovsky, a Soviet astronomer formed the basis for an expanded explanation in American astronomer Carl Sagan’s book, ‘Intelligent Life in the Universe‘ in 1966.

American astronomer Robert H. Gray tried to look for the Wow! Signal with the META array of Oak Ridge Observatory in 1987 and 1989, but was unable to find it.

In July 1995, American scientist and SETI League Executive Director H. Paul Shuch scanned the coordinates which were the origin of the Wow! Signal, with a 12-metre radio telescope in Green Bank, West Virginia, but to no avail. Robert H. Gray attempted yet again to search for the signal in 1995 and 1996, using the radically sensitive Very Large Array. The Wow! Signal or anything like it could not be found again.

Astronomer Professor Antonio Paris of St. Petersburg College in Florida, was taken in by the Wow! Signal phenomena and wanted to come to a conclusion. The more he thought about the source of the signal, the more it came to him that probably the signal was emitted from a comet or an asteroid. He started going through the archives to find all possible comets that had not been discovered in 1977 but may have been in the surrounding area of the constellation Sagittarius.

He published his findings in January 2016 in the Journal of the Washington Academy of Sciences. According to him, Comet 266P/Christensen that was discovered in 2006 and Comet P/2008 Y Gibbs discovered in 2008, were somewhere within the constellation Sagittarius in August 1977. Paris stated that comets, sometimes, give out radio waves from the gases surrounding them.

Paris used a radio telescope to check the radio signals emitted from comets and found these to be at 1,420 MHz frequency, the frequency of the Wow! Signal.

On 25 January 2017, radio telescopes were positioned towards the area of the sky where the Wow! Signal had come from, as Comet 266P/Christensen was to pass through the area again. The comet however, went above the Wow! Signal location by 2 degrees.

Previous Article
Allahabad to Prayagraj: A Journey of a Historical City into the Modern Times
Next Article
Secretariat Horse: Legendary Equine with Large Heart Gene that Thundered Down the Race Track