Gliese 581g: A Habitable Exoplanet or Just Another Celestial Object Orbiting a Star? Artistic rendering of Gliese 581c discovered before Gliese 581g which was also regarded as a potentially habitable planet in 2007. (Kobol / Celestia)

Recently, a probe has been sent in space that will, for the first time, get a closer look at the Sun’s surface and bring back information related to the massive ball of fire. Anything space-related immediately becomes a hot topic of discussion back on our planet, yet it happens to be one of the most intriguing subjects.

After space explorers discovered the presence of water beneath the surface of Mars a couple of weeks ago, this was not the first time humans found a potential source of life on another planet outside our solar system. However, newer claims could not be completely confirmed and the more-than-a-decade-old discussion of a habitable extrasolar planet might only be a case of wishful thinking.

Ten years ago in 2008, a group of researchers and astrophysicists at the University of California and Carnegie Institution of Washington together came up with an astonishing discovery outside our planetary system. Weighing about three times more than the Earth and falling into a habitable zone, a planet was located approximately 20 light-years away that could possibly sustain life just like the Earth can.

Orbiting a dim red dwarf star, the planet was named “Gliese 581g” or Zarmina (named after the lead discoverer’s wife) by the researchers. The solar system named Gliese 581 is made up of a lesser hot (as compared to the Sun) star, around which four or more planets, including Gliese 581g circle in a gravitationally-locked position.

The lead astronomer Dr. Steven Scott Vogt and co-researcher R. Paul Butler theorized the presence of habitable conditions on Zarmina for more than a decade, which came as good news to many. By the year 2012, more researches confirmed its existing status, but observations and reanalysis put its existence in jeopardy once again in 2014. Now, as recently as 2015, when Dr. Steven Vogt presented some more substantial findings, a consensus was reached that the new planet could still exist in another solar system.

Lying right in the middle of its planetary system, Zarmina has a rocky surface, beneath which there could be the presence of streams of water. It has a dense atmosphere, which could make it possible for life to sustain in hospitable conditions. As per Dr. Vogt’s research findings, the idea of human habitation on Zarmina is too far-fetched for now, but if the planet is potentially habitable, liquid water could possibly be the source of supporting life on its surface. 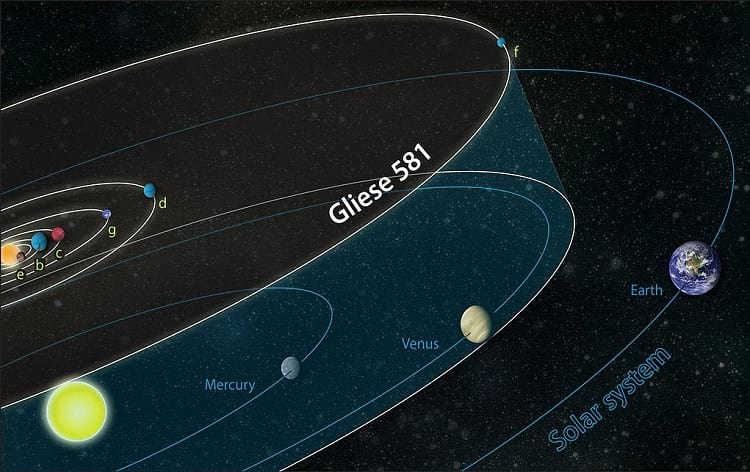 Gliese 581g has temperatures ranging between minus 24 degrees Celsius to 10 degrees Celsius, which is not too hot and not too cold as far as harbouring life matters. The exoplanet orbits its star in a nearly-circular motion in around 37 days and is in a gravitationally-locked position with its parent star. It can be best described as people seeing only one side of the Moon from Earth from any part of the world, while the far side always remains in the dark.

Its surface gravity is 1.1g as compared to the Earth’s, which is 1.7g. Since its parent star is a lot cooler than our Sun, the planets in Gliese 581 are clustered closely together to obtain energy and warmth, so that water can be maintained in its liquid state on its surface.

Doubts over its existence

While researchers from Washington and California were quite positive about their results, which they had gathered from the HIRES or High-Resolution Echelle Spectrometer – an astronomical observatory in Hawaii; research team led by Dr. Michael Mayor of Geneva Observatory maintained that their extensive study did not detect any such exoplanet and thus cast a long shadow of doubt on Gliese 581g’s existence.

Another astronomer Francesco Pepe, who worked on The HARPS or High Accuracy Radial velocity Planet Searcher situated in Chile, came up with 6 years of research, which contradicted with Dr. Vogt’s findings, thus questioning his claims of a potentially hospitable extrasolar planet in the already long list. Also, Dr. Mayor suggested that they could only collect data material on planets Gliese 581a, b, c, d and e on their systems, and the proof of Gliese 581g’s existence could never be gathered, thus brushing aside his discovery.

The number of Dr. Vogt’s non-supporters only kept increasing, with many of them presenting their own facts, opposing the lead scientist. A former student of Dr. Vogt, Artie P. Hatzes, currently associated with Thuringia State Observatory in Germany, challenged his mentor’s research, yet had his own doubts. He stated that based on his own findings, there may or may not be a Gliese 581g in the first place, which makes the theory of its habitability almost uncertain.

Another researcher, Rene Andrea from the Max Planck Institute of Astronomy in Germany, also raised questions over Dr. Vogt’s study, stating that when his team ran simulations, they found that Dr. Vogt’s team had incorrectly drawn conclusions regarding Gliese 581g’s circular orbit.

Philip Gregory from the University of British Columbia submitted his papers that hinted at the new solar system having only four planets and ruled out Gliese 581g’s existence altogether. His team also wound up their research mentioning that Gliese 581g may not be a real planet after all.

A postdoctoral research student at Penn State University, Paul Robertson also disregarded Dr. Vogt’s study stating that the presence of Gliese 581g was based on the orbital activity of 581d. He also stated that sunspots sometimes act like planetary signals and that could have altered Dr. Vogt’s findings.

While Dr. Steven Vogt kept defending his celestial investigation, with media and other researchers holding on to the hopes highly, the fate of Gliese 581g, gaining status of a habitable world, is yet to be sealed.

Researchers are keeping a close watch on the skies as more information keeps coming in regarding the newly-found planet, the existence of which has become a matter of dispute. There is still so much to explore in the deep outer space and it is only a matter of time before we get to know whether Gliese 581g makes the cut in the hospitable exoplanet list or not.

Enjoyed this article? Also, check out “ʻOumuamua: A Mysterious Interstellar Rock Discovered in Our Solar System“.

Previous Article
Mowgli was Real: Dina Sanichar, the Indian Boy Raised by Wolves
Next Article
The Amusing Tale of Sinbad – The Sailor Dog