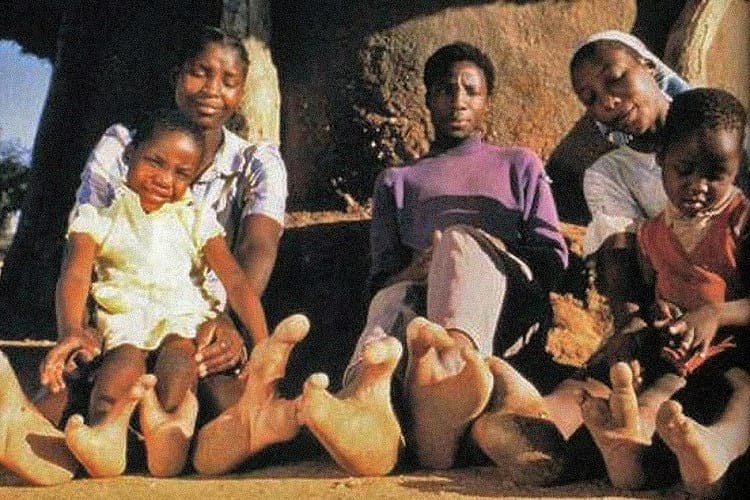 A family belonging to the Vadoma tribe displaying their feet. (Thfk / Wikimedia Commons)

The vaDoma people, also known as the Bantwana tribe, live in the Kanyemba region of Northern Zimbabwe. The region is located around the basin of the Mwazamutunda River. They speak in the Dema language, which is very similar to another dominant language of the region and hence easily discernable.

The tribe is very famous for their ostrich-foot syndrome, which is more scientifically known as ectrodactyly. It’s a genetic defect in which the middle 3 toes of a person are absent, and the remaining two toes at the outer edges are turned in. This condition allows them to walk but with some difficulty, whereas it’s extremely difficult for them to run. The condition, however, helps them to climb trees. This is especially useful since they follow a traditional hunter-gatherer way of living, similar to the San People living in Tsholotsho Area in Zimbabwe. They also can’t wear shoes on their feet. 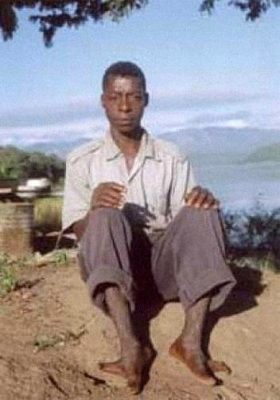 A member of the Vadoma tribe. (Thfk / Wikimedia Commons)

The vaDoma are the only traditional hunter-gatherers who still have ectrodactyly existing among the tribe through genetic inheritance. Since they mostly remain isolated and are only allowed to marry within their community, the condition exists only within a small portion of their community. However, it is noticed that the ectrodactyly people within vaDoma community are not looked down on, and are not handicapped. They are accepted by members of their community and remain well-integrated into the tribe.

The vaDoma people live under the chieftainship of Chief Chapoto, who lives in the mountains surviving primarily on a nomadic lifestyle of hunting, fishing, honey hunting, and gathering wild fruits and roots. Even though they may call their lifestyle that of hunting, recent change of definitions means that their lifestyle actually consists of poaching and not hunting since they don’t have a license to hunt. Due to this, the vaDoma people have been threatened and largely criticized. They also have little access to fertile land because of their own resistance, and they are now Zimbabwe’s only non-agricultural society, with stereotypes naming them ‘stone age cave-dwellers’. Due to this, a lot in the community have abandoned their hunter-gatherer lifestyle.

VaDoma people are quite shy by nature; while talking they don’t look you straight in the eye, and instead, stare at the ground. They are also often harassed by game rangers and hence run away from people. They also don’t like wearing textile fabrics; in fact, children as young as 10 years old don’t wear any clothing. They have kept little contact with the rest of their community, and have changed their lifestyle to semi-foragers. To protect themselves from the weather and predators, they have built houses on wooden platforms and have shelters with thatching.

Future of the vaDoma

There are also many folk tales that exist among the tribe regarding their ostrich feet. One such mythology says that their ancestors emerged from a Baobab tree, and as soon as they emerged they were walking upright and immediately moved on to their routine of hunting and gathering fruits of the land. The elders of the community also believe that their ancestors were like birds that came from the stars. Apparently, they mixed their DNA with women on Earth and the resulting offspring were the vaDoma people. There are also some persistent rumors that the vaDoma people are capable of disappearing in the forest and performing magic. There is a primary and secondary school, and a clinic provided for the Doma, but their intense trust in their own ways of life has prevented from using these facilities. In fact, the land that they live on is also very rich and can be used for farming, but only if they learnt to use the right skills and equipment. Due to their dislike for change, their future seems bleak.

Enjoyed this article? Also, check out “The Extraordinary Case of Wang the Human Unicorn“.