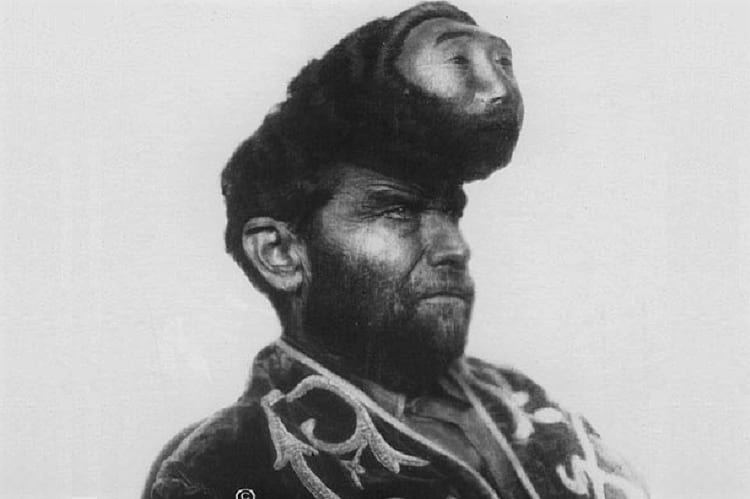 Albert Einstein said God does not play dice. Even if some creations of nature seem odd and dicey. Call it congenital abnormality, or a freak of nature, it happens in all life forms, plants and animals. It may vary from six fingers in human beings to as extreme as two full bodies joined together to varying extents. Having two heads also falls in this category even as chances of this happening are just about 5 in 10 million.

Pasqual Pinon, the two headed-Mexican was born in the year 1889. He was a railroad worker from Texas. Technically speaking, he did not have two biological heads. It wasn’t a case of Craniopagus Parasiticus, the genetic `two-heads’. What seemed like a second head on top of the ‘main’ was actually a cancerous growth, a tumour.

The promoter of a circus show saw opportunity in Pinon’s bizarre look and inducted him into his circus team in the year 1917. An artificially created face (from silver as per some reports) was surgically planted on the overhead tumour for a realistic two- heads appearance. This configuration served well for mass entertainment in Sells-Floto circus. Pasqual Pinon performed in the circus for several years before returning to Texas once again to retire.

Another case of the two-head syndrome was born in a poor family of village Mundul Gait in Bengal state of India in May 1783. So horrified was the midwife on seeing the freak arrival that she flung it into burning fire. Scalded baby though was rescued by his parents who thought child’s malevolent look could earn them a living. They were right. The child was a crowd puller in Calcutta. His fame spread far and wide. But he died of a snake bite when he was just 4 years old. His skull is displayed in Hunterian Museum of Royal College of Surgeons of London.

The twin heads of the Bengal boy shared little functional similarities though structurally they were similar and situated one above the other. Second head had ill-developed eyes and ears, and a stump in place of a scalp. Emotions of the first face didn’t reflect on second but the two shared a gastronomic relationship. When the main head was eating, the second showed signs of being ready to receive food. Their sleep cycles were different. When the boy slept, the second head was awake.

A recent case of two-headed man was from China, Chang Tzu Ping. He was noticed worldwide when he moved to the US to have his other face removed. In this case, the auxiliary face was situated on the right chin and showed lip sync with a primary face.

How does this occur?

Organisms with twin heads are called bicephalic or dicephalic.  Three-headed and multi-headed forms are also found in nature. This condition, in general, is called Polycephaly.

Duplication of an organ is a phenomenon with improper reading or execution of gene codes. Genes are the rulebook that describes how the new life ought to be constructed at the embryonic stage. The rulebook is ‘read’ by the Transcription Factors (TF’s) of the embryonic cells and instructions therein are carried out for building up of specific proteins.

TF’s are of 2 types: Activators and Repressors. The coordinated and opposite activity of these 2 ensures that gene instructions are followed with absolute precision. In a situation of TFs not collating and coordinating ideally, an order for one organ may get corrupted for multiple organs (activator unchecked by repressor), leading to two or more heads in newborn.

Einstein’s dictum can’t be negated. God indeed never plays dice. It is just that things go cogently wrong somewhere in the intricate and highly complex web of life. Otherwise, nature is forever working for the ultimate welfare of life and environment.

Enjoyed this article? Also, check out “The Extraordinary Case of Wang the Human Unicorn“.

Previous Article
Now Forgotten Medical Histories of Railway Surgery
Next Article
Dole Air Race: The Daring and Pioneering Conquest Across the Pacific Ending in a Tragedy