Stanford Torus & Bernal Sphere: Model Space Colonies for Mankind to Set up Base in Space

A NASA backed study that took place in 1975 gave rise to two space colony form factors- the Bernal Sphere, and the O’Neill Cylinders. A third concept also arose from the same study which was an amalgamation of the first two space colonies to form a doughnut-shaped ring in structure. This concept is known as Stanford Torus, which derives its name from Stanford University where the research was conducted during the 1975 NASA Summer Study. “Torus” in Greek or Latin stands for ‘doughnut’ or ‘bagel’.

A background to space colonization

In 1869, Edward Everett Hale wrote and published “The Brick Moon”, a story about a satellite made of bricks which are sent into space. Though it exists only for navigation reasons, it actually accidentally brings people aboard. After several trials and tribulations, the characters realize that they were in a space station. This was one of the earliest depictions of space travel and a space colony. Space travel has captured our imagination since the dawn of our civilization. From wanting to visit the mighty Gods who ‘live in the heavens’, to the modern desire to go to the moon, it has always been a significant part of literature. But space colonization, in itself, is a very modern concept.

Authors like Robert A. Heinlein and Issac Asimov, and scientists such as Carl Sagan, have all advocated for a unified effort to conquer the stars. Much of the modern idea of space colonialism was first postulated and then published in the year 1975. Stanford University and NASA Space Camp did collaborative research, speculating the future of Space Stations as postulated in Space Settlements: A Design Study. Over nineteen professors across various fields and a few student-volunteers got together for a 10-week program to construct a fairly accurate picture of how humans can, on a large scale, establish their habitat in space.

Proposed by NASA, The Stanford Torus is a doughnut-shaped ring that is one mile in diameter and is designed to house over 10,000 people in space. It is designed to be a self-sufficient colony, completely capable of producing food, support manufacturing and enable residential capabilities akin to that on Earth.

The Stanford Torus would rotate at the speed of 1 revolution per minute just to produce a weak artificial gravity. It would require a highly reflective mirror, angled at 45 degrees, to provide sunlight to generate electricity and for agriculture. The estimated energy requirements have been calculated to be as high as 18 kW per person.

Manufacturing the Torus would be a challenge in itself. Since the mass would probably weigh over 10 million tonnes, how would one expect to extract that amount of materials from Earth? The answer is simple: the moon. Futurists predict that the materials would be extracted from our moon, considering that the moon is rich in materials such as aluminium. They also suggested that humans could also smelt those materials through the power of the sun, i.e. solar furnaces. This is a viable option since the sun would be a simple, efficient and nearly limitless source of fuel.

The colony would also need to generate a lot of heat. To provide for that, radiators as large as 900,000m2 would be installed, to generate heat as hot as 280 K. The ring is also connected to a hub via a number of “spokes”, which serve as conduits for people and materials travelling to the hub.

The interior space of the Torus would be used for residential areas, shaped into large “Valleys” having Earth-like features. The Torus would probably look like a long and narrow glacial valley with its residential complex resembling “a bustling suburb”.

The Bernal Sphere was first proposed by an Irish scientist named John Desmond Bernal, through his book ‘The World, the Flesh, & the Devil’ in 1929. There he talks about the future of humankind and its future habitat in space. In his original design, he had imagined a non-rotating shell, 16 km in diameter, capable of holding a population of around 20,000-30,000 people. 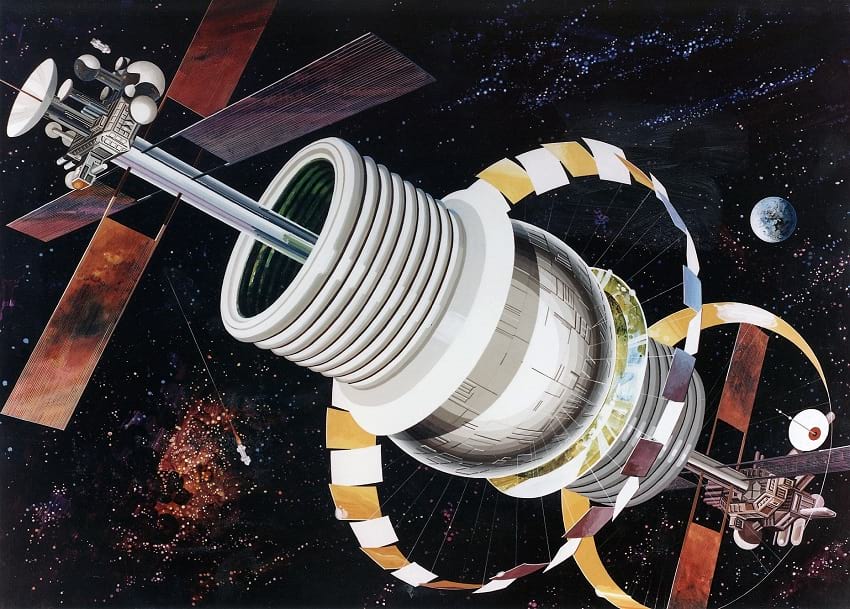 The internal view of a Bernal sphere. (Rick Guidice / NASA)

However, the modern conception of the Bernal Sphere comes from Gerard K. O’Neill (who was the technical director in the Stanford-NASA collaboration camp). O’Neill had further expanded on the hypothetical settlement, originally conceived by Bernard, in his book “The High Frontier: Human Colonies in Space”.

–Island One: In its first incarnation, Island One, the diameter was decreased to 500m and the shell rotated at 1.6 RPM to produce complete artificial gravity. O’Neill also envisioned that his structure would support populations up to 10,000 people and would have a dedicated agriculture section called “the Crystal Palace”. Like the Torus, it would also use external mirrors to reflect sunlight for both electricity and farming. O’ Neill’s choice of the sphere was aimed towards resolving air pressure and radiation-related issues.

–Island Two: A larger incarnation, Island Two, was to have a spherical diameter over 1.8 km. This Island is, however, designed as a manufacturing space: emphasising less on housing and more on industrial production.

Can space colonies soon be our reality?

There are a lot of problems with the design of either of the two settlements, the Stanford Torus and the Bernal Sphere. The first drawback is the energy requirements. We certainly cannot use exhaustible forms of energy such as fossil fuels as a primary source of energy for these projects. At the same time, secondary renewable sources of energy, such as solar energy, have very low efficiency (as low as 22%). There is also a larger problem: most of the materials involved are required in humongous quantities, and would be impossible to extract from Earth, itself. Even with suggestions such as extracting materials from Mars or Saturn’s moons, the sheer costs of transportation itself would be backbreaking.

One of the potential solutions to this problem is to invest in Green Energy as much as possible. Improving technologies such as solar energy would help us in the long run. Renewable resources could be a really reliable source of energy in the vast emptiness of space.

STEP 2: “Possible, but not really sustainable in the long run”

The reality of space travel and habitation, however, depends on the economics of the future. If history is the true predictor of the future, then the possibilities are not that far off the mark.

Previous Article
The Superstition Mountains and the Legend of the Lost Dutchman’s Gold Mine
Next Article
Light Pillars, an Insight into Nature’s Spectacular Optical Phenomenon