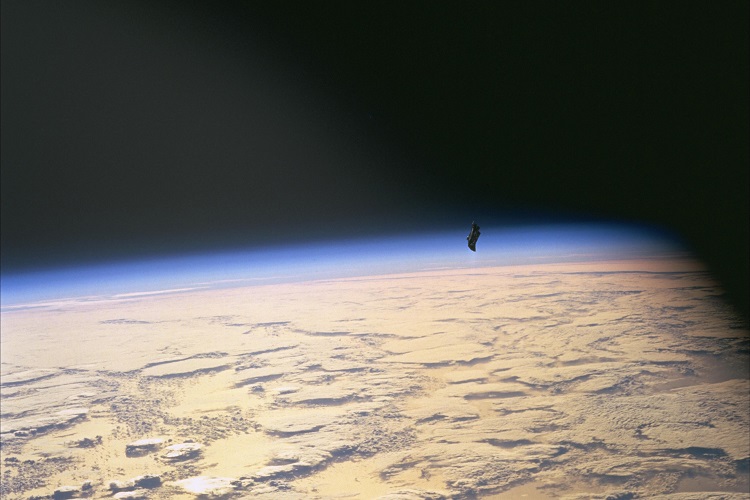 Developed in the year 1899, the Black Knight Conspiracy theory is something that has taken everyone aback with its mystery game. If the alien technologies and source materials are to be believed, this theory stands perfectly true.

Discovered by Tesla, the Black Knight satellite is an unidentified object captured on camera by NASA astronauts. The theory states that the satellite is around 13000 years old and is orbiting the earth surface in the adjacent polar orbit. The first instance of its origin can be dated back to 1899 when Nikola Tesla performed some radio experiments.

However, in 1954, once again a UFO researcher named Donald Keyhoe reported that two satellites have been traced to be revolving around the earth’s surface (the first man-made satellite was launched only in 1957).  In 1998, a space debris was photographed by NASA which appeared to be the same unidentified satellite. With so many speculations being rife about this conspiracy theory, you certainly might be curious to reach the truth. Here are all the facts we know about this theory.

In the year 1901, Nikola Tesla talked about his experiments with electric current. He stated that while carrying out those experiments, he encountered some interferences in electric signals. He further concluded that these disturbances could be from an extraterrestrial source for establishing a communication.

After this incident, again a radio operator from Norway named Jorgen Hals detected long delayed echoes. However, the radio operator was unsure about the cause and reason of these echoes. If some theories are to be believed, these echoes were the same as discovered by Tesla.

During the Black Satellite appearance, the discoverer of Pluto, Clyde Tombaugh was at the University of New Mexico along with Lincoln Lapaz. Both of them were doing research on few unexplained phenomena and credibility of alien satellites. Though the discoverer denied any reports of seeing the Black Knight Satellite, his statement was reportedly quite cryptic.

Was it a Bracewell probe?

Both Tesla and Hals talked about signals which were supposedly coming from an intelligent source in space. In the year 1960, another theory was bought into the picture by Ronald Bracewell. Bracewell said that in order to establish a communication with earth, other life would likely feed a satellite with all the necessary information and then launch it into space.

Such probes should be capable of covering larger distances and hence can reach the planet it has been trying to communicate. If the facts are linked to each other, these transmissions could be the same as that discovered by Tesla and Hals.

In February 1960, newspapers and magazines got flooded with yet another report of an anonymous satellite which was detected by the US military troop with unknown origin.

The popular TIME magazine came up with a news that the object was merely a retrorocket from a previously launched satellite. The year 1963 started with new claims about the satellite, astronaut Gordon Cooper saw a UFO cross the sky while he was orbiting Earth. Later, such reports continued to entangle the mystery of Black Knight satellite.

In the year 1974, Duncan Lunan, a Scottish science fiction writer claimed that LDE (long-delayed echoes) heard by Hals was from a star system Epsilon Boots. However, the only issue with this claim was that one of the stars from the Bootes constellation was said to be in the wrong place. He further claimed that the probe was nearly 13,000 years old.

Though most of the evidence of black Knight Satellite has been dated back to the early 90’s. There has been a recent evidence from 1998 where the crew members of space shuttle named Endeavour captured an unusual object moving along the lower orbit of the earth.

These snapshots are considered as the most valid proof of the satellite presence. However, on the closer observation, the structure also bears an uncanny resemblance with space debris.

When the mission was conducted by Colonel Ross and Dr James Newman, they attempted to install some thermal blankets for storing the energy. However, as the blankets were linked to the spacesuit, one among them was gone. In actual, these objects are most supposedly a thermal blanket that got lost. Close up photo of the space debris. (NASA)

Even after numerous claims about the Black Knight Satellite, there has been a major lack of evidence that can connect the LDE’s discovered by Tesla to the other discoveries made in 50’s and 60’s. However, it has become quite common for the conspiracy theorists to relate any unidentified object to the popular Black Knight satellite.

While some reports claim that the STS-88 sightings and UFO bear a striking resemblance with each other. Some other reports negate this claim and call it a mix of different reports about the Black Knight.

These myths about Black Knight Satellite is so confusing that it is now regarded merely a collection of random tales.

Enjoyed this article? Also, check out “Did Man Really Land on Moon? The Dilemma of Apollo 11’s Missing Tapes“.