While popular with campers, hikers, and adventure seekers, these mountains are also known for their exceedingly hot summers, freezing winters, harsh winds, unpredictable storms, treacherous terrain, and mysterious happenings. Reports of inexplicable sounds, sightings, and events have led to claims of supernatural beings and even aliens. Combine these with the legends of the indigenous Pima Indians and the mountains live up to their name.

Among the many legends to have emerged from the area, one of the most enduring ones is that of The Lost Dutchman’s Gold Mine. Supposedly a mine with fabulously rich gold deposits. Many people have died trying to find it over the years, and, even with all the modern technology at our disposal today, the exact location of the mine in the vast wilderness still remains an enigma.

Superstition Mountain has an elevation of 5,024 feet. These steep, jagged volcanic mountains were formed over 29 million years ago and they cover an area of 160,000 acres. As the mountains have a desert climate and few water resources, there is not much vegetation here.

At the low elevations, you will encounter tall saguaro cactus and Ponderosa pines at higher levels, and these are generally near the streams. Animals like deer coyotes, pumas and bobcats live here, existing alongside birds, rodents, snakes, and other reptiles. 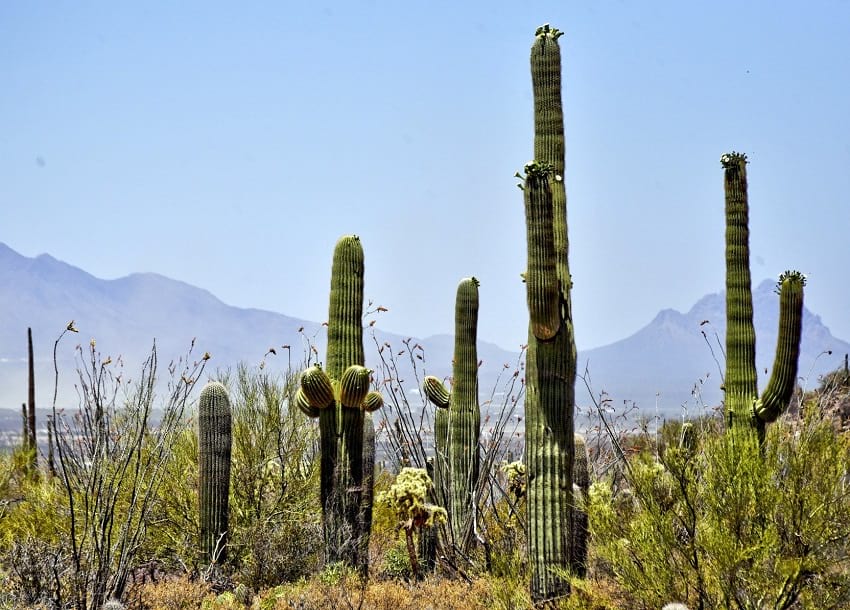 The weather in the Superstition Mountains is notoriously unpredictable, with storms seeming to come out of nowhere and accompanied by abrupt drops in temperatures.

Two prominent landmarks here are the Weaver’s Needle and the Miner’s Needle. These are tall, volcanic formations in the wilderness and are popular as hiking destinations. There are numerous hiking trails that hikers can access from multiple points, one of the more well-known ones being the Peralta Trailhead.

Legends of the Superstition Mountains

The Pima Indians famously feared the mountain that they knew as Ain-we-gophon (Superstition Mountain). According to their folklore, the mountain guards an ancient storehouse of precious metals and treasures, and anyone who ventures forth to get the treasure is likely to die.

According to the Apaches (North American Indians), the entryway to hell is in the Superstition Mountains. The mountain is also frequented with mysterious sounds that many people have claimed to have heard. The hellhole supposedly also sends out tremendous winds, and these cause the infamous dust storms of the region.

The Superstition Mountains, furthermore, are the abode of the Thunder God, and he causes the frequent regional thunderstorms.

There’s gold in them thar hills

There are many stories about hidden gold in the Superstition Mountains, and these usually mention the Peralta Family.

Don Miguel Peralta was the head of a powerful and wealthy Mexican family from Sonora, and they were either ranchers or operated mines or did both. They either mined or found enormous gold deposits in the Superstition Mountains. The stories differ from here onward.

According to some storytellers, in September 1848, a band of Apaches slaughtered the entire Peralta Family, except one (someone had to live to tell the tale). The Apaches were either enraged over the violation of their sacred mountains or wanted to steal the gold from them. Other storytellers claim that the Peralta Family escaped with gold, but another family died in the massacre. In any case,  the event led to the naming of the Massacre Falls after it.

In the version in which the Apaches killed the Peralta Family, the surviving member then went on to get embroiled in a brawl fight years later. Two prospectors saved his life and, in gratitude, he gave them directions to the gold mine, thus setting off a wild goose chase that continues to the present day.

Doctor Abraham Thorne’s visit to the mine

A doctor from Illinois, Doctor Abraham Thorne, provided his service to treat the indigenous people of the Southwest. After he had spent many years in their midst, the Apache Elders decided to reward his selfless service with gold. In the year 1870, with his consent, they blindfolded him and took him on a 20-mile trip to an unknown location piled with gold ore. They removed his blindfold and let him take away as much as he could carry. Thorne sold the ore for $6000 and became a wealthy man.

Later, he remarked that he had noticed a towering rock formation nearby, but otherwise remained clueless about the whereabouts of the place. Many people took the landmark to be the Weaver’s Needle but had no luck finding any gold nuggets in its vicinity.

Travis Tumlinson, a policeman, discovered the Peralta Stones on a roadside near the Superstition Mountains in the 1940s. These are rectangular, cross-shaped, and heart-shaped stones with etchings of a horse, a priest, a dagger, a trail, topographic features, and Spanish inscriptions. It is rumoured that if the stones are put together in the right way, they are a map to the Peralta Family’s gold deposits. Nobody has been able to interpret them correctly. 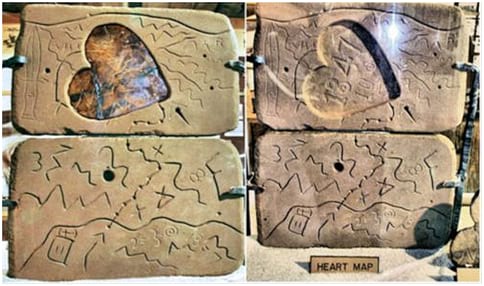 The legend of the Lost Dutchman’s Mine

To begin with, there was never any real Dutchman involved with the lost gold mine. The closest approximate was a German miner of the Pennsylvania German community. When they immigrated to Pennsylvania from Deutschland (Germany), the locals mistook Deutsch for Dutch. The newcomers, thus, became the Pennsylvania Dutch.

Two Pennsylvania Dutchmen, Jacob Waltz and Jacob Weiser, were prospecting for gold in the area, when, one night, they happened to save a man’s life in a bar brawl. He turned out to be the surviving Peralta, and, to express his gratitude, he gave them directions to his family’s gold mine in the Superstition Mountains.

The two Jacobs found the gold but refused to tell anyone else where it was. Then the Apaches killed Jacob Weiser, or according to some, Waltz himself did it.

Jacob Waltz took to returning to the mountains only when he needed the gold. He died of pneumonia in 1891 and, according to the three neighbours who cared for him, he left them the box of gold under his bed and directions to the gold mine.

The neighbours—Julia Thomas, Rhinehart Petrasch, and Hermann Petrasch—spent weeks looking for the gold, but failed to find it.

Mysterious disappearances in the Superstition Mountains

The legend of the lost gold continued to attract people, and, in 1932, a veterinarian in the Park Service, Adolph Ruth, decided to go treasure hunting. He had acquired maps that he was sure would lead him straight to the gold. Instead, he went missing and his skull was found 6 months later with two large circular holes. The rest of his remains were found a month later about a mile away.

A note in a bottle found floating down the Salt River said that he needed help on account of his leg and that he had found the Lost Dutchman’s gold mine. To underline his great find, he had also written ‘Veni, Vidi, Vici’ (I came, I saw, and I conquered) in his diary. However, there were no directions to the conquest mentioned in his diary.

Many other mysterious deaths in the Superstition Mountains followed that of Ruth’s in the subsequent years, including two soldiers from the U.S. Army. And, amazingly, a few of these people were also found in the same headless state as Adolph Ruth. The search, nevertheless, still continues.

The Superstition Mountains in popular culture

There have been many books, films, and cartoons about the Lost Gold of the Superstition Mountains. These include Barry Storm’s book Thunder God’s Gold, published in 1945, detailing his own efforts to find the gold, and the Glen Ford and Ida Lupino movie, Lust for Gold, from 1949.

Hanna-Barbara, Jean Giraud, and Don Rosa have incorporated the story in their cartoons. The Lost Dutchman State Park, which opened in 1977 and has the Peralta Trail, is also a nod at the legend.

There is a Superstition Mountain Museum at 4087 N. Apache Trail, Highway 88 in Apache Junction. It is open daily from 9 a.m. to 4 p.m. except on Thanksgiving, Christmas, and New Year.

Fire in the Superstition Mountains

On 8 June 2019, a fire broke out in the Superstitions Wilderness area and soon spread across 26,000 acres. It was the fifth-largest fire in Arizona’s history, it raged for over a month, despite the strenuous containment efforts of over 600 firefighters. Due to the out-of-control fire, the Arizona authorities were forced to close the State Route 88, and, along with it, public access to the Canyon, Apache Lake, Apache Campground, picnic sites, and trailheads.

Previous Article
Scaly-foot Gastropod: A Snail with an Iron Armour That Lives Near the Hydrothermal Vents
Next Article
Stanford Torus & Bernal Sphere: Model Space Colonies for Mankind to Set up Base in Space