Scaly-foot Gastropod: A Snail with an Iron Armour That Lives Near the Hydrothermal Vents The scaly-foot snail or scaly-foot gastropod has an ironclad body, with a metal shell wrapped around its delicate interior. Its scientific name is Chrysomallon Squamiferum and is commonly referred to as the “Sea Pangolin”. This species was only recently discovered by researchers in 2003, and they live at astonishing depths of about 9,500 feet, on the seafloor near hydrothermal vents in parts of the Indian Ocean.

The scaly-foot snail has been listed as an endangered species in the Red List by the International Union for Conservation of Nature, owing to human activities like Deep Sea Mining that have contributed to the destruction of its natural habitat. The scaly-foot snail’s habitat also lends itself to the production of high-quality metal ores, as the hydrothermal vents are a rich source for iron sulfides and a lot of other minerals. This encourages deep-sea mining to be conducted on a very large scale.

A coping mechanism for surviving an extreme habitat

With the scaly-foot snail’s habitat located about 1.5 miles below the sea level, the oxygen levels at these depths are rather low. Near the hydrothermal vents, temperatures can go up to 400 degrees Celsius (750 degrees Fahrenheit). These conditions make life here extremely challenging, however, the scaly-foot snail has adapted and survived these conditions owing to its special physiological features. The scaly-foot snail has developed a heart that is proportionately much larger compared to the size of its body. In fact, it has the largest heart to body proportion in the entire animal kingdom. The gigantic heart helps in proper blood circulation as well as enhanced oxygen exchange, thus combating the extremely low levels of oxygen.

To withstand the extreme temperature and pressures near the hydrothermal vents, the snail has developed an iron-clad shell. Scientists believe that the shell is produced from the toxic iron sulfides pouring out of the vents with the help of microbes. Its shell is covered in greigite and pyrite. Pyrite is known as “Fool’s Gold” and greigite is magnetic in nature which means the animal would actually get stuck to magnets.

The scaly-foot snail has a tough exterior and exhibits scales made of calcium carbonate. To combat predators, the ‘weaker’ species tend to adapt. A three-layered shell structure has served adequately for the scaly-foot gastropod. The shell comprises an outer layer- mainly composed of iron sulfide granules which give the shell its metallic covering, a thick organic middle layer, and a calcified inner layer.

Apart from this, the snail also has several energy dissipation mechanisms that help fend off predators. Such mechanisms also protect the shell from cracking when pressure is applied by predators like crabs.

The scaly-foot snail gets its name from the metallic scales present on the lower part of its body. This is also an adaptation to combat venom injected by predators into their delicate bodies. That being said, even if there were no metallic scales on its body, the snail could simply retract when attacked by a predator, and eventually float away due to the volatile nature of hydrothermal vents.

The food source of the scaly-foot gastropod mainly comprises of the microbes that react with the chemicals on its shell. These microbes are essentially chemoautotrophic endosymbiotic bacteria that survive on the snail’s body. At the same time, they provide all the nutrition that the scaly-foot snail requires.

Reproductive system and other anatomical features

The scaly-foot snail has been classified as a simultaneous hermaphrodite, meaning it has both female and male reproductive organs. It has a genital opening which is located right beside the mantle edge. Research also shows that it has a non-ganglionated nervous system and, a very simple digestive system. The ctenidium is an important part of the scaly-foot gastropod’s anatomy, housing the blood sinuses. The posterior of the ctenidium contains the rather well-developed and large heart of the snail.

Variations of the scaly-foot snail 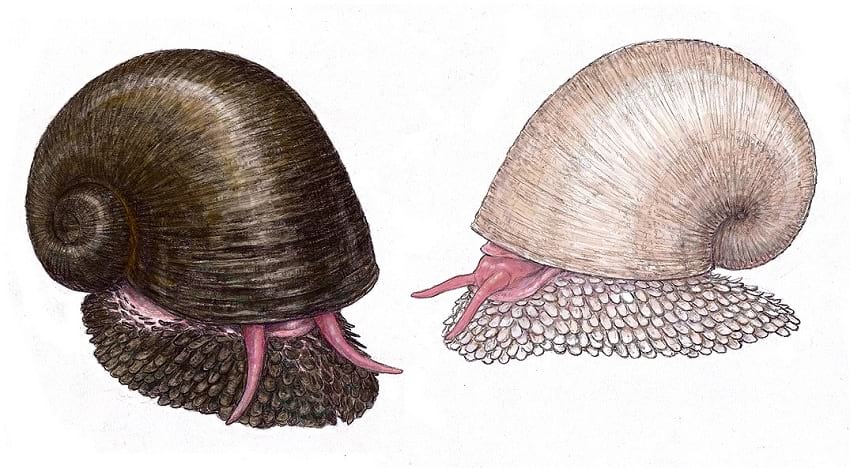 There are essentially two varieties of the scaly-foot snail, both in roughly the same habitat and under the same conditions. The reason for the differences between the two variants- the black scaly-foot snail and the white scaly-foot snail- arises due to the difference in the bacteria involved that causes the colouration. The Black scaly-foot snail has a certain bacteria which the white supposedly lacks. These bacteria are highly beneficial for the species and help make the iron sulfide shell. Not only that, but it also combats the toxicity from the hydrothermal vents and makes the armour/shell of the snail naturally poisonous. The colouration of each snail also varies depending on the amount of iron near the hydrothermal vent where the snail resides.

Deep-sea mining and its effect on the scaly-foot gastropod

Vacuuming is the process used to collect minerals off the seabed. This deep-sea mining activity has resulted in the destruction of the habitat of the scaly-foot gastropod. The International Seabed Authority (ISA) is developing a few rules and regulations that will be put in place to curb the destruction of the gastropod’s habitat. The 168 member body formed by the United Nations, has a clock ticking till 2020 to put together these new rules. As the demand for rare minerals that support modern technology increases, the deep-sea mining activities also gradually increase to fulfil those requirements. One can only make the activity more sustainable, as completely doing away with it is not an option.

Several experts have stated that there is no substitute for the habitat in which the scaly-foot gastropod thrives. Activist group Greenpeace wants to put a halt to mining activities until the deep ocean is understood better. However, instead of conserving the nature and the snail’s habitat, the International Seabed Authority has been specifically selling off mining contracts and serving the industry to benefit them monetarily.

Many hydrothermal vents are rich in gold, zinc, cobalt, lithium, manganese, and copper that are highly beneficial to the industry. To maximize the output of these metals from the seabed, 500,000 square miles of the seabed floor have been licensed off without caring for the natural habitat of the deep-sea creatures. The scaly-foot snail is only the first creature to be declared endangered due to deep-sea mining. According to scientists, there might be another 14 species of snails and other deep-sea creatures to be added to the IUCN Red List of Endangered Animals, due to mining conducted in these areas. Recently, 28 scientists wrote a letter to the authorities of the ISA requesting a halt to the mining activities, before irreversible damage is done to the seabed. The scaly-foot snail is one of its kind and faces a very big threat to its existence. To sustain this unique species, urgent action needs to be taken to promote its conservation.

Enjoyed this article? Also, check out “Hoosier Cavefish: The Blind Cavefish from Indiana Named after Their NCAA Basketball League“.

Previous Article
After the Discovery of X-Rays Came N-Rays – But Do They Actually Exist?
Next Article
The Superstition Mountains and the Legend of the Lost Dutchman’s Gold Mine