We are all well aware of how the harshest conditions like those of the Arctic region present us with some of the most beautiful wonders of nature and some very unusual optical illusions. Some of these illusions and wonders are limited to those regions. But thanks to the unrelenting torture that we have been putting this planet through seems to be altering our weather patterns in a very wrong way.

In the year 2017, we witnessed one of the coldest winters all over North America. While people had to endure the bitter cold, they witnessed a colourful upside. Twitter and Instagram were filled with pictures taken by photographers all over North America of bright colourful light pillars that dazzled people all over the world. The skyward shooting light pillars or poles lit the night sky with colours ranging from yellow, blue, red, green and white. 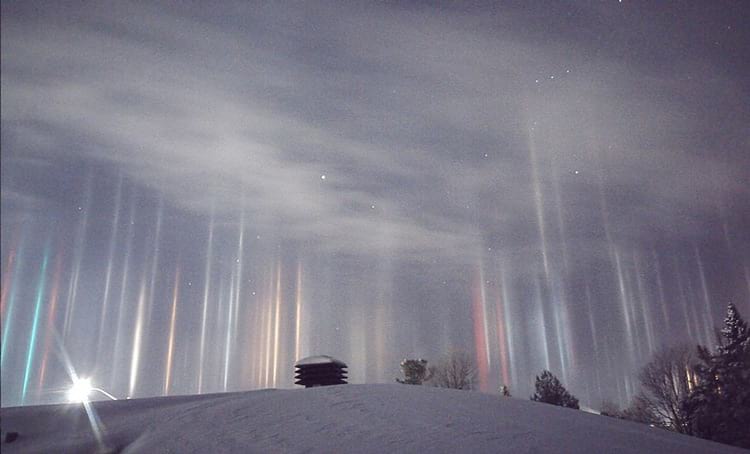 How do Light Pillars occur?

Light pillars or poles are a natural phenomenon caused by the presence of a large number of ice crystals “normally present in high clouds floating in the air close to the ground”. These flattened hexagonal plate-shaped ice crystals which are usually horizontal act as mirrors reflecting the light downwards. They are beams of gathered light from millions of crystals which reflect the incoming beam of light into the eyes or camera to create this illusion.

These are usually seen in regions where the temperatures fall as low as the Arctic region because under normal weather conditions of North America the ice crystals are not present close enough to the ground to form the poles of light. But during the past winters, these were even visible as far south as the state of Ohio, USA when the temperatures hit a record low.

While this might be a sight to behold, there remain some unanswered questions. Is it a precursor to further, drastic climatic change? Should this be taken merely as nature’s marvel? Can we continue to keep our eyes closed towards climate change?

But while we answer these questions and figure out a plan of action to save our planet from further destruction at our own hands, I don’t see any harm in enjoying the beautiful sights that Mother Nature is offering us.

Previous Article
Stanford Torus & Bernal Sphere: Model Space Colonies for Mankind to Set up Base in Space
Next Article
Understanding Dictatorship – Why They Don’t Last and What Are the Early Signs of Dictatorship?