Optical Telegraph: Communication Before the Internet 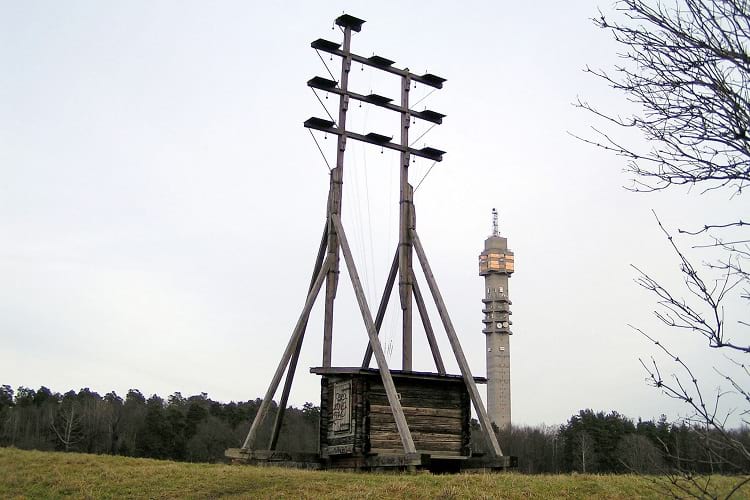 A reproduction of an optical telegraph in Stockholm, Sweden. (CBX / Wikimedia Commons)

These days, long distance communication is so simple for those living in technologically developed countries. So simple, that us fortunate enough to have it cease to even think about it anymore – until there are connection problems or the battery runs out. Usually, it won’t take long until it returns, but if a pressing matter then we can visit a cafe for a charger or even go to a public library to use a computer. A possible backup will remain with the telephone line in case of emergency – many options are available in that aspect.

Imagine those in the past or those in developing countries who become lost, with no conduits for contacting anyone. They have to rely on the kindness of strangers but many still run the risk of being lost forever in foreign environments or in serious situations, with no way of contacting help. That is why the invention of the telegraph was so important, and even more so in terms of industry, business, politics and war. It was the first step towards the invention of the telephone and internet. From smoke, fire and drums at various points of the past to messages through the air at the speed of light. And with them, the world changed completely.

It is said that modern humans evolved around 1.7 million years ago. Small knit communities were the normality then, pressed by a lack of communication which brought about anxieties about the outside world. Any long distance messages were limited to the speed of a person’s foot or animal’s hooves. Tamed birds would increase this to the speed and directness of wings; however, it was less reliable to send carriers such as pigeons. Humans can travel around 6 KPH and horses 21 KPH if swapped regularly so it was a painstakingly slow transfer of information. Across large stretches of water, the time of arrival would rely on the velocity of boats and ships which would be slightly quicker. Otherwise, smoke signals and fire beacons have been used to send information for millennia but it can only be extremely basic data.

Millions of years of surviving with primitive methods would begin to change in 1791 with the optical telegraph invented by Claude Chappe named Le systeme Chappe. Before this, he worked on prototype designs with his brother such as a pendulum system and a panel system. In regards to the maiden syncronised pendulum device, Claude Chappe explains,

“The first telegraphic correspondence… was done with two pendulum clocks that were kept in perfect synchrony; the face of the clocks was divided into ten parts, each part designating a different numeral …When the pointer of one clock passed over the number one wanted to indicate, a sound was made….  By representing the words in a dictionary with successive numbers one could thus transmit any thought. …”

The semaphore system would be preferred.

“… next consisted of a large horizontal beam, called a regulator, with two smaller wings, called indicators, mounted at the ends, seemingly mimicking a person with wide-outstretched arms, holding a signal flag in each hand. The angles of the indicators… could be varied in increments of 45 degrees, sufficient for the encoding of hundreds of symbols…”

Each tower could be as far as 20 kilometers away from each other with telescopes implemented among them. These telescopes would see the signals with as many as 196 different positions symbolising letters, numbers and phrases to illustrate any thought.

While the technological revolution was sparked by Chappe it became synonymous with another revolution of the political variety. The first famous use of the Chappe system was during the French Revolution when the French Emperor Napoleon Bonaparte took advantage of it for his military campaign. Between Paris and Lille were 15 Semaphores in the space of 230 kilometers, one symbol could arrive in only ten minutes time. Napoleon came to power after the French Revolution and his legions amassed over 530 towers from Amsterdam to Rome – it is said that there were even plans to devise one across the Channel in Britain, a land he planned to conquer. A short message could take one hour between Amsterdam and Rome for instance. Before the optical telegraph, the same message arriving via horses would take roughly one month. Here is an example of an order which was sent to Italy during Napoleons’ campaign.

“The Legion of the South may recruit men in Turin from among the Piedmontese prisoners-of-war or Austrian deserters. However, it must not recruit men who are not from Piedmont.”

Another was when Napoleon’s son was born in Paris. The concept is described infamous French literature with an Alexandre Dumas classic, The Count of Monte Cristo. The count himself uses the system for evil by creating a fraudulent message which creates financial upheaval in the French capital.

Other countries made their own interpretations of the device, inspired by the French. This included across Western Europe, Scandinavia and into North America also. Yet, by this time it had already started to fall into decline with a modern advancement coming in the form of the electrical telegraph in 1844. When Napoleons’ French Army lost territory, many liberated countries would dismantle the telegraph, such as in the Netherlands when they defeated the French. The new system now used wires to transfer messages as well as radio waves in later years. They used the Morse Code as a language – defined by the Merriam Webster dictionary as, “…either of two codes consisting of variously spaced dots and dashes or long and short sounds used for transmitting messages by audible or visual signals.”

It would remain the premium source of communications up until the invention of telephones almost two centuries after. The electric telegraph way was not hampered by adverse weather conditions and it was harder for enemies to decipher.

Telegraphs gave birth to the idea of fast, long-distance communication. The inventions that evolved from them have changed the world more than most others. From millions of years of communication being resigned to how fast a person could run and then within two hundred years later, instantaneous transatlantic communication is truly remarkable.

The next step in this dawn age of modern technology is 5G (5th Generation) – a wireless system with supposed average download speeds of 1GB per second – that’s around 230 songs or a short film! A far cry from the days of smoke signals and semaphore. With telegraphs, the premium means of messaging only two hundred years ago, one cannot imagine what mediums will be being used in the future. Looking ahead to say, 2300, and the world of Sci-Fi will be very much a reality in that regard.