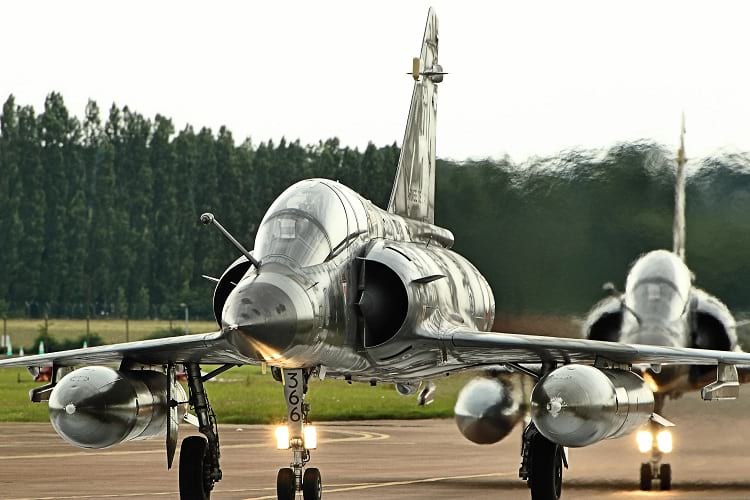 The military preparedness of any nation is judged by its loaded arsenal. And if it has the best in its collection to supply to its army, navy and air force, that country no longer lags behind in war. In light of the ghastly terror attack in Kashmir, the Indian Air Force, which recently carried out a surgical strike on Pakistan, is the proud owner of a fleet of aircraft that only some of the superpowers of the world possess. The Mirage 2000, an impressive and deadly aerial beast, is a fighter jet that has come to India’s rescue in all her times of need.

Designed in the late 1970s and manufactured in France by Dassault Aviation, the Mirage 2000 is a multirole combat aircraft, which can perform a wide range of tasks. Right from aerial combats to dropping bombs, long-range missiles at specific targets and also carrying out air-to-ground strikes, the light-weight fighter plane is undoubtedly a force to reckon with. It was initially pressed into service in the French air force in the year 1984 after it took its maiden test flight in the year 1978. In service with nine other countries, including Brazil, Egypt, France, Greece, Peru, Qatar, Taiwan and the UAE, the fleet of Indian Air Force’s Mirage 2000s came to be inducted in the year 1985. Together with the advanced and heavy fighter jets like the Russian-made Sukhoi and MiG-29 and the indigenously-developed Tejas, the aircraft was put into Indian service during the Kargil War of 1999.

Countries that use Mirage 2000. (Wikimedia Commons)

While Pakistan purchased North American-made Lockheed Martin F-16 fighter planes, India went a step ahead and ordered thirty-six single-seater and four twin-seater Mirage 2000s in the year 1982. Since then named ‘Vajra’ from the Sanskrit word for thunderbolt, the Mirage 2000 is an ultra-modern warplane that mostly delivers with hundred per cent accuracy. The aircraft readily served in India’s favour against Pakistan at the line of control in Kashmir. Despite a dry weight (which includes the weight of crew and passengers, fuel, other necessary fluids and scientific equipment) of around 7,500 kilograms and a maximum takeoff weight (maximum weight at which an aircraft is allowed to make an ascent) of 17,000 kilograms, Mirage 2000 still remains a light-weight aircraft. It measures approximately forty-seven feet in length and has a wingspan of around thirty feet. The delta wings (triangular wings shaped in the Greek alphabet Delta) allow the jet to manoeuver smoothly and maintain its stability mid-air. The IAF Mirage 2000 is available in single or twin-seater options as per the requirement of the air force. The fighter jet with a single-shaft engine can ascend at a maximum speed of 60,000 feet per minute and can reach a maximum speed of 2,335 kmph or Mach 2.2. The Dassault Mirage 2000 is capable of aerial refuelling. (US Gov)

The Mirage 2000 hits targets with precision and remains the most reliable aircraft in the Indian Air Force. Even the state-of-the-art pilot helmets of Mirage 2000 come equipped with a display inside them. These allow the pilots to see superimposed radar data directly inside, without having to refer to information relayed in the cockpit. This feature enables the pilots to aim weapons at targets by simply turning their heads, without manoeuvering the entire fighter plane in that particular direction.

As many as twelve fighter jets flew into Pakistani airspace recently and the combat aircraft, which also happens to be India’s most preferred war plane, is the country’s trusted aide that thunders in its skies, delivering with a success rate like no other, answering all the calls of duty whenever made.

Enjoyed this article? Also, check out “Hughes H-4 Hercules | The Largest Flying Boat That Flew for Only 26 Seconds“.

Previous Article
Skylab: The Space Station that Failed in Spite of Brilliant Conception and Brave Execution
Next Article
History of Pinewood Hospital: The Sanatorium for Treating Tuberculosis in the United Kingdom