The entry of America in World War II happened by default, and at a late stage, but the continent went whole hog into it. Its military preparedness went much ahead of the war itself. A fleet of P-82 Twin Mustang Aircraft (later called F-82 Twin Mustang) was still in the process of manufacturing as curtains came down on World War II, the very event for which this fleet of fighter aircraft was being made.

That’s in line with the ethos of military preparedness; better be over-prepared than less. F-82 indeed is a chapter on how to gear up for war. North American F-82 Twin Mustang was designed in 1943 for back up support to bomber aircraft. It could fly 2,574 km fully loaded, even more, when equipped with auxiliary fuel tanks (drop tanks).

Its massive frame looked like two P-51 airplanes joined with a common wing, and tails connected with a horizontal plate. It was designed to give multi-layered protection to fighter planes while on a deep strike mission. First twenty rollouts of this aircraft had two cockpits for two pilots who could alternate controls on ultra-long-range missions to overcome fatigue. 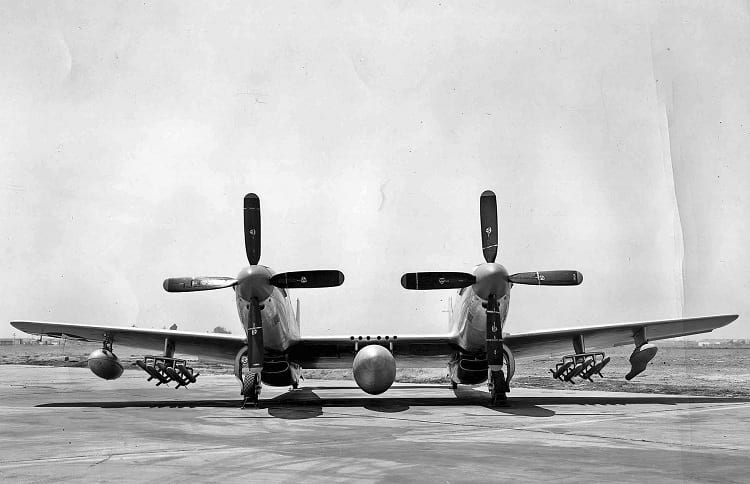 Its jumbo size notwithstanding, F-82 was agile enough to dodge and dogfight the enemy fighter planes. Power of Rolls Royce Merlin engines gave it a top speed of 750Km/hour. Six machine guns of 0.50 calibre mounted on the central wing, and ability to carry an additional load of 25 air to ground rockets or up to 4,000 pounds (approx 1800 kg) of bombs on the hardpoints in outer wings, made it a real scare with the epithet ‘Double Trouble’. Application after the Second World War

World War II ended well before the launch of P-82. But as the cold war between America and Russia was very much rife, this fighter plane remained relevant even after the World War. Transition to jet engines would still take time and there had to be a time gap arrangement for wartime exigencies. So the Pentagon placed the order for P-82 Twin Mustang, the last of Piston-Engine aircraft.

It was re-designated as F-82 and commissioned into SAC (Strategic Air Command) as a fighter escort for long-range strikes. The radar edition of it safeguarded US coasts from the Russian bombers like Tu-4 Bull. Twin Mustangs were the first Allied warplanes to counter the Communist invasion of South Korea in 1950. Within hours of the North Korean invasion, F-82s were flying over the Korean borders. They not only drove enemy aircraft out but also destroyed three of them clinching first air-to-air victory. Combat missions of F-82 continued in Korea for the following two years.

By 1951 jet engines arrived on scene and piston engines were pushed to the margin. Some variants of F- 82 continued flying till November 1953. As of now, only five of these, from a total of 272 manufactured units remain conserved in museums and warehouse.

Death and restoration of Twin Mustang

The most innovative product in the series of P-51 and Mustang, P-82/F-82 finally bowed out to jet-engine technology. To counter fatigue during long flights the cockpit was modified and a tilt-adjustable seat was introduced. A versatile flyer, fighter, long-range escort, attack bomber, night fighter, long-range reconnaissance aircraft, rocket fighter and interceptor, F-82 Twin Mustang is now history.

This history though is revved up by Tom Reilly, the famed for the restorer of trashed aircraft. He procured a prototype for Twin Mustang and went about resurrecting F-82 in its pristine form through his intensive ‘restoration’ project. The prototype was of early P-82 with dual control (two cockpits and two pilots).

Reilly’s dedicated search led him to a crashed F-82 in Alaska. Next breakthrough was finding a brand new Merlin engine in Mexico City. With help pooled in from myriad sources, Tom and his crew have sculpted XP-82, a reborn F-82. Now, one can hope not only to see and feel the history but, very possibly, fly in it as well.

Enjoyed this article? Also, check out “Why NASA Loves the Super Guppy Aircraft?“.

Previous Article
Cave of the Crystals: A Geological Wonder with Giant Shimmering Crystals
Next Article
The Ghost Ship, the Flying Dutchman: A Parable or an Illusion, Fata Morgana?