History of Pinewood Hospital: The Sanatorium for Treating Tuberculosis in the United Kingdom 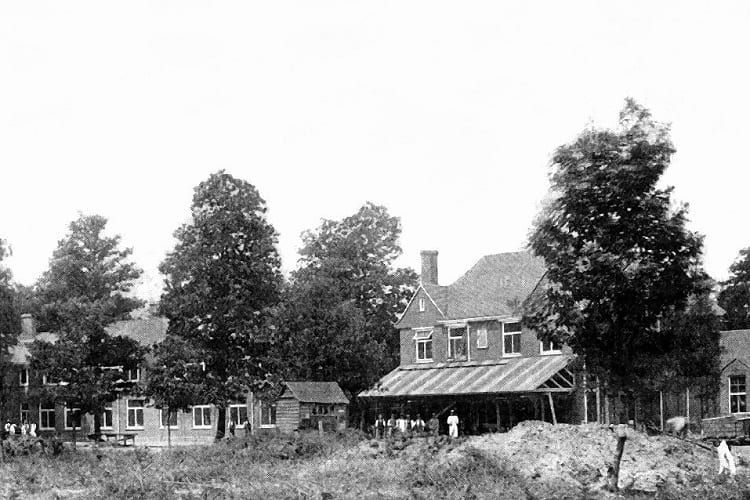 Pinewood Hospital was a hospital in Berkshire in England that started as a sanatorium for tuberculosis patients in 1901. During the two World Wars, it also treated injured soldiers. In the 1950s, with tuberculosis becoming less prevalent in the UK, the hospital began taking in patients with cardio-thoracic problems. It closed doors in the 1960s.

The scourge of tuberculosis

One of the earliest mentions of tuberculosis was in the Huang TiNei-Ching, a Chinese medical text from the third millennium BCE, but the disease has existed since more ancient times. Researchers have discovered traces of the disease in Neolithic bones.

From antiquity to the present day, it has remained a widespread and dreaded disease.

In the 17th to 19th centuries in the United Kingdom, the public knew it more commonly as consumption and the doctors considered it both an inherited and communicable disease. Another common term for it was the white plague on account of the pallor it cast on patients and literary figures like Percy Bysshe Shelley, Lord Byron, John Keats, Emily Bronte, and Robert Louis Stevenson gave it an unwarranted and nonsensical air of romanticism. These people actually thought there was something “ethereal” and attractive about looking pale, wasting away, and coughing up blood.

Until the discovery of antibiotics, there was no cure for tuberculosis and doctors attempted to treat it with isolation, rest, and time spent in the fresh air.

This was something the rich patients could afford to try. For the poor folks, there was no other course than to suffer in utter wretchedness until death finally relieved them.

The idea of creating a sanatorium for ordinary English citizens came about in 1898 when the Prince of Wales met with the National Association for the Prevention of Consumption at Marlborough House.

On 22 July 1901, the National Association for the Prevention of Consumption opened the London Open Air Sanatorium to treat tuberculosis patients in Pinewood, an area near Crowthorne in Berkshire in England. Pinewood was an 82-acre area with an abundance of pine trees, and these pine trees were the main reason that the association members chose the land when they were looking for a suitable site for a tuberculosis sanatorium. At the time, many medical experts believed that breathing in pine-scented air was beneficial to the lungs and would help in curing tuberculosis. 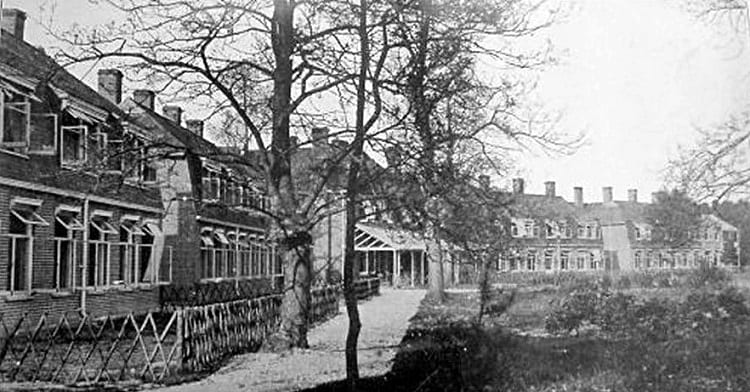 The London partners of the firm of Messrs. Wernher, Beit and Co. financed the sanatorium project for 40,000 pounds in return for an annual interest of two and a half percent, and the sanatorium committee decided to charge the patients three guineas for a week at the sanatorium.

The buildings of the London Open Air Sanatorium

The red-brick, red-tiled sanatorium buildings consisted of isolated and south-facing, two-storey bedroom blocks for the patients that were on either side of a central administration building. The independent dining block for the patients, doctors, and the other staff was behind the administration building and behind it were the kitchen and the quarters for the sanatorium’s servants. Behind that was the isolated laundry with a disinfectant system to sterilize all the sanatorium’s washing.

The two separate bedroom wings had 16 rooms on each floor, making a total of 64 rooms. The first 64 patients that came to the sanatorium were all male and presumably well-off enough to be able to afford the three guineas per week charge for living there and receiving treatment from the sanatorium’s experienced doctors. The rooms had large windows to let in plenty of light and air. The building designers took particular care in rendering the building’s woodwork and stairs in a very plain fashion in order to prevent any dust accumulation.

All the buildings had electricity. In 1913, the British parliament passed the Public Health Act and authorized the Metropolitan Asylums Board to treat London’s poor and others who were suffering from tuberculosis. Towards this end, in 1919, the Metropolitan Asylums Board took over the London Open Air Sanatorium and renamed it Pinewood Sanatorium. They increased its capacity from 64 beds to 160 beds by building prefabricated dormitories on the sanatorium’s grounds.

They encouraged patients to spend as much time as possible in the open air under the pines, and they urged patients, who appeared to be recovering, to participate in more active pastimes like tending to vegetables in the garden and sweeping the garden paths.

Pinewood sanatorium during the World Wars

During the First World War, Pinewood Sanatorium opened its doors to also treat ill and injured soldiers from the war front. They took particular care of the soldiers that had survived gas attacks in the trenches.

After the Second World War broke out, the hospital once again treated sick and injured soldiers. The Canadian Red Cross set up its base at the hospital and built several wooden huts to accommodate the increasing stream of war-injured patients.

Pinewood Hospital in the after-war years

In 1954, Norah Henriette Schuster, the first female doctor to receive a hospital appointment in the UK, came to work at Pinewood Hospital and set up a pathology lab in one of the still-standing wartime wooden huts. It was Pinewood Hospital’s first pathology lab. By this time, the hospital was taking in fewer and fewer cases of tuberculosis patients as the use of antibiotics since 1944 had done a remarkable job of nearly obliterating the disease from the UK. That being the case, the hospital now saw more cases of people with thoracic diseases, aspergillosis, bronchitis, and other similar problems.

By 1960, Pinewood Hospital was treating more bronchitis patients and even had a 230-bed ward for them and specialist doctors at hand to treat them.

Pinewood Hospital closed in 1966. The sanatorium buildings no longer stand on the site, although some of the wooden huts are apparently still there.

When medical researchers discovered that antibiotics were effective against tuberculosis, few people could have imagined that the dreaded disease would make a comeback and in a more malignant form. It rebounded in the 1980s with drug-resistant strains and, by 1993, its reach extended rapidly enough around the world for the World Health Organization to consider it a matter of global health emergency. Researchers estimate that there are around 500,000 cases of drug-resistant tuberculosis around the world every year and the numbers are steadily increasing.

Enjoyed this article? Also, check out “The Rise and Fall of the Victorian Era Creepy Therapeutic Treatment Called Electric Bath“.

Previous Article
IAF Mirage 2000: The French-Made Fighter Aircraft that Answers India’s Call of Duty
Next Article
Under the Sea: Do Fishes Dream?