Deemed as the world’s biggest flying boat that has ever been made, Hughes H-4 Hercules now stands for display inside the Evergreen Aviation & Space Museum in McMinnville, Oregon, United States. Also known as Spruce Goose – the strategic cargo flying boat only flew once in its lifetime.

It was at the time of World War II that US government had commissioned to have a flying boat built that would facilitate the transportation of war material and personnel to Britain. Allied ships were attacked by Germans and hence, they needed an aircraft to make their way across the Atlantic Ocean, without being raided by German soldiers.

The flying ship was the brainchild of a shipbuilder, Henry J Kaiser. But since he was a ship manufacturer and had no knowledge of how to build an aircraft, he approached Howard Hughes, of Hughes Aircraft Company.

In 1942, the order to have three such aircrafts developed within two years was placed by the government and Kaiser. Soon, Hughes and his designer Glenn Odekirk began working on it. Since it was wartime, strategic material like aluminium was not available, so the aircraft was made entirely out of birch wood with its rudder and elevator made out of fabric.

The development moved at a slow pace, partly because of limitations in availability of metal and partly because of Hughes’s perfectionist attitude. The very first HK-1’s construction took about 16 months, which irked Kaiser and he withdrew himself from the project. 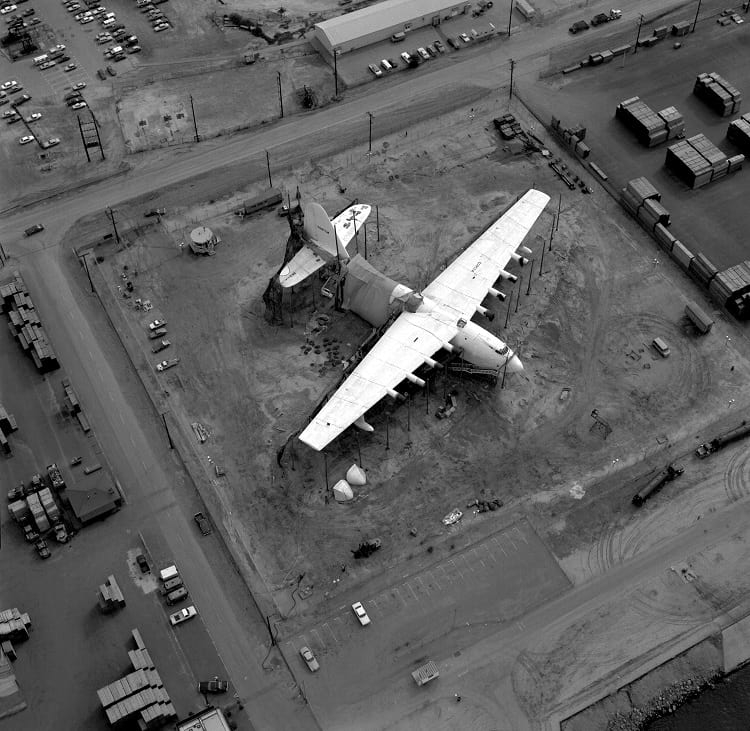 After Kaiser’s exit, Hughes continued the project and titled it, H-4 Hercules. This time the government signed on completion of a single unit. The work pace was still slow and the cargo flying aircraft was only completed much after the war was over, hence not serving the purpose for which it was built in the first place.

Hughes completed his work on the aircraft at Hughes Airport (that is now popular as Playa Vista, Los Angeles, California). He made use of the Duramold process. This process makes use of a unique technology for the construction of wood; the technology was much advanced when compared to the techniques used in those days.

The plane’s design was chosen to be a behemoth, which was zeroed upon after as many as seven configurations. It was supposed to carry around 150,000 pounds, together with 750 fully equipped troops.

Hughes H-4 Hercules was transported to Long Beach (California) by a house moving company. Since the size was gigantic, it had to be moved in three huge sections namely, the fuselage, and each wing of the aircraft. There was another shipment, smaller in comparison to others, which had a tail and smaller assembly parts. The aircraft was assembled by Hughes Aircraft. After that, there was an erected hanger near the boat and a constructed ramp to initiate the aircraft into the harbour.

In 1947, Hughes had to appear before the investigating committee of the Senate War to explain the time delays and how the government funds were being put to use. Hughes, who now had to prove to people, took the machine for a run on November 2, 1947, that’s when the taxi tests began with him at the controls. The flight crew included co-pilot, Dave Grant, two other flight engineers, Don Smith and Joe Petrali, 16 talented mechanics, including two more flight crew members.

Apart from this, H-4 also had a few invited guests. These eminent guests were invited from the press corps. They were also accompanied by various representatives from the industry. When counted, a good number of 36 people were on the flight.

Things took a different turn on the most important day when the test run was conducted. Just before the final test run, four reporters left to file stories and the remaining were flight-bound on Hughes’s masterpiece. The Spruce Goose did take off and was in air for almost 26 seconds at a height of 70 feet above the sea for about a mile at the speed of almost 135 miles per hour (1.6 km at 217 km/h). A historic moment was thus created.

The aircraft met its unusual fate. It never flew again. After Hughes died in 1976, the dispute over ownership of Spruce Goose began and ultimately the largest aircraft that was ever built ended up being displayed at Evergreen Aviation & Space Museum.

Previous Article
Diving Horse: Act of the Twentieth Century that Baffled the Audience
Next Article
Iceberg B-15: The Largest Floating Object