Manfred von Richthofen: The Flying Ace with the Most Combat Victories Wars have never given the world anything positive to harp on. They have only brought out disastrous results with millions of people losing their lives, their countries and their loved ones. But there was something good about WW-I that the world still happens to remember.

The First World War was technologically advanced and employed machines for the first time, with their operators going down in the annals of history. WW-I introduced submarines that could manoeuvre under the sea, tanks that could tread any ground and aircraft that gave a better view from the skies. Amid all this, there’s one name that stands out – Polish-born legendary fighter pilot Manfred von Richthofen, who went on to become the flying ace to have shot down as many as 80 enemy warplanes in his short career.

Born in a Polish noble family in 1892, the male members of Manfred’s family were termed barons, which also gave him the nickname “Red Baron” later in his professional life. Interested in athletics, gymnastics and hunting since the age of four, Richthofen was sent to train in the military when he was only eleven, after which he joined the Polish cavalry, where he began his military career. Richthofen gradually climbed up the professional ladder and became a lieutenant but his heart lay elsewhere.

In 1914, when the First World War broke out, a 22-year-old Richthofen was serving in an obsolete cavalry unit, working with trench men, where he worked as a dispatch bearer for some time. The unit was soon disbanded and the cadets were assigned to carry out odd tasks. Boredom quickly crept in and Richthofen requested to be transferred to the flying squad, which was relatively newer but was one of the most happening warfare groups at that time. He was assigned task under the bomber unit, but Richthofen didn’t want to stop at that.

Off to a ‘flying’ start

At that time, Germany’s national hero, Oswald Boelcke was mentoring new cadets on flying practices and that was when Richthofen requested to be transferred to his unit, where he would eventually learn to fly a military aircraft and become not just the only flying ace during WW-I but also the deadliest aviator and the most ‘colourful’ of them all.

Once on a train journey, Richthofen impressed Oswald with his eagerness to learn flying and a conversation led the latter to invite the young cadet to join his unit – “Jasta 2” – in 1915. Richthofen had a rough start to his flying career. He struggled at the controls and was a substandard pilot, crashing his aircraft once while learning. But he was a quick learner and under Boelcke’s tutelage, Richthofen flew for two months and stuck to the tactics and manoeuvres his mentor had taught him. 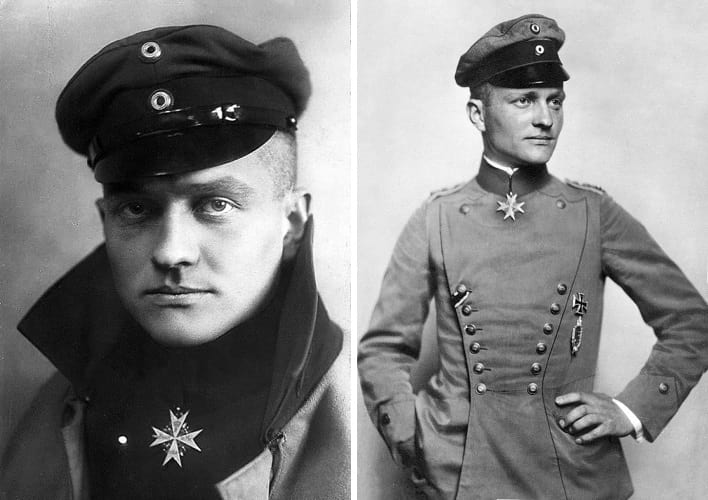 In April 1916, Richthofen drew first blood over Verdun shooting down a French warplane, which unfortunately did not go in his credits. Post Boelcke’s death in October 1916, which Richthofen was witness to, he was on his own and was even more determined to bring laurels to his guide and dear friend. It was later in September the same year when he shot down a British aircraft near Cambrai in France that got his name etched in the records.

In less than a month, the aviator had successfully registered five victories and qualified as an ace. Richthofen wasn’t a great pilot, but his knowledge of manoeuvres and aerial tactics led him to become one of the greatest aviators of all time.

Although he was more commonly associated with his Fokker Triplane, Richthofen had his majority victories in his Albatross biplane. By early 1917, The Red Baron had completed sixteen kills and was awarded the highest military recognition for flying aces known as the “Pour le Merite” or more informally as “The Blue Max” from the German government.

In the months to follow, he was allowed to start his own unit – “Jasta 11” – and by April 1917, Richthofen had downed more than twenty enemy aircraft, setting an unbreakable record. The numbers only kept going up and by the time May arrived, he was credited with shooting down 52 planes.

The autumn of 1917 was also the first time when he started painting a scarlet-vermillion hue to his aircraft – the Albatross D.III. The term “Red Baron” also originated from the red colour of his fighter plane, which was easy to identify against a bluish-grey sky.

Richthofen was given the task of commanding a larger unit called “Jagdgeschwader 1” or JG1, with four smaller units, which came to be known as the “Flying Circus”, because of the spectacularly bright-coloured fighter planes and their versatility. Their vibrantly-coloured tents and caravans soon became associated with their unit’s name too.

It was in June 1917 that Red Baron’s flying manoeuvres came to a halt when a bullet grazed his skull during warfare. He was sent home where he received a hero’s welcome, with several young women craving for his attention. But soon enough, while in recuperation, Richthofen resumed duty in late October 1917, only to combat nausea and headaches more frequently on the job along with enemy warplanes.

On April 21, 1918, while Red Baron was chasing down a novice Canadian pilot, they drifted into the Allied territory in the village of Vaux-sur-Somme in France, when Canadian Captain Roy Brown shot a .303 bullet, striking Richthofen directly in his chest, puncturing his lungs. He breathed his last while bringing his beloved Fokker to a rough landing. At the age of 25, Manfred von Richthofen, the flying ace and a national hero, was not only one of the youngest and most respected warfare experts, who stared death in the face, but was also one of the most disciplined leaders the world had ever seen.

His death was greatly mourned across Germany, as the Allied officers lay him to rest in Bertangles amidst full military funeral rites and rifle salutes.

Previous Article
Cassadaga in Florida: Home to the Largest Psychic Community in the World
Next Article
When Default Becomes De facto: Island of California, the Cartographic Mistake Which Became the Gospel Truth