Simo Hayha, famously dubbed as “The White Death,” is regarded as one of the greatest marksmen in military history. The Finnish man from Karelia earned more than 500 kills while bravely defending Finland against the mighty Soviet invasion during World War II. His role in the war earned him many medals, and much respect, making him an immortalized national hero.

Simo was born on 17th December 1905, to a Lutheran family who lived in the Karelia region, which is now located in modern-day Russia. Simo was the second youngest among his eight siblings. At the age of 20, he enrolled in the Finnish voluntary militia, where he served for about a year. It was here that he acquired the training that would go on to make him one of the most revered snipers in history. Before the onset of the Winter War, Simo spent most of his day farming and hunting.

In 1938, Europe was in complete disarray. Hitler’s rise to power was greatly threatening the peace and stability of the region. And like most countries, the Soviet Union were extremely wary of this development. Worried about an invasion from the north, in April the same year, the Soviet Union sent representatives to speak with the Finnish government. Here, they expressed great concern over Nazi Germany and a probable invasion of Russia through parts of Finland. The Finnish government, at the time, were officially neutral. While they were not ready to launch an offensive, they assured the representatives that any Nazi incursion on its borders would be met with swift resistance. This didn’t go down well with the Soviets though.

About thirteen years prior, Hitler’s infamous manifesto, Mein Kampf, was published. In it, he clearly mentions the need for Germany to invade Russia. This and the political climate at the time convinced the Soviet Union that an attack was imminent. Rather than wait around for things to reach such a critical stage, the Soviets were determined to make the first move, and blatantly refused any promises from smaller countries. As negotiations began to break down, on November 30, 1939, the Soviet Red Army invaded Finland, marking the beginning of the 105-day long Winter War. 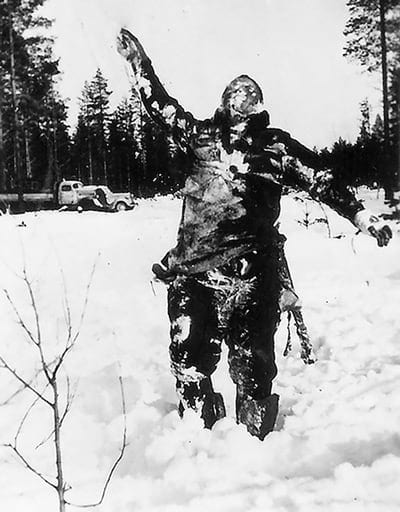 Dead Russian Soldier erected by Finish army as an intimidation to the Russian during the Winter War. (Фотокор / Wikimedia Commons)

Strategies used by Simo Hayha during the war

On hearing this development, Simo Hayha sprang into action. He packed himself some food, put on some plain white camouflage, picked up his rifle, and darted towards the front, which was not too far off from his home. He would make his way through the bush until he found himself a perfect vantage point. Once here, he would take the position and wait for a target. This wait could last anywhere from a few hours to a few days. One must remember that temperatures on the battlefield never rose above zero degrees. Despite the extreme cold, Simo would hideout in the wilderness, completely committed to the cause.

Soon, Simo realized that the Russians were using already established routes to move troops and supplies to the front. This made it easier for the sniper to find suitable spots to lay low. Simo would employ a variety of techniques to ensure that he was never detected. Apart from hiding himself meticulously, Simo, as mentioned previously, would wear a white camouflage that helped him blend into his surroundings. Additionally, he never used a scope on his rifle, fearing that the sun might reflect on the glass and give away his position. All his targets were eliminated from a great distance with unassisted vision. Further, Simo always kept some snow in his mouth to prevent his breath from steaming. Such methods ensured that the Soviets could never figure out his exact location. 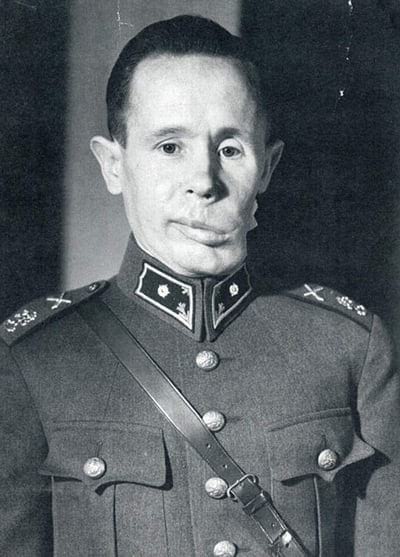 Simo Hayha after facial reconstruction due to an exploding bullet that blew off half his jaw. (Finnish Military Archives / Wikipedia Commons)

As the war progressed, Simo continued to make a dent in the Soviet advance. On average, he was gaining 5.5 kills a day. His highest tally in a day was a remarkable 40 confirmed kills. However, just about a week before the end of the war, on March 1940, Simo was injured severely by an exploding bullet that shattered his jaw. After being admitted to the hospital, Simo was required to undergo facial reconstructive surgery and remained in a coma until the day the war ended on March 13, 1940.

After the end of the war, Simo humbly returned to his prior routine of hunting and farming. In 1970, the war hero moved to Rasila, Ruokolahti, where he lived in a one-bedroom apartment until 2001.

In 2002, Simo breathed his last at a war veteran’s hospital in Hamina at the ripe old age of 96.

Enjoyed this article? Also, check out “Hanns Scharff: The Extraordinary Interrogation Technique of a Nazi Interrogator“.

Recommended Read:
A Frozen Hell: The Russo-Finnish Winter War of 1939-1940 | By William Trotter