Dazzle Camouflage: The Wonder That Worked in World War I 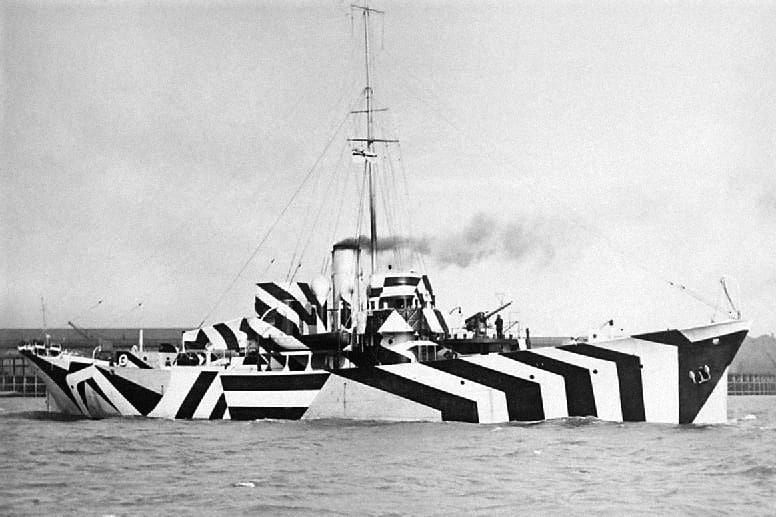 Dodging the enemy in a battlefield is always a strategy of paramount importance. During World War I, Germany came up with U boat, the submarine, which could move below the surface of the water. The allied ships, which could only surf on the water surface, became their easy target. The heavy-weight smoke bellowing ships could scare hide between the sky above and the water below. Search for their camouflage led to a crazy idea: if you can’t conceal (from the enemy), confuse (the enemy) with paint of colour patterns. The idea, called dazzle camouflage, was instantly adopted. Little thought was given to its on-ground efficacy. But the tactic didn’t last for long.

Conventional camouflage was not tenable for warships

World War I was not the era of guided missiles which can hit moving targets with precision. The naval battle, then, was more about visual acuity and firing on an anticipated point in the distance. The U boats launched by Germany were capable of navigating below the surface of the water and emerge at a firing distance from the ships of allied forces. Something had to be done, quickly, to save allied warships. The general rule of camouflage is to blur the distinction between an object and its surroundings. Like a chameleon turning green in green foliage, and brown in a heap of dried leaves. But this couldn’t apply to ship floating between skyline and the choppy sea waters. Clouds form and disappear, the smoke from chimney leaves a trail which is hard to conceal. Add to this changing colours in the skyline, and it becomes clear that there could be no way out to merge the gross appearance of a boat with the unfolding of colour patterns in its background.

Hiding got reversed to brazen revealing

So, what could be the possible alternative? An out-of-the-box solution came from British marine painter Norman Wilkinson. His take on the problem was simple. Given that concealing of sea vessels was not possible, why not make them more prominent over the surface of the water? Prominence would be imparted by painting the body of the ship with myriad shapes and designs in bright colours. That would surely surprise, if not shock, the enemy. The new image of the ship would be a sharp departure from the image of it in the enemy’s mind. Hence, the opposite side is bound to be overawed with the spectacle. And that’s quite a gain in battle conditions which call for an unwavering concentration and a cool mind. The enemy is momentarily put on the back foot and forced to rethink on the offensive. The idea was called Dazzle camouflage. There are many references of such out-of-the-box fooling tactics in history. Like Horse of Trojan used by the Greeks to enter the city of Troy. The reference of a golden deer in Ramayana. It so enticed Sita that she compelled her husband Ram to get it for her. In fact, winning a battle has always involved conning of the enemy in some way or the other. Illustration of how a ship would look through a periscope with and without the dazzle camouflage. Dazzle camouflage also made it difficult to estimate a target’s range, speed, and heading.. (Wikimedia Commons) 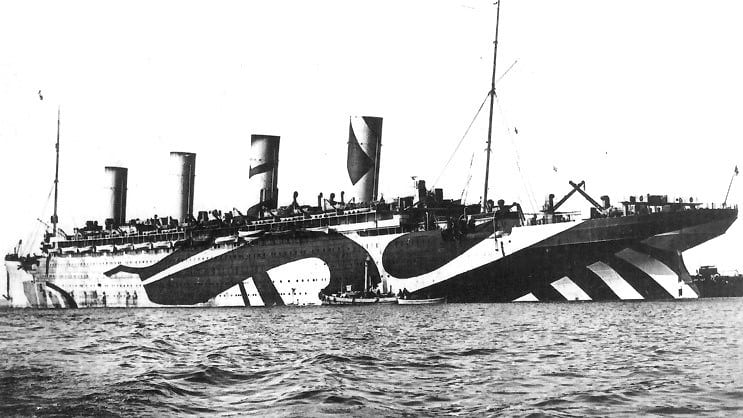 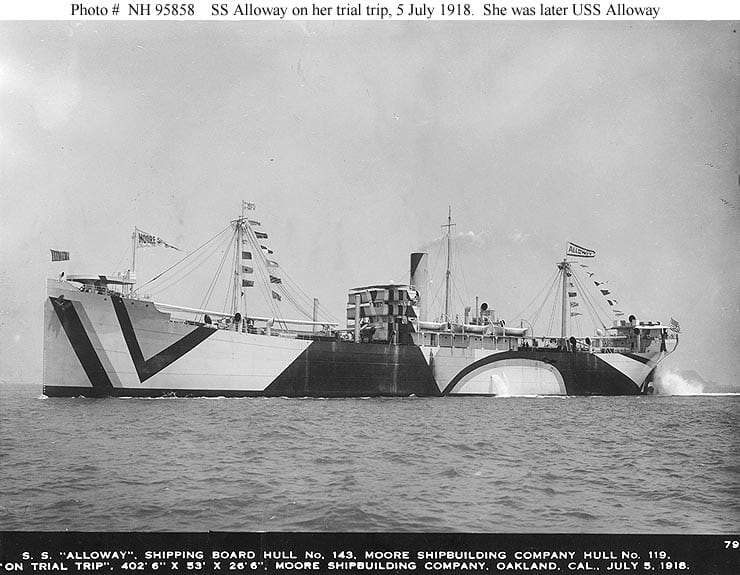 The very audacity of the idea was a dampener for the enemy. That is, a ship acquiring a more visible frame, as if to say: here I am, hit me. Understandably, the new look of allied warships challenged the sensibilities of a naval commander. Consequently, they erred in judging the distance of the ship and their gun/cannon fire strayed from the target. An experiment on sailing ships did support the idea to some extent. Some dazzle ships were presented for trial. Gunners were directed to aim at these boats and shoot. The gunners, in some cases, missed the target by as much as 55 degrees. Variegated shapes and patterns on ships were a positive drag on the aiming exercise of the opponent. Hence the boats escaped the enemy onslaught. The target being visibly different from one on which the enemy had practised in mock drills, proved to be an added challenge in the do-or-die battle situations and proved to be a disadvantage for the German Navy. That is, in those days of World War I when weapons were simpler and unsophisticated. 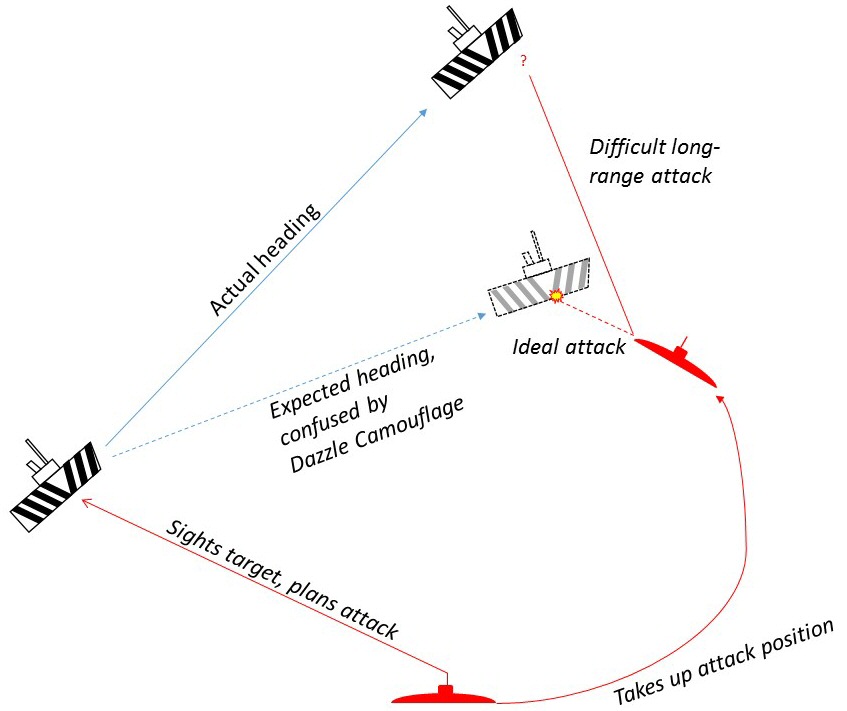 Not a sure-shot security feature

On the flip side, dazzle camouflage had its limitations. It wasn’t a foolproof security shield. A mail boat named RMS Leinster, done up in dazzle camouflage, was hit and destroyed by a torpedo. No wonder, the dazzle camouflage became redundant as sophisticated war weapons arrived on the scene during World War II. Reason being that the use of automated guns and ammunitions removed much of human guesswork in the war zone. Nevertheless, the dazzle camouflage is a part of history and a surreal lesson in psychological warfare.

Can be seen in the animal world Dazzle camouflage is very much a part of nature’s order. Zebras are a typical example. A herd of Zebra, from a distance, appears as a pattern of black and white stripes rather than a group of animals herded together. We humans can decipher the nature of this animal group from distance. But a wild predator may only see waves of white and black lines in the animal aggregation and may decide to change track. Thus the dazzle camouflage seems to pre-empt a possible predator attack on Zebras.

Seemingly derived from an art form

The idea of dazzle camouflage ostensibly came from an art form, cubism, invented by Pablo Picasso around 1907-08. Cubism is an exercise in abstracting a known shape and size. Picasso’s painting of human and animal forms, distorted to the hilt and were yet recognizable. Thus black and white geometric distortions, the dazzle camouflage, is a work of art in the same measure as a tool of camouflage in the battlefield of early 20th century.

Has applications in many other fields

Mitch Cope, co-founder Design 99 at Detroit, Michigan, has observed that buildings with design pattern were safer from vandalism as compared to those having no such design. Going by this premise, the Design 99 studio created abstract colour designs on abandoned housed, and claimed that it acted as a deterrent for the vandals and burglars.

So, like signage we see in market place and highways, coloured patterns have an indelible impact on our psyche. That this effect could be extrapolated on to a naval battle in World War I, will remain food for thought for defence experts as well as the professional painters/artists for all times to come.

Previous Article
Understanding Dictatorship – Why They Don’t Last and What Are the Early Signs of Dictatorship?
Next Article
Australian Bushfires: Deadly Yet an Inextricable Part of the Australian Ecosystem