World War Two was really no exaggeration in terms of linguistics. From mainland Europe to the North of Africa, naval battles at the bottom of South America, commando missions in the Northern ices of Scandinavia, jungle warfare within the thousands of islands dotted across the Pacific and even missions on Antarctica.

The United States of America was a major force in the war but did not join until late in proceedings following a strong non-aggression pact after the devastation of World War I. Their citizens did not want to meddle in European affairs. Expansionism from Japan and Germany changed this however bringing about a need to act but it wasn’t until the Japanese attacked the US Naval fleet on home soil (Pearl Harbour) that the President retaliated. Germany – allies of Japan – declared on the US which meant American soldiers would directly join the fight in Europe also.

Before the US even joined the fighting, they intervened. Having strong ties with the Allied Forces (UK, France and Russia) they passed an act which stated,

“… that the U.S. government could lend or lease (rather than sell) war supplies to any nation deemed “vital to the defense of the United States.” Under this policy, the United States was able to supply military aid to its foreign allies during World War II while still remaining officially neutral in the conflict.”

They gave much of this to one of their allies in World War One. At a time when Nazi Germany had overthrown much of France and had almost surrounded the British Isles the US kept the British people fighting. It meant they could keep competing against Germany until the Americans joined the fight.

The Logistics of War

Here are a selection of public domain photographs which show the aid which the US was able to send to the Allied Forces and of course use themselves. The 40’s brought about an economic boom with a wealth of manpower, natural resources and industrial strength. 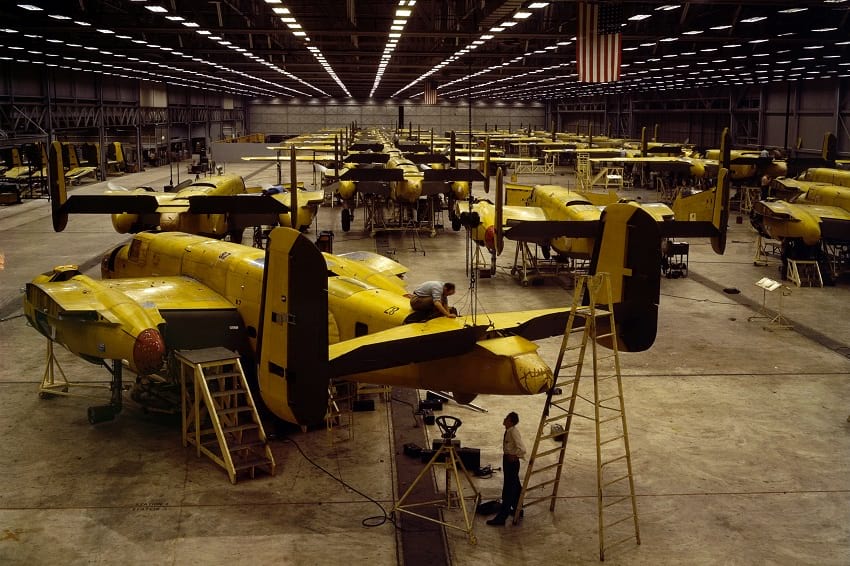 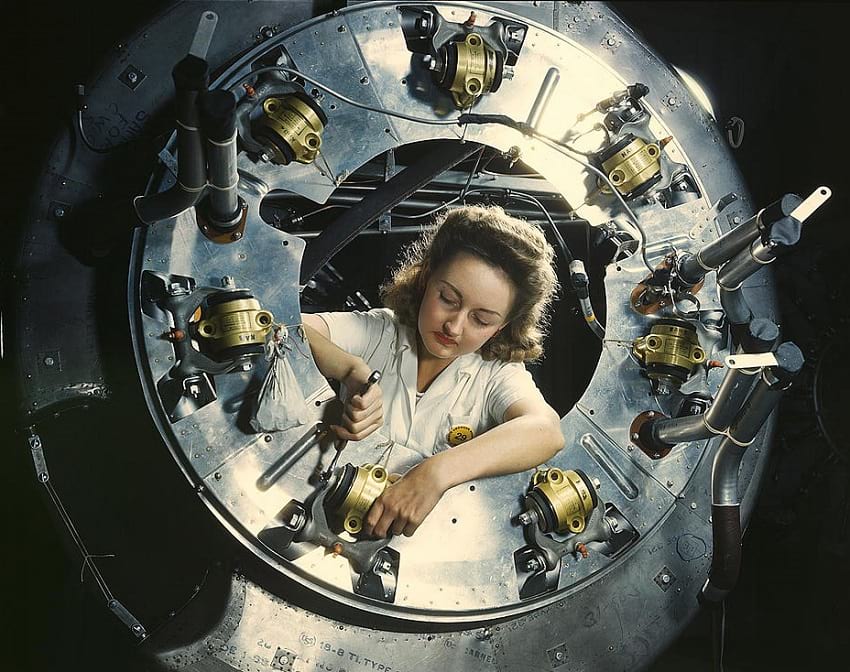 Part of the cowling for one of the motors for a B-25 bomber being assembled. (LOC)

The B-25 Bomber (The North American B-25 Mitchel) became one of the most famous aircraft of World War II due to its effectiveness and flexibility. Most notably it was used by the US in retaliation for the Pearl Harbour attacks by Japan but they were also sold to the British and Soviet Air Forces. It was the precursor to the B-29 which would transport and drop the Atom Bombs on Nagasaki and Hiroshima which would effectively signal the end of World War Two. 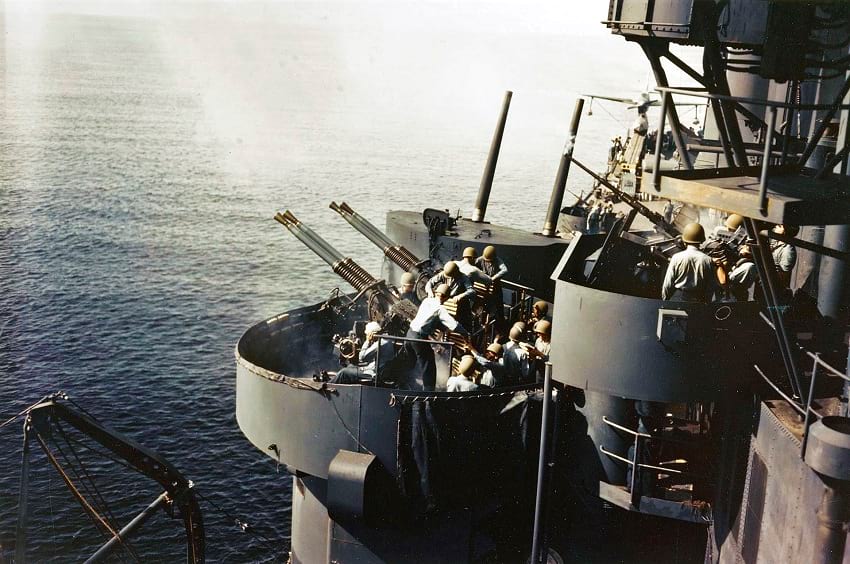 As important as aircraft in World War Two were naval craft. The USS Biloxi – named after a city in Mississippi – was a light cruiser type of battleship. It was built in Virginia by Newport News Shipbuilding and Dry Dock Company. Biloxi was awarded nine Battle Stars for services in the Pacific Campaign during World War II (Between the US and Japan) including the famous battle of Iwo Jima – a small yet important atoll near the Japanese mainland. Despite all of its service, Biloxi never lost a single crew member and only received small damages during a Japanese kamikaze bombardment towards the end of the war. The kamikaze fighter actually hit the deck of the ship but the bomb on board failed to explode. Half-Tracks – as the name suggests – are hybrid tanks with tank tracks at the back and wheels at the front. They make it possible to traverse various terrains at high speeds yet unlike tanks, they provided easier accessibility for transporting troops, if having to make a quick disembarkation for instance.

Alfred Palmer was a famous American photographer, most notably active during the Second World War. While rightly so, the allied soldiers, generals and world leaders gain most of the plaudits for their contributions to the war effort, photographers and videographers played an important role in making sure that the time was chronicled and while never be forgotten. Here is a staged photograph of an infantry man with an M1 Garand, a famous semi-automatic rifle at the time of the Second World War. It is immortalised in many video games such as Call of Duty and historic movies. Its bolt-action sound is instantly recognisable and brilliant for dramatic cinematography. The US Army started using it in 1936 after being developed in Springfield, Massachusetts. 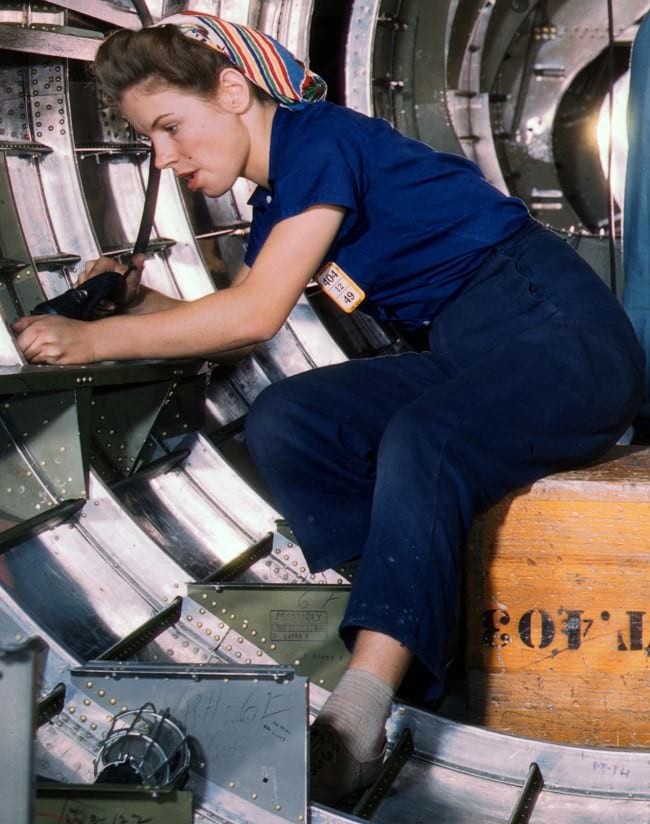 While most of the acclaim goes to males in World War Two, the massive contribution made by females largely goes unnoticed. However, 350,000 women served in the Armed Forces alone including pilots, navy and medics. By the end of World War Two, the percentage of female workers in the US rose to 37% and provided a great jump towards equality. 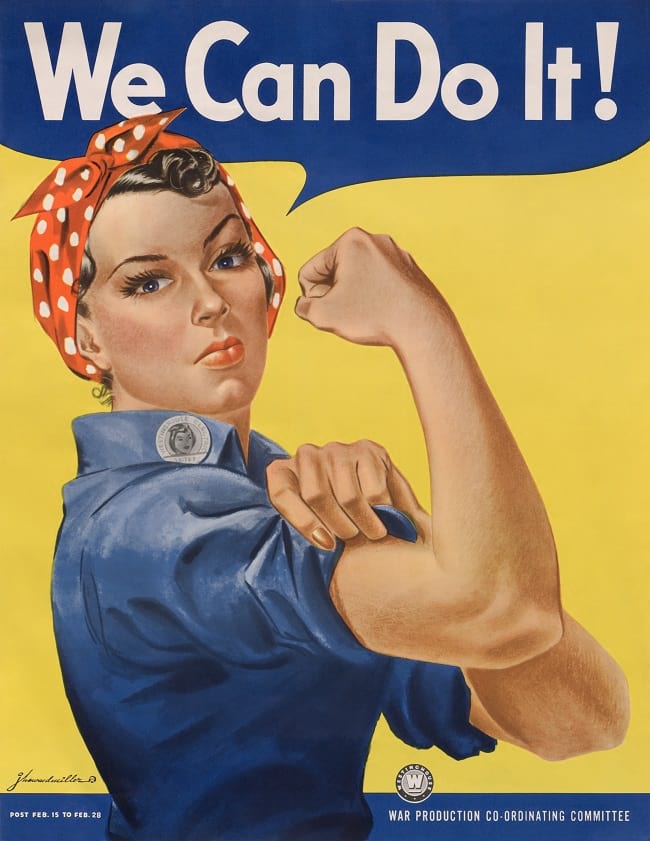 “We Can Do It!” by J. Howard Miller was made as an inspirational image. (National Archives)

For constructing planes alone (a massive factor in winning the war) women took up 65% of these positions compared to 1% before WW2. First Lady at the time, Eleanor Roosevelt encouraged women to sign up, largely inspired by British women doing the same in previous years. Propaganda such as a character called ‘Rosie the Riveter’ illustrated the effect a women could have in the war effort, not just on the front lines. A female Uncle Sam if you will. African Americans also had a vital part to play in World War 2. Similar to women, in previous years they were deemed by many sections of society as second-class-citizens but by the 1940s their positions had improved. Again, the war broke more segregation barriers, at least internally. 2.5 million African Americans registered for the war draft and achieved tremendous acclaim for their efforts. For example, Private Ernest A. Jenkins who was awarded the Silver Star for his part in the Liberation of Chateaudun in France. The star was awarded by famous General George S. Patton. This photo in New Orleans shows an Aviation Machinist, Signalman and two pharmacists at the finale of the Second World War. (U.S. Navy)

These photographs show the incredible logistics behind a war as huge as World War Two. The amount of time, resources and manpower needed as a starting point is absolutely massive in order to keep the armed forces stocked and ready to fight. Even before the US enters World War Two the fact they were supplying the allies such as Britain, France and Russia was an essential assistance. If they did not, perhaps Germany would have broken British resistance and been able to concentrate on the Soviet Union. Similarly, if they did not go to war with Japan, perhaps Japan would have gave the Soviets a bigger fight, which would in turn help Germany.

What these photos do not show is the abhorrent suffering which comes with war. It is a horrible thing. There are a few silver linings however such as the progression in terms of Racial and Sexual equality due to the war effort. This happened in many countries involved. And of course, the many unions created after the war in order to stop the same thing happening again. But it must be repeated that war is a crippling thing.

These photos, but more so photographs which show the sufferings of the war must be displayed to all. Such as the Nazi death camps, the starvation, separation and animalistic instinct which fighting brings. For as writer George Santayana states,

“Those who cannot remember the past are deemed to repeat it.”

Enjoyed this article? Also, check out “Dazzle Camouflage: The Wonder That Worked in World War I“.