Schwerer Gustav: Why the Largest Artillery Gun Turned Out to Be a Flop During World War II? 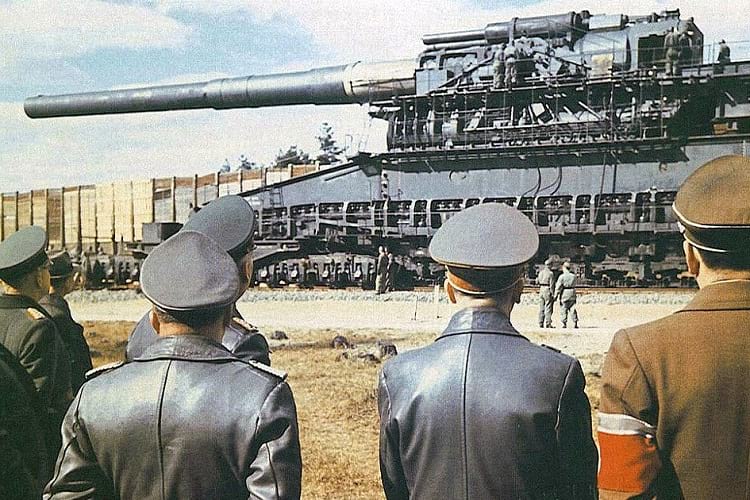 Once bitten, twice shy. This was true of Hitler, the infamous dictator of Germany. He served in the army of Bavaria (which became part of Germany in 1919) in World War 1 (1914-1918). When the Allied forces (France, Great Britain, Russia, Japan, Italy, Russia and the United States) defeated Axis powers (Germany, Austria-Hungary, and Turkey), Hitler felt devastated. World War II (1939-45) happened as a natural consequence of World War I. Hitler, by then, became the dictator of Germany, and longed for revenge. He conceived the idea of a really big cannon, Schwerer Gustav. One, that could demolish the Maginot line – a concrete fortification built in France. But the destiny unfolded otherwise. Hitler, and the big gun, both met a tragic end.

Behemoth of a gun

Schwerer Gustav, the Artillery, was a huge cannon designed by the Krupp company, a German steel and arms manufacturer. Work for the fabrication of the big gun began in 1930. The gunfire, ordained Hitler, must have the capacity to rip through 1- meter thick layer of steel, or 7-meters of reinforced concrete. The artillery, when finally commissioned, weighed 1344 tons and fired a 4.8 metric ton projectile at a distance of 48km, with a speed of 820 meters per second. The design of the cannon was approved in 1937. The spring of 1940 was set as the deadline for the rollout. But the deadline couldn’t be kept. In Hitler’s scheme of things, this gun, named Schwerer Gustav, would be the be-all and end-all of his victory in World War II.

Hitler invaded Poland in September 1939, this triggered the start of second world war. Schwerer Gustav, the giant cannon couldn’t be delivered on expected time, the spring of 1940. Luckily, the delay was no handicap, because, the war plan was altered in a big way. Maginot Line, which was the reason behind the big gun concept, was ignored. In the changed plan, the Germans invaded France through a different route, i.e. Belgium. By the end of 1940, the cannon was ready. It was test-fired in 1941 in the presence of Hitler. Seen as a gift from Gustav Krupp, the arms manufacturer, the cannon was named Schwerer Gustav. Schwerer in German means ‘heavy/great’. Another gun produced along with it was named Dora.

Schwerer Gustav was used in the war in 1942, with satisfactory results

The big cannon was deployed for action in the siege of Sevastopol, Ukraine, on July 1942. A men-force of 1420 took 3 weeks to assemble the big gun. In ready-to-fire mode, the artillery was 43 meters long and 7 meters wide. The inside diameter of the gun barrel was 80 cm. The axis of the barrel was positioned well over 7.5 meters above the ground base of 4 railway tracks (hence the name railway gun). The gun fired 300 shells on the city of Sevastopol, causing significant damage in the enemy camp. Another remarkable hit was at the undersea ammunition magazine of Soviet Naval base in Severnaya Bay. The ammunition magazine was kept 100 feet below the seafloor and topped over with 30 feet of concrete. Gustav’s 9 fires not only devastated this difficult target but also sank a ship that strayed into the firing range. 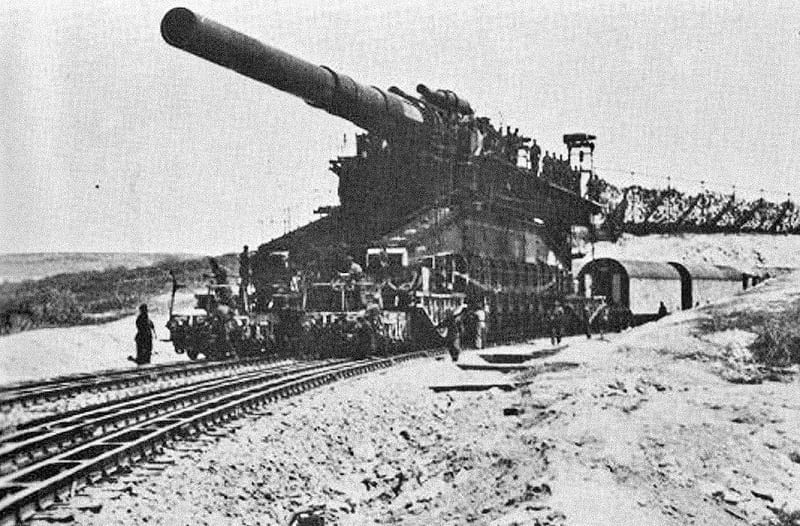 Dora, the sister cannon was deployed against the Stalingrad city in Southern Russia. But as the Russian force closed in, it was hastily withdrawn and wrecked to prevent its use by the enemy.

Massive frame of the cannon was hard to move and operate

The Germans realized soon enough that the mammoth size of artillery made it an easy target for aircraft of the Allied forces. Dedicated railway tracks had to be put up for the movement of the heavyweight Schwerer Gustav. The tracks had to be laid in advance at strategic places in the battle zone. A good length of supplementary track was also required to position the gun for the kill. From the firing position, the cannon could fire only in up and down directions, not sideways. For firing sideways, to the left and the right, a curved extension was mandatory. To operate the gun, a team of 2000 men was required. Most members of the team were engaged in giving air cover to the cannon. The Schwerer Gustav canon in position to fire. (Nazi Germany)

Assembling the gun into functional form was an arduous task. It took 4 days to assemble the 5 principal components of the artillery, and fit them into working posture. Calibrating the gun also took several hours to complete. Thus, the gun could fire only 14 rounds in a day. The delivery on the battlefield was little compared to the huge operating expenses of the weapon. No wonder, Germans abandoned the Gustav Gun within a year of using it. The gun, verily the largest ever in the history of mankind, was destroyed before the world war ended in the year 1945. This was done to prevent it from falling into enemy hands. Some sources say Russians seized the cannon and disassembled it. Some say Russians took away remnants of the gun already trashed by the Germans. 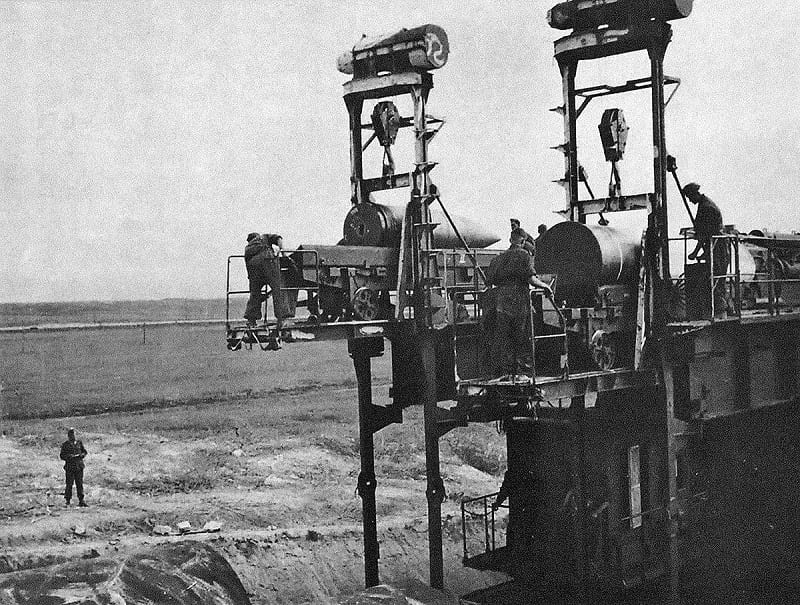 So, did the big gun make a difference to the outcome of World War II?

Surely not. Built at a whopping cost of 10 million German Reichsmarks, its output, in the overall war scenario, was lacklustre. All it did was to demolish a slew of Polish and Soviet defences. It may have been a psychological boost to Axis forces for some time, and a possibly a fear factor for the Allied forces. But at the end of the day, Gustav gun was more of a liability than an asset. The amount of money spent on its production and operation was too huge for its constrained application and performance.

Hitler, obviously, was so seized by the idea of the mega gun that he thought little about alternatives. Perhaps a more manoeuvrable and manageable weapon system would have been a better choice. Experts believe that the adoption of jet-engine aircraft, rocket technology and nuclear weapons would have stood Germany in better stead. The giant gun was no match to the speedier and more accurate fighter aircraft of the Allied forces. Aircraft could carry bombs and explosives much heavier than Gustav gun could fire.

What if Hitler had planned better, and won World War II? The hypothetical question Keeps doing round time and again. But the fact remains that fate of war rests on tactical planning and easy-to-use weapons. Hitler, seemingly, lost on both these counts. Warfare technology had changed significantly in the decade that fell between the 2 World Wars. Schwerer Gustav, though unique and powerful, was behind the contemporary technology in many ways and hence failed. 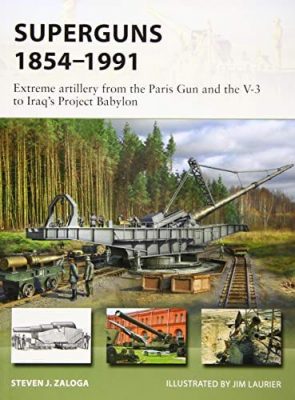