Iceberg B-15: The Largest Floating Object 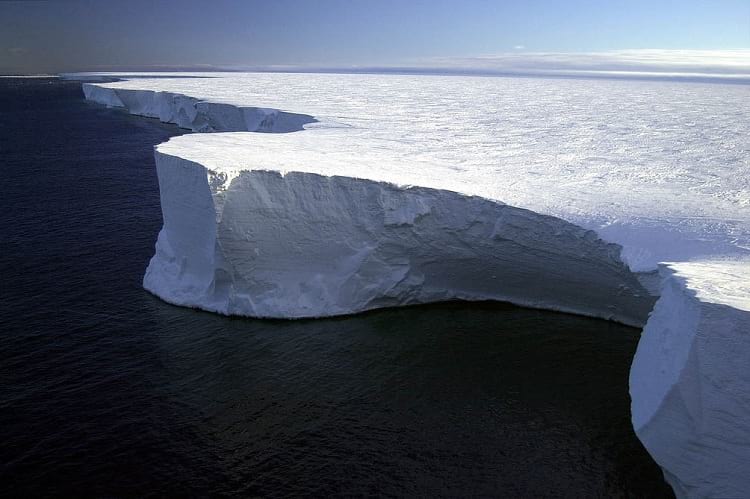 In the month of March 2000, the routine process of glacier calving at Ross Ice Shelf gave birth to the biggest iceberg of all times, Iceberg B-15. The B-15 was of a gigantic size. It was 295 km long and was 40 km wide, accounting equal to a total surface area of 10,915 square kilometers, larger than the island of Jamaica. The Chicago Tribune reported that “Scientists estimated that the new iceberg contains an amount of freshwater equivalent to the average annual rainfall on the entire land surface of Earth”. Earlier in 1964, before the era of satellite photography, an iceberg having a length of 333 km and a width of 100 km was reported to be floating in the Antarctic but estimates have been termed as unreliable due lack of any hard proof.

Researchers have been backing a study that claims that long-term natural cycle gives birth to these gigantic icebergs once every century or so. But they also fear the hand of the rapidly warming globe in putting the process of glacier calving on a fast-track. The Antarctic usually harbours bigger icebergs than the Arctic as it offers vast spans of uninterrupted oceans water, but, of course, an iceberg of this size was an object of fascination to the world and the scientist alike.

Scientists had been tracking the cracks Iceberg of B-15 for a long time and were expecting it to break away anytime. Overtime (2000,2002 and 2003), the Iceberg split into many daughter Icebergs, B-15A being the biggest one. An Iceberg of this size offered huge possibilities. Icebergs help scientist to study and understand the ocean currents.

As a result, on 29 January 2001, GPS and weather instruments were installed on B-15 A to monitor the nature of the giant iceberg as it made its way through the Antarctic waters. This was the first time an iceberg was being observed this way. Icebergs could survive for 25 years if they keep themselves harboured at their birthplace, in the frigid waters of Antarctica. However, if they move northwards, they are attacked by warm waters from all sides, shrinking their life.

No matter how peaceful these floating pieces of ice might seem, remember that it was an iceberg that sank the Titanic. The iceberg B-15 posed several threats since its inception. Perhaps the most significant one was to the cartographers of Antarctic. The daughter iceberg, B-15A, collided with the fragile Drygalski Ice Tongue on 10th April 2005, causing fracture and breaking off an 8 square-kilometer portion of the tongue’s mass. As a result, maps of Antarctic had to be redrawn.

Also, it made lives hard for the Adélie Penguins by blocking the pathway to open sea forcing them to travel a lot of distance to get back to their chicks and feed them. The result of this was catastrophic for the penguin population. The massive berg also blocked the route of supply ships, which supplied three research bases.

But, perhaps the most dangerous consequence that the iceberg poses is that it blocks the sunlight from reaching water, severely decreasing the production of phytoplankton. Also known as the microalgae, phytoplankton is the food producer of the marine food chain.

The fate of iceberg B-15

A study report of 2010 backs the fact that repeated grounding with the bathymetry near Cape Adare led to breaking up of the iceberg. Today, the might and grandeur of the B-15 has come to an end. Like any other iceberg, it met its fate. The iceberg split into daughter icebergs. Initially, only the major ones were tracked but still, the names of daughter icebergs went up till at least B-15 X.

But soon these daughter icebergs also started splitting, giving birth to smaller icebergs. The largest surviving fragment is the B-15T, accounting equal to a length of 52 km and width of 13 km. It was recently spotted by the NASA’s Operational Land Imager. 8 chunks from the original are claimed to be around the US National Ice Center (NIC). The agencies do not track icebergs smaller than 19 km and as a result, there might be thousands of pieces of B-15 floating around today.