Man must go wherever his work takes him. Work is also central to his settlement. So, when Willie Hutchison, in 1915, discovered opal- the precious stone, in the desert of northern South Australia, a stage was set for mining as well as the habitation of the area 846 KM north of Adelaide. In time the area became a township named Coober Pedy with most inhabitants living underground.

The logic behind underground homes is simple: a buffer against extreme variations of ambient temperature. At Coober Pedy, the average annual temperature ranges from 14 degree Celsius to 28-degree centigrade, and in peak summers it may touch up to 47 degrees Celsius. Inhabitants realized that ambience below-ground was more agreeable than above-ground. Miners working deep inside earth felt easy living deep down than living on the surface of the earth. If deep mines were so comfortable to work in, why couldn’t they have similar homes to live in? The Idea culminated in cave-like subterranean homes. 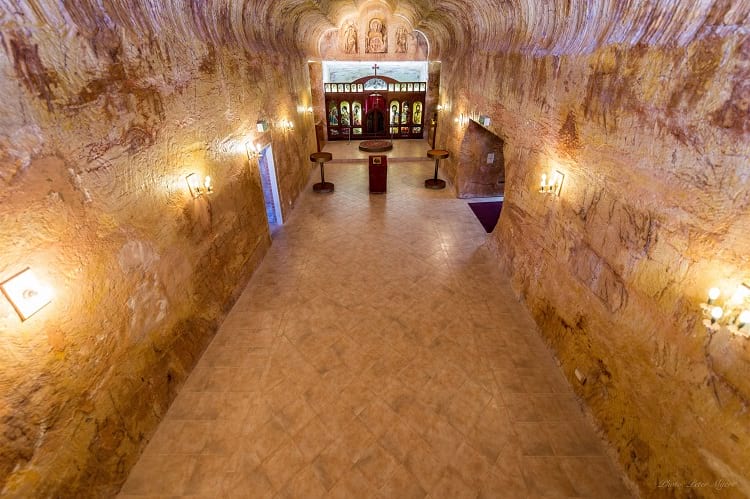 The interior of the underground Serbian church in Coober Pedy. (Peter Myers / Flickr)

Earth-sheltered or earth-bermed home is advantageous in many ways except for being flood-prone. If heavy rainfall or waterlogging is not a problem, earth homes are fun and best for living.

Apart from underground enthusiast group, even the U.S Department of Energy has endorsed dug homes where conservation of energy is a big advantage. The human settlement doesn’t stand out as odd protrusions on topsoil, and extremes of weather like strong winds, hailstorms, hurricanes and tornados do not ruffle the home dwellers. Earthquake and fire are no more significant threats and homes are surprisingly soundproof. Subsoil homes are also immune to manmade disasters like explosions, thefts and break-ins. In fact, privacy is served best in these earth embraced houses. 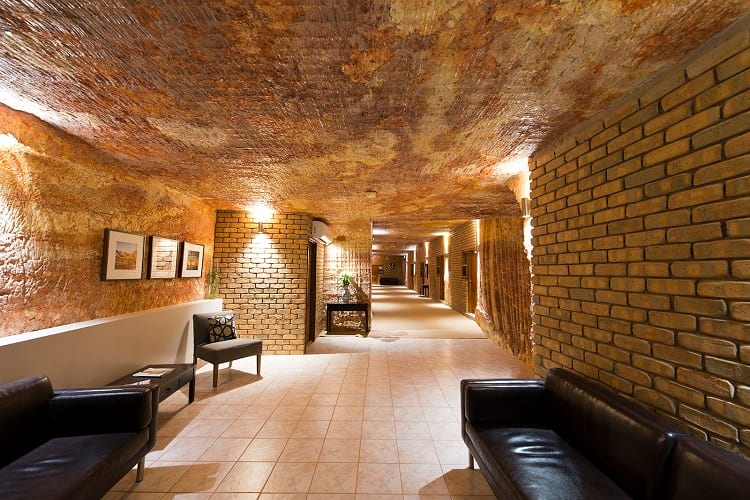 Underground dwellings in other parts of the world

Coober Pedy is neither alone nor the very first to subscribe to subterranean living. There are references to it in Scythian and German literature. Excavations have revealed the presence of dug homes in Switzerland, Mecklenburg and Southern Bavaria. Caves in mountains, as well as plain areas, have served humans as convenient living abode since pre-historic times.

Replace natural caves with designed and dug out cave houses and we get underground homes, buildings, cities and much more. Apart from Coober Pedy, dug homes are scattered all over the world. Sassi di Matera of Italy, Yaodong in China, Nok and Mamproug Cave Dwellings in Tongo and Africa are examples of famous deep dug buildings.

Earth bermed houses have one wall or one portion of house peeping out on the ground surface. Rammed earth homes, like traditional brick constructions, are not underground in a real sense but are tightly hugged around by mud on the ground surface. Free from the binding quotient of cement, rammed homes are adequately insulated against vagaries of the environment.

Another variety of earth home is cut-and-cover type or culvert structures. These are precast homes. The entire architecture is frame-casted, assembled, and then lowered down the hole. Subways and basement buildings are so common these days that we scarce think of them as underground structures. Yet the fact remains that these are underground abodes. Tunnels too are a way of living underground. Taisei Corporation’s proposed Alice City in Tokyo is going to be a milestone of this genre. It would be a massive shaft carrying various levels of office, residential and multipurpose living spaces deep inside Earth.

Geologically, Coober Pedy is situated on 30 meters deep bed of sand and siltstone topped with a treeless desert. It is home to a population of 3500, 45 nationalities 60% of which are Europeans. It is a popular tourist destination since 1987. Annual rainfall is lowest in Australia, making it an ideal place for underground houses. Aerial view of the area is plain desert except for scattered chimneys, the ventilation outlets, jutting out on earth surface from the living spaces below the earth surface. A barren topography though hasn’t robbed natives of sports and recreation. Daytime being too hot for a game, golf is played at night with a glowing ball. Australian Rules football club organizes football in a professional way. The scenic beauty of the town has attracted filmmakers and many films like Opal dream, Wim Wenders and Until the End of the world.

On the flip side, the cost of constructing an earth-sheltered house is comparatively higher. However, options to build are as diverse as in building over ground houses. With global warming touching a new high with the passage of time, it may not be surprising that earth houses become more of a rule than an exception.

Previous Article
Iceberg B-15: The Largest Floating Object
Next Article
The Five Punishments for Chinese Slaves