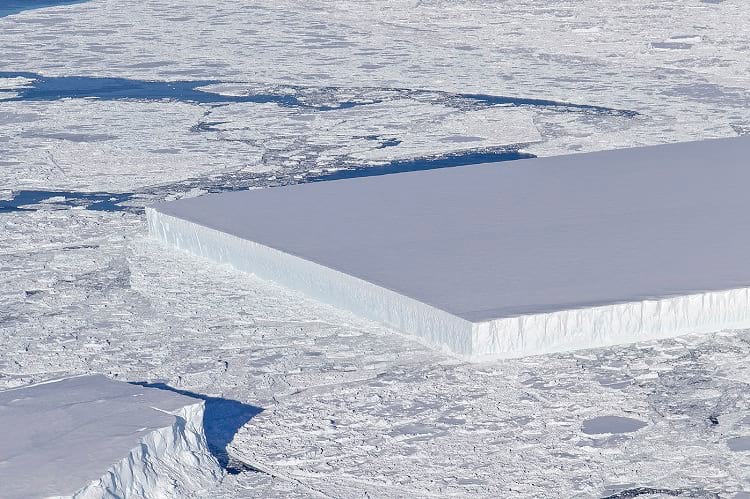 On 16 October 2018, Jeremy Harbeck, a senior support scientist with NASA’s Operation IceBridge, encountered a peculiar phenomenon in Antarctica that has generated a great deal of interest around the world. While carrying out an aerial survey to record changes in the heights of the glaciers in the Larsen A, B and C embayments in the northern Antarctic Peninsula, the scientist came across two recently detached, rectangular icebergs near the Larsen C glacier, with one of them having sharp angles and straight edges. Almost as though someone might have used a chainsaw to make them so perfect.

NASA, however, assures us that it is all Mother Nature’s doing.

Rectangular icebergs are nothing new, they tell us. In fact, they even have a name for these regularly occurring icebergs. They are called tabular icebergs, and they occur when a section of a glacier or of a larger iceberg cracks and breaks off from the edge. Their sharp lines come from the nature of the ice crystal structure, and the sharper the lines, the more recent the break. NASA uses the phrase ‘freshly calved’ for newly detached icebergs. As with many icebergs, only a fraction of the total mass of tabular icebergs is visible above water, while the greater portion remains out of sight underwater.

That is likely the case too with the recently spotted rectangular icebergs and the many other trapezoid-shaped icebergs that the NASA aerial photos show floating in the area.

None of these other icebergs, however, have quite the sharp-lined silhouette like that of the iceberg that amazed the NASA scientist. It is a pity that the NASA crew didn’t think of sending a drone to give us a close-up capture of those perfectly straight edges. Operation IceBridge is the codename for NASA’s program to survey and document the state of the ice in both the polar regions, in Greenland as well as in Antarctica, capturing changes in the ice in spring in the first and in autumn in the latter.

NASA, originally, began their survey of polar icecaps in 2003 with the launch of their Ice, Cloud and Land Elevation Satellite (ICESat). This satellite deorbited in 2010 and NASA sent out a second, ICESat 2, on 15 September 2018. There has been a considerable gap in the collection of data between the operations of these two satellites, and Operation IceBridge is meant to narrow the difference. In addition to monitoring the ice, the ICESat mission also collects cloud, weather, land, and vegetation data. For the recent survey, Harbeck and his crew flew to Antarctica from Chile’s Punta Arena.

It’s not even the first of April and there are many strange occurrences in nature, so, yes, maybe there could be an iceberg with perfectly rectangular sides. Why not? Besides, we have seen the NASA photographs, and so what if there are diehards that always doubt NASA’s photographic evidence?

Jan Lieser, who works with the Antarctic Climate & Ecosystems Cooperative Research Center as a marine glaciologist, endorses NASA’s claim that ice sheets with straight edges and sharp corners are nothing out of the ordinary. He has personally seen plenty of such icebergs in the course of his work in Antarctica.

That may very well be the case.

But, on the other hand, we mustn’t completely abandon the scientific mindset and scientific scepticism.

The real point of the hullabaloo doesn’t seem to be so much about a rectangular iceberg as about highlighting the fact that chunks of icebergs are falling off the ice shelf.

Because of global warming, of course.

A survey of mainstream media news outlets featuring this story shows a majority of them repeating this mantra. We hear yet again that the polar ice caps are melting, and the sea ice is disappearing, and the sea-levels are rising. We shall all soon experience global warming first-hand if we haven’t done so yet. Global warming is the term used to describe the phenomenon of the earth becoming progressively warmer, largely due to the nefarious activities of mankind.

It is a popular topic, not just amongst climatologists, but also with the general public, and to such an extent that it has even had many Hollywood actors and actresses shilling for it. The actor Leonardo DiCaprio – he of the Titanic fame, the film, you know, about the unsinkable ship that an iceberg sank in two hours and 40 minutes – is one of the more well-known faces. He is passionate about global warming. So passionate, in fact, that he used his Oscar spotlight to deliver a speech about how manmade activities are driving up global warming and how all of us should be held accountable for the sacrilege to Mother Earth. If he didn’t hold himself accountable for the extra CO2 that Mother Earth gets when he travels around the world on his personal jet, it may have been out of the courtesy of not taking up the stage time of the luminaries following him.

We have yet to hear from him or any other over-lionized public figure about how certain countries of the world are accelerating global warming with the after-effects of the many bombs they drop on other countries.

While certain manmade, non-war activities can certainly be destructive to our overall well-being and ought to be curtailed as much as possible, it is important to remain rational and avoid all forms of hysteria. Sensationalizing issues is something that the mainstream media has long been adept at. Now we have rectangular icebergs, a while back there were the mysterious crop circles. That had to be proof that there were aliens on earth. No, it only highlighted that there are pranksters on this planet.

Many scientists and researchers, including former scientists from NASA itself,  have gone on record accusing NASA and other governmental agencies of fudging climate data over a very long period. Why would these agencies do this? Perhaps because fighting global warming is a politically-motivated billion dollar industry.

Before warning the world about the perils of global warming became their popular pastime, NASA, NOAA, and others of their ilk were banging the drum about the coming Ice Age.

They should have continued with it as it appears that the Arctic and Antarctic sea ice is at record high levels in 2018.