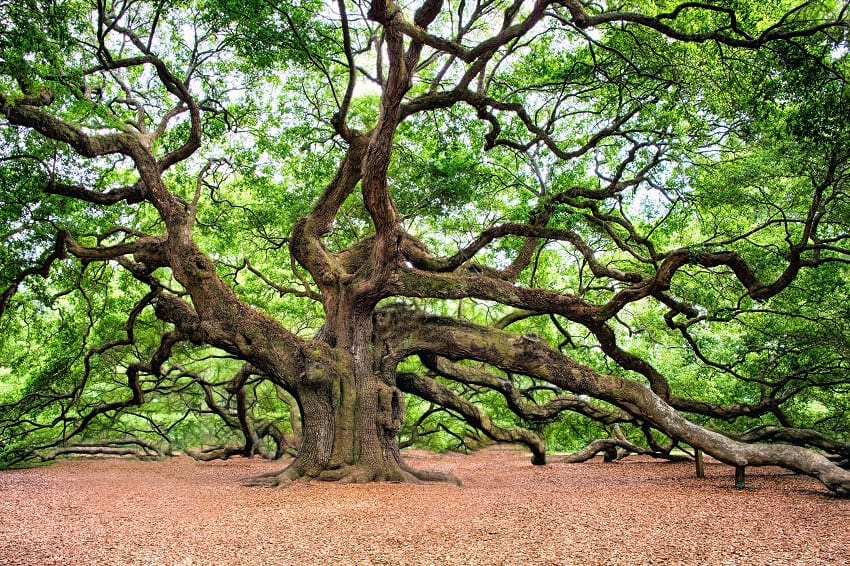 Approximately 4 to 5 centuries ago a majestic tree by the name of the Angel Oak grew in Angel Oak Park near Charleston on Johns Island. The Angel Oak, also a Southern live oak, situated in South Carolina stands tall at 66.5 ft (20 m). The scientific name of this variant of oak is Quercus virginiana.

The Angel Oak, being one of the oldest oaks in Southern Carolina has a circumference of approximately 28 ft (8.5 m) and it produces shade that covers roughly 17,200 square ft. The longest branch of this tree is said to be at least 187 m. The magnificent tree was also registered as the 210th tree by the Live Oak Society.

What’s so angelic about the Angel Oak?

The Angel Oak derives its name from the couple who owned the Angel Estate, Justus and Martha Waight Angel.

According to records of ownership, the tree and the land on which it stands, belonged to Abraham Waight, who was given the land as part of a land grant in 1717. Abraham Wraight was a very rich man, who was also the owner of several plantations. The land had been in the Waight family for many generations and was one of their most valued lands. In 1810, when Martha Waight Tucker married Justus Angel, the estate was a part of their marriage settlement which was a norm in those times. Today, this magnificent tree is the focal point of the Angel Oak Park in South Carolina and is owned by the city of Charleston.

Some people may claim that the Angel Oak is the oldest tree found to the east of the Mississippi River. However, there are many bald cypress trees that can be found throughout North and South Carolina that are estimated to be much older.

Local legends state that appearances of ‘angels’ around the tree that happened to be the ghosts of former slaves adds another layer of meaning to the name of the tree.

In 1989, the Angel Oak was severely damaged during Hurricane Hugo but it has recovered since then and continues to grow. Southern live oaks are said to be native to the lowland country. They are said to grow more outward than upward. However, due to its age, the Angel Oak does both. The branches of the tree extend in all directions, with some going underground and then growing back up above the surface. The tree’s trunk is extremely heavy and large, with some branches dropping to the ground which is a popular trait of extremely old oak trees. Over the years, the Angel Oak has survived rough weather including hurricanes, earthquakes, floods as well as human interference.

Recently, there was a plan for apartment development near the mighty Angel Oak, which was scrutinised and fought against by South Carolina Coastal Conservation League. They argued that the development of the apartment complex would alter the flow of groundwater to the tree. This would clear the “nearby forests whose root systems” were intertwined with the Angel Oak.

The Angel Oak is also said to have featured prominently in Emily Nelson’s novel “The Heart of a Child”.  The area also hosts a number of artistic social events throughout the seasons of spring and summer. In 2000, it was acknowledged as a Millennium Tree, and it was the South Carolina Heritage Tree of the year in 2004.

Why visit the grand Angel Oak of Charleston?

The elegant tree and the surrounding greenery make it a popular and grand venue for several events like professional photo shoots, receptions and weddings. The Angel Oak serves as a magnificent backdrop for almost any occasion. For all the shutterbugs and people who love to be photographed, the Angel Oak provides one of the best photo opportunities. Its position also affords a beautiful panoramic view of the area.

There are also several picnic spots near the precious Angel Oak. Visitors are allowed to have a picnic and enjoy the view under its huge canopy. The entire atmosphere exudes a certain serenity and quiet warmth.

There are a host of local gift shops in and around the area that have photo prints, postcards and other items. If you take a tour around the city, you will notice that most of the small tourist shops are quite vintage in their setting.

There have been several indirect threats against the Angel Oak, because the trees in the surrounding forest were going to be felled. It affects the tree’s root system and the ecosystem surrounding it. During a torrential downpour, the surrounding trees are what protects the Angel Oak’s root system and prevent heavy erosion of the soil. They provide “shelter from storms” and also provide adequate moisture and drainage. It is absolutely essential, thus, to not only focus on the tree but the protection of its surroundings which sustain it. Before reaching the tree’s roots, bark, and leaves, it filters several harmful pollutants. Consequently, any development around it could be harmful to its survival. The South Carolina Environmental Law Project and the Lowcountry Open Land Trust deserve much credit for their work. Their efforts are behind the Angel Oak still standing tall and proud today. In order to prevent the limbs from breaking off, adjustments have been made to the ancient tree. Wooden and metal posts have been put up, along with steel wires, to help the larger and more unstable branches.

An Experience to Remember

Located at 3688 Angel Oak Road, it is 12 miles from downtown and is surrounded by unique restaurants nearby. One of the many wonderful restaurants is the ‘Fat Hen’ which has a “French Lowcountry dining experience”. They serve dinner six days a week and are renowned for their scrumptious Sunday brunch. There are several other tasteful restaurants that may be found in Johns Island near the Angel Oak.

Enjoyed this article? Also, check out “The Story of the Last Tree of Ténéré is Short and Sad“.

Previous Article
Roopkund Lake: What are Hundreds of Bones Doing Around a Lake in Uttarakhand?
Next Article
Sergei Krikalev: The Time Travelling Cosmonaut