The Near Endangered Honduran White Bat of Central America 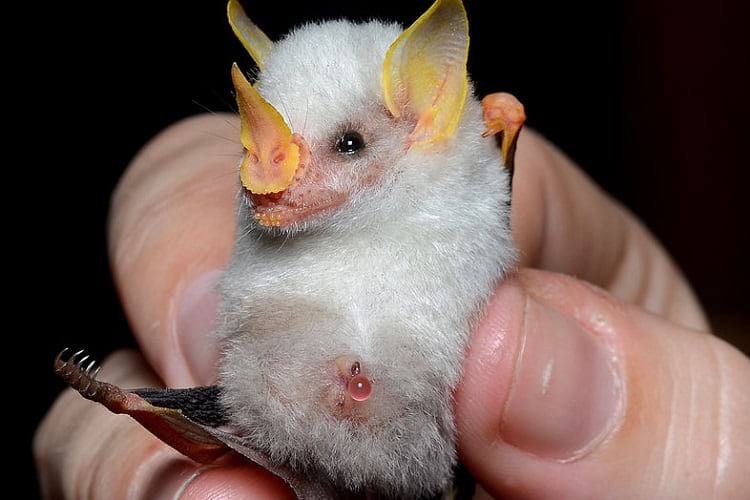 Found within many countries of Central America, the Honduran White Bat – like many animals in the world today – is at the fear of extinction albeit at the safer end of the IUCN spectrum. The creatures are considered ‘Near Threatened’ on the International Union for Conservation of Nature scale. This means their struggle has not yet been taken seriously in terms of a worldwide acknowledgement. That is on the basis that even ‘Critically Endangered’ animals do not get sufficient attention with many species already extinct.

There are many reasons why this particular bat is special but one, in particular, is potentially beneficial to the human race. If that is a justified reason then these creatures should certainly be saved. And that is just one attribute which has been discovered. There may be more found once the elusive mammals are studied further.

First we will have a look at the animals which many view with horror owning to the fact that many of their brethren are bloodsuckers. The famous myth of the Vampire contributes to this. However, these Hondurans are frugivorous, surviving almost exclusively on the fruit called ‘Figs‘. The largest to have been found are only 4.7 cm tall, extremely small and extremely light – at most, 5.6 grams.

They have almost all-white fur which is actually very uncommon; only five species of bats have this make-up. The main difference is the yellow parts on their face. In particular their ears, nose and lips. This colouring is caused by a chemical called carotenoids. Discovered in 1892, they are the first and only member of the Genus called Ectophylla which if you are interested in Etymology comes from the Greek for Leaf and Out – referring to its leafed nose.

Another name for this species is the Caribbean White Tent-Making Bat which illustrates its lifestyle. They make a habitat for themselves by cutting the vein of a leaf to make it fall into a tent shape. Nocturnal, they will roost here during the day and at night they will leave to look for food using the famous sonar system otherwise known as Echolocation (a similar system to dolphins and whales).

This tent system is extremely beneficial, keeping them protected from predators – an extremely intricate example of evolution. They remain in small colonies, clinging to the roof of the leaf until it dies and disintegrates. Although they will have a green hue within the leaf because the leaf is not completely closed they will sometimes be spotted by predators. However, if their white furs are spotted, many predators will assume them to be a wasp’s nest and stay clear. These predators include monkeys, owls, snakes and raptors.

As many as twelve bats can stay in the same tent for as long as 45 days which includes giving birth and guarding the young until they are fit to fly (which takes no more than 5 weeks). This is a small amount of their lifespan as although an exact number is unknown, members of the same genus can live up to seven years. And other species up to seventeen. Scientists believe these tent-makers to be somewhere in between these two numbers. Why is the Honduran White Bat important?

As mentioned, the most important fact about these mammals relates to human health. So far they are the only animals discovered to be able to generate a visible colour change. The yellow parts; ears, nose and lips come from a chemical called carotenoids. The Honduran White Bat can perform a mechanism which uses this chemical to change skin pigmentation. The conversion of it is said to protect their retinas and conserve eyesight.

As contrary to popular belief bats have fully functioning eyes, they are just more active at night. The phrase ‘Blind as a Bat’ being a popular misnomer. Lutein is the name of said carotenoid which is found in the fruit eaten by the bats. It has been found that the animals are able to covert that Lutein into an esterified version which has many beneficial properties. With human eyesight, another well-documented problem, finding out how the bats convert this Lutein could solve many problems among humans and other animals.

A problem here is that the bats are threatened due to human expansion. Deforestation of the rainforests in particular, with farmlands taking over much of the land. As their diet is so reliant on fig trees this makes it difficult for them to adapt. Without mentioning whether losing a species like this is unjust or not, as it the case with many plants and animals they have desirable traits which could benefit mankind. Alas, these are dwindling as their ecosystems change and every day more and more secrets are lost forever.